Residents of Ranaghat ‘district’ want to keep legacy and culture 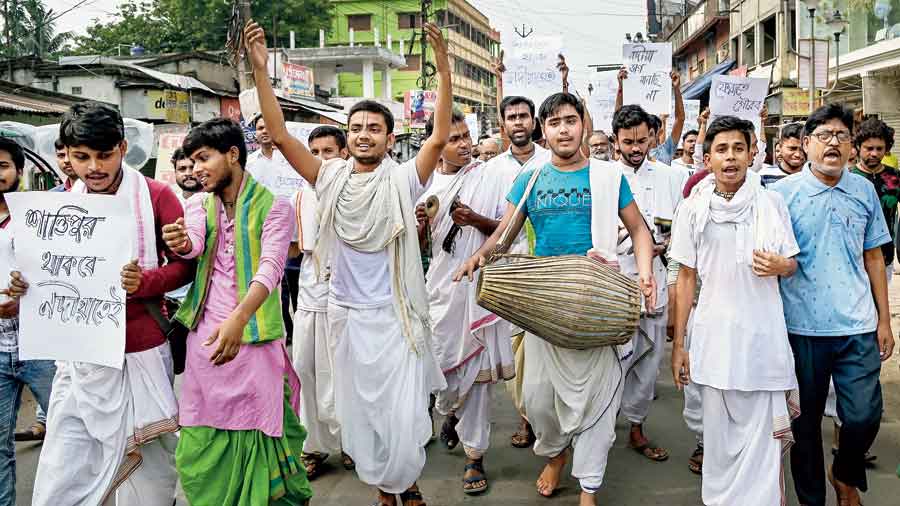 The Mamata Banerjee government’s decision to carve a Ranaghat district out of the existing Nadia district triggered protests on Tuesday with many complaining that the new administrative area would take away their rich culture and heritage associated with Nadia.

The government had on Monday decided to create seven new districts in south Bengal.

There was disgruntlement in north Bengal also as the government didn’t heed the longstanding demand to create new districts out of the existing Darjeeling, Malda and North Dinajpur.

Protestors gathered in large numbers at Krishnagar and Santipur in Nadia district and put up road blockades on Tuesday demanding the rollback of the decision. The demonstrators said the new district, which would be called Ranaghat, would deny them the pride and identity associated with the rich culture and heritage of Nadia that had witnessed the emergence of the Bhakti movement expounded and led by Mahaprabhu Chaitanyadeva.

“It is hard to accept such a division that seeks to wipe out the name of Nadia. A large section of people in the district is emotionally attached to Lord Chaitanyadeva,” said Kaushik Chattopadhyay, a playwright and director who joined the protest in Santipur. “For over 1,000 years, a unique identity remained with Nadia for its rich heritage, tradition and culture which cannot be ignored just for administrative compulsions,” he added.

Sanjit Dutta, a former librarian who authored many books on Nadia, finds a similarity in the Mamata Banerjee dispensation’s decision with the British government’s Bengal Boundary Commission’s order dated August 15, 1947, for the bifurcation of Nadia.

“Kushtia went to East Pakistan (now Bangladesh). But in February 1948, barely within six months, the Indian government renamed the Nabadwip district as Nadia, respecting the emotions and sentiments of people. The state government’s order is quite similar to that and I hope history will be repeated and Mamata Banerjee will change her decision,” said Dutta.

Sources at Nabanna said the government was considering the possibility of naming the two new districts as North Nadia and South Nadia.

In north Bengal, a number of organisations in Siliguri have been demanding the formation of new district with the town as the headquarters. Siliguri is in Darjeeling district and it takes four hours for people to reach the headquarters — which is 80km away — because of the hilly terrain.

“We are disappointed because Siiguri deserves to be upgraded as a separate district,” said Ratan Banik, a general secretary of the Brihattar Siliguri Nagarik Mancha.

Residents of blocks which are in the northern parts of Malda also expressed their disappointment. “From Harishchandrapur, one has to travel 90km to reach the district headquarters. The chief minister should understand our inconveniences. Same is the situation in Islampur subdivision of North Dinajpur district. The distance between Chopra, the farthest block, and Raiganj, the district headquarters, is 130km,” said Dipankar Ram, a resident of Harishchandrapur in Malda.