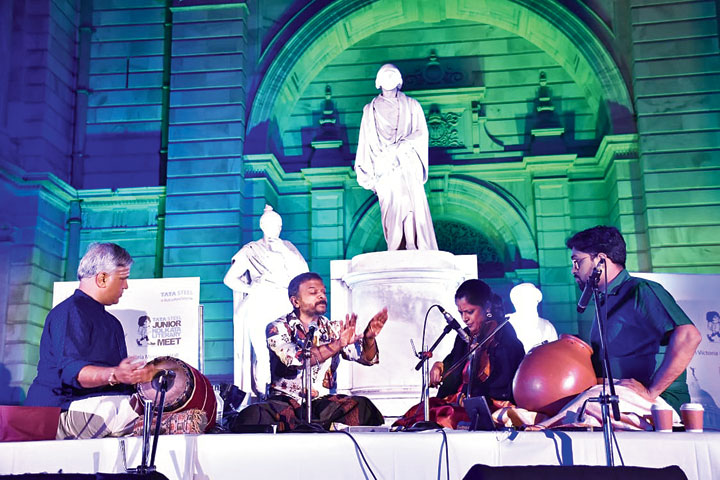 T.M. Krishna problematises everything. Krishna, the redoubtable Carnatic classical vocalist and activist who is given to questioning every hierarchy, within music and outside, spoke about his new book, Sebastian and Sons, on Friday afternoon at the Tata Steel Kolkata Literary Meet. The event is held in association with The Telegraph.

As usual, Krishna spoke passionately and hit the nail on the head, but kept his sense of humour intact. The conversation was conducted knowledgeably and sparklingly by Arunabha Deb, who counted three jibes made by Krishna by the end of the session.

A problem had led Krishna to write this book in the first place.

“Failure drove me to the book,” he said. Because of his caste, among other things, he had been privileged all his life. That is one problem.

When he wrote his first book, A Southern Music, which explores the politics, history and sociology of Carnatic music, there was something amiss. “My first book did not mention something,” he said. He had not said anything at all about the makers of the instruments. “I had no knowledge about the makers.”

So his latest book is meant to revise that. The mridangam player is “closest” as an accompanist to the vocalist. The superior position enjoyed by the vocalist in relation to his accompanists is another hierarchy, but one thing at a time. Who makes these wonderful instruments that so enrich the performance of the music?

Krishna’s journey led him to the mridangam-makers. Theirs is not an easy livelihood and neither does it last an entire lifetime, as it requires physical strength to make these instruments. And much more. “They know exactly what a musician is saying, his idea of music, his idea of beauty. That’s artistry.”

But the mridangam itself is a problematic thing. A closer look at the relationship between its making, its makers and its players is complex, fascinating and troubling, like a lot of the politics happening around us today.

The mridangam is a paradox. The two-headed “king of percussion”, without which the sound of Carnatic music cannot be the same, is made of cowhide. Therefore the makers of the instrument have been traditionally Dalits or Dalit Christians, but its players and connoisseurs traditionally Brahmin and elite.

The history of the mridangam, as a result, has been a history of its erasure, for its users have tried to not see what it is. Krishna’s interest in his subject had a lot to do with his engagement with caste politics and “the idea of the skin”.

There is not only myth, but also vocabulary. “In Tamil, ‘thol’ means ‘skin’ and ‘thattu’ means ‘plate’. Mridangam players will talk about thattu, but not about thol,” Krishna said. “These were all ways of distancing.”

A mridangam-maker had told him: “My existence is cardinal to transforming the ‘untouchable’ to that which can be ‘embraced’.”

One chapter of the book is about a visit to the abattoir, where the skins are bought.

It was important for Krishna to show the place from where the hide becomes the vehicle of artistic expression. “An incredible instrument is being made,” he said, from blood and gore. “Where do I place myself? What do I tell a vegan?”

The mridangam is said to be the sound of Nandi, Shiva’s bull. But for the mridangam Nandi is also being killed, he asks.

There are no easy answers, of course. The synthetic mridangam is certainly not one. Sometimes just seeing the problem is taking a step,

Krishna suggested. Do we stop listening to Wagner because of his anti-Semitism? “But you can create a little mess about the way you listen to Wagner,” Krishna laughed.