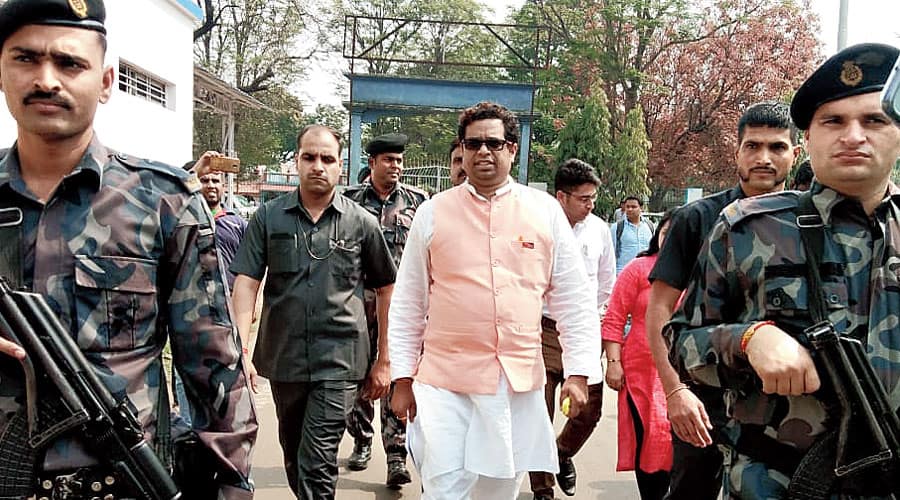 After the poll results, only the 77 elected MLAs were included in the protection programme.
File picture (Representational)
Arnab Ganguly   |   Calcutta   |   Published 09.09.21, 02:47 PM

The Union ministry of home affairs has quite literally left 61 BJP MLAs in Bengal to the mercy of the Trinamul government. For, according to sources, late on Wednesday night the ministry headed by Amit Shah informed the Bengal government that it had decided to withdraw central security provided to all of them.

It would now be the prerogative of the state government to provide security cover to the 61 out of 71 remaining BJP legislators who were granted protection by central forces because of their party affiliation and not threat perception.

That is however not to say that the Opposition MLAs, or any political leader, in Bengal do not face any threat to their lives. A couple of days ago, bombs were hurled at the house of  BJP Barrackpore MP   Arjun Singh, who was with the Trinamul earlier.

According to sources, some of the most prominent BJP legislators like leader of the Opposition Suvendu Adhikari will continue to be under central protection. Suvendu had earlier refused state security cover.

The spate of defections before the Assembly polls from the Trinamul to the BJP had sparked genuine scare among the turncoats of a possible backlash from their former party supporters. Before the elections close to 168 Bengal BJP leaders irrespective of their status within the party were granted central security, which became a talking point for the ruling Trinamul in the run up to the polls.

After the poll results, only the 77 elected MLAs were included in the protection programme. A section of the newly elected BJP MLAs, too, were uncomfortable moving around with gun-totting security personnel.

In the four months since the elections concluded, around four MLAs have reversed their course of action and switched to the Trinamul from the BJP. The home ministry had earlier withdrawn security provided to the first defector, Mukul Roy, and his son, Subhrangshu.

On Monday, the Trinamul’s All India general secretary and Diamond Harbour MP Abhishek Banerjee had claimed in Delhi that at least 25 more BJP MLAs were  keen on switching to the Trinamul.

Sources feel the central BJP leadership does not want the burden of possible turncoats on the state exchequer and has, therefore, left them to their own devices till the next elections.

However, what exactly led to the withdrawal is not clear. Sources said on September 1, Abhishek and state minister Moloy Ghatak had a meeting with the Union minister and RSS’s most trusted man in the government Nitin Gadkari. The two flew to Delhi from Andal in a chartered flight and returned the same way.

“What exactly transpired at the meeting is not known. But whatever has happened since, including the delay in announcing the party nominee for Bhowanipore and this decision to withdraw central forces for BJP MLAs, comes after that meeting,” said a source.

Interestingly, Adhikari himself was in Delhi on Wednesday and also met Gadkari among other leaders.