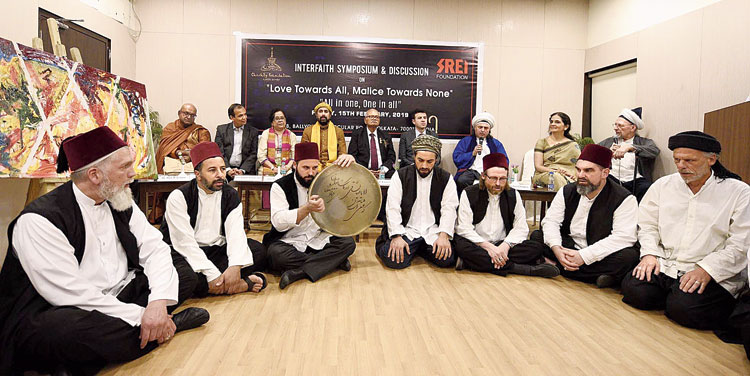 Amplify voices of love, not hate, a custodian of Dargah Ajmer Sharif said during a visit to the city on Friday.

Haji Syed Salman Chishty, the chairman of Chishty Foundation-Ajmer Sharif — an outreach organisation — attended an interfaith symposium in the city.

“The voices of love, understanding, cooperation and human service need to be amplified on a larger and a greater scale rather than the voices and vibes of hate, which come across,” Salman Chishty said.

“The greatest challenge, of course, is when we see… those voices coming to the forefront just to spread hate. That is not the India we have always lived in and we were born and raised in,” said the 26th generation Gaddi-Nashin (hereditary custodians/key holders) of Sultan ul Hind Hazret Khawaja Moinuddin Hasan Chishty.

Salman Chishty said the values of understanding, love, cooperation and service towards humanity, especially among the youth, were on the wane.

“When people from all faiths and perspectives come and share diversity, it is one of the greatest strengths of our country. The new generation needs this wisdom to live by and make life out of that tradition, which is so sacred, and which is so intimate to being Indian,” he said.

Haji Syed Salman Chishty, the chairman of Chishty Foundation-Ajmer Sharif, speaks at a symposium in Calcutta on Friday.
Picture by Gautam Bose

The greatest challenge, of course, is when we see... those voices coming to the forefront just to spread hate. That is not the India we have always lived in and we were born and raised in
- Haji Syed Salman Chishty


Salman Chishty said India had always been accepting. “It is not about tolerating somebody but about wholehearted acceptance. That’s when we become complete in terms of sharing the traditions.”

Swami Suparnananda, the secretary of the Ramakrishna Mission Institute of Culture, spoke about loving everybody equally. “In order to love everybody equally, you have to ask for nothing from anybody,” he said.

Rajesh Jain of Janus Advisory Services said one must be more open-minded, no matter what one’s religion is. “Whatever religion you are following, there is no problem in following your own religion and believing in your own God. But when it comes to your external interaction, it has to be very open- minded and allow each person to have his or her viewpoint.… No religion teaches hatred.”

Educationist Paramjeet Kaur explained the significance of the four doors at the Golden Temple that lead to the sanctum sanctorum. “It means people from all four directions are welcome, people from all four castes that prevailed in India at that time… everybody was welcome,” she said.

The all-faith symposium was hosted by Chishty Foundation-Ajmer Sharif, in association with the city-based SREI Foundation.