With the management abandoning the eight gardens, Edwards sprinkled his own blood on the tea bushes of Happy Valley on Thursday afternoon 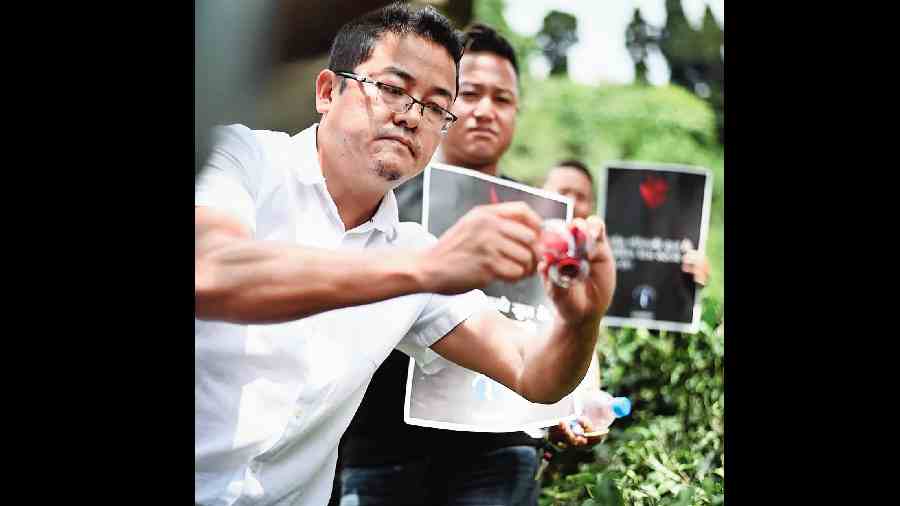 Managers and their assistants in eight gardens run by Darjeeling Organic Tea Estates Pvt Ltd (DOTEPL) have left the plantations without issuing lockout notices at a time when the annual bonus is to be paid to over 6,500 workers.

DOTEPL, which is owned by six European investors led by Artava AG of Switzerland, has been in financial stress for the past few years. Darjeeling district magistrate S. Ponnambalam said the managers had left the gardens without prior intimation.

“Officially, no lockout has been declared. We have been told that the managers of eight out of the 10 gardens (owned by the company) have left,” said Ponnambalam.

Usually, a notice announcing the suspension of work is put up when the management leaves the garden. Sources said the management officials of the eight gardens, including flagship Ambootia in Kurseong and Happy Valley in Darjeeling, had left on the intervening night of Wednesday and Thursday.

A senior district administrative official, however, said the company was “informally” sending out a message that the bonus would be disbursed by Saturday.“However, there is nothing in writing. Nevertheless, this message is being conveyed to trade unions,” said a source.

The sources said the management of Nagri and Mundakhoti, the two other estates owned by DOTEPL, had not left. “Workers are holding protests there. However, there is no major breach of law and order as of now,” said an administrative source.

The Darjeeling Tea industry had agreed to pay 20 per cent bonus to workers in two tranches — 15 per cent before Puja and 5 per cent just ahead of Diwali. With the management abandoning the eight gardens, Edwards sprinkled his own blood on the tea bushes of Happy Valley on Thursday afternoon. He went to the plantation, along with his supporters, drew blood using a syringe and sprinkled the same on the bushes from a tea cup.

“We had no option left but to intensify our 'blood tea' campaign given the unfolding situation,” said Edwards, who is also an elected member of the GTA Sabha.

GTA chief executive Anit Thapa, who is also the president of the Bharatiya Gorkha Prajatantrik Morcha (BGPM), appealed for peace and directed the party’s elected GTA Sabha members not to leave their bases in the next 48 hours.

The Telegraph has sent a mail to Rembert Biemond, the chairman of DOTEPL, for the company's stand regarding the abandonment of the eight gardens by the management. But no reply has come yet.