Man for all seasons in the long black coat 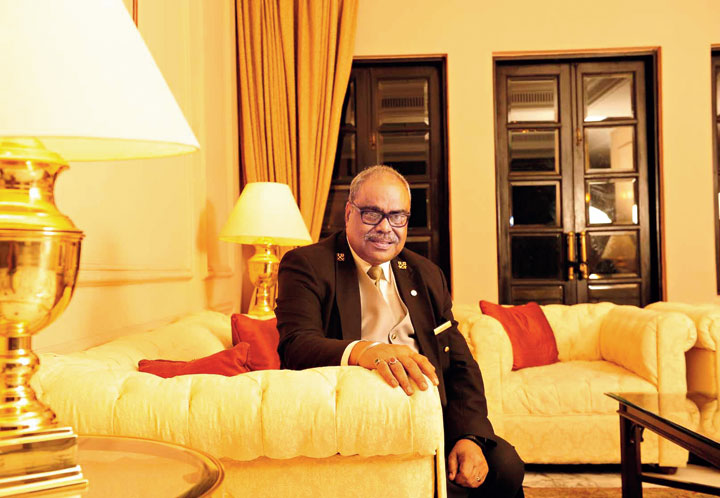 He is the tall man in the long black coat who greets you in warmly to Grand Hotel, one of the few grand places that remain in the city. His name is Amitava Sarkar.

A gregarious man with a booming voice, Sarkar, 60, “Sarkar-da” to everyone, is the hotel concierge. He is the man every can turn to. “A concierge’s job is to entertain every request of a guest,” he explains proudly.

Sarkar’s feats are well known in The Oberoi Grand, still lovingly called “Grand Hotel” by the city. There, in the lobby decorated with the giant flower bouquets and lit up by chandeliers, sits Sarkar under a sign bearing the legend “Concierge”.

The lobby has eight pillars. Sarkar is called its “ninth pillar”.

At this point, a comparison with Jeeves is inevitable. Both are tall, imposing gentlemen with impeccable manners and at the service of others — and both wear black coats.

Of course Jeeves, P.G. Wodehouse’s immortal valet, could do everything: from reading Spinoza, one of the great rationalists of the 17th century, to stealing 18th century silver cow-creamers for his employer Bertie Wooster to breaking every engagement that poor Bertie made with young women, because he, Jeeves, felt his employer could not benefit from such liaisons.

Sarkar is merely human. But his job profile, too, can include the impossible. “Juto shelai theke Chandi path,” says Sarkar, describing his work. The Bengali expression means “from repairing shoes to reading the book of slokas on the Goddess Chandi”.

He did organise shoe repair: a Lufthansa crew staying at the hotel, under his supervision, got their shoes repaired near New Market, each person paying about 2 Euros each when in Germany each would have spent at least 100 Euros, they had said.

Sarkar had helped a team from the international vehicles company Volvo to approach lawyers in the city.

But if Jeeves in his infinite wisdom could at times ignore the ordinary distinctions between right and wrong, Sarkar sticks to the strictly “legal”. Besides, unlike Jeeves, who despite his genius remained a valet, Sarkar is an official in the executive category at Grand.

Sarkar’s coat, in fact, is longer than Jeeves’s. Neither is it a throwback to the colonial times.

Sarkar was handpicked for the job by none other than P.R.S. (Biki) Oberoi, the man who heads the Oberoi chain and is a revered name, in 1997. Sarkar had worked for 15 years at the hotel. Oberoi started the service that year. “I was chosen for the way I look,” says Sarkar. And his personality and bearing.

A gregarious man who smiles easily and makes friends naturally, he always won the appreciation of guests. He had taken cricketer Gordon Greenidge on an interesting trip, among other things.

Seated at the restaurant Threesixtythree at the hotel, Sarkar recounts, again with great pride, his association with the hotel, an establishment he is very grateful to for having him. He is grateful to his mentors, among whom are Rajiv Malhotra and Amitabh Rai.

He points at the lapels of his coat, on each of which a small metal double-key is attached. “I am a member of Les Clefs d’Or, an elite international association of concierges,” he says. The double-key is a symbol of the association.

Sarkar attends its meetings in every corner of the world: Nice, Queenstown, Singapore, Seoul, Mendoza, London, Toronto, Tokyo. He is now personally known to stalwarts from the city and elsewhere.

An addabaaj (conversationalist) and a raconteur, he, however, is not self-conscious either about his Bengali accent or his carrying voice. He is resolutely himself.

Life was not so grand once.

Bruce Lee started it all. The year was 1982. Sarkar, in his early twenties, had obtained a degree in English Honours. He had studied at Dinabandhu Institution, Shibpur, Howrah. “But I had been unemployed for three years,” he says.

He also lived in Shibpur. His father was a British Airways employee, another man in uniform.

On that June day, Sarkar was just out of an early show of Enter the Dragon at New Empire, where he had watched the film from a space upstairs that came at the lowest price, 80 paise. Passing the hotel, he saw a crowd of well-dressed young men and women at the entrance.

An interview was being held for posts of receptionists at the hotel. He ran back to home to Shibpur, got a quick haircut to get rid of his early Eighties-style long hair (which went with wide “parallel” pants), and came back late afternoon to stand in the queue. He got the job.

He was posted at the front office for five years, when the visitors’ details were maintained according to the Whitney Rack system. Then he was made a part of the hotel’s airport service. The hotel had a station at the Dum Dum airport, so that guests could be welcomed from the moment they landed.

In these years, he made many friends in many places. Eventually, he was spotted for the concierge’s job.

His regular work includes organising trips for the guests or helping them with the purchase of gifts. But some of his deeds as concierge are part of the hotel lore.

A few years ago, a guest from Chicago, just after checking in, had heard that her mother had passed away. She had to go back immediately. Air tickets were looking impossible.

Sarkar activated his huge network, and within a few hours, got her Calcutta-to-Doha and Doha-to-Calcutta tickets. He says she has written to him saying she is also coming back to meet him.

In another well-known episode, Sarkar helped a 70-plus guest from abroad who was travelling with her nonagenarian mother. The septuagenarian fell extremely ill from food poisoning and had to be admitted to a hospital. The mother had to leave.

Sarkar swung into action and got in touch with the husband of the guest who was ill. The guest’s husband was not getting a visa from the US. Sarkar got in touch with consulate staff, organising the right papers, and got the anxious man to the city in no time at all.

Sarkar’s services are not restricted to the hotel premises. He had helped two women from Seoul, who had been robbed of all their belongings to a taxi driver, to get back all they had lost. The taxi driver was caught.

But what he recounts with the greatest enthusiasm is his encounter with Greenidge.

The famous West Indian batsman, a guest at the hotel long before Sarkar became a concierge, had promised Sarkar a set of clubhouse tickets for the next Test match in Calcutta. It fell to Sarkar to see Greenidge off at the airport.

They were travelling in a regular taxi. At Ultadanga, Greenidge spotted daab (green coconut) being sold and before Sarkar could stop him, got down and was helping himself to some. But cricket-crazy Calcuttans had already begun to gather.

Sarkar came to the rescue. “He is not Greenidge,” he shouted in Bengali. “He is just someone who looks like Greenidge,” he said, and packed the cricketer into the taxi and drove off.

“I got my tickets,” he says. “The joy of it! And my status at the parar (neighbourhood) tea stall in Shibpur! How it shot up!”

He lives near the airport now and comes to his workplace taking first an auto, then the Metro.

Sarkar is actually 5 feet 10 inches, but in his grand coat, he seems much taller.

Grand Hotel, where the romance and grace of the old world remain preserved, yet the new does not feel unwelcome, is one of the last places in the city that are larger than life. In his long coat, Sarkar fits into the scheme of things perfectly.