Mamata discusses BSF jurisdiction, Tripura violence and Covid vaccine with PM, says she did not seek appointment with Sonia Gandhi 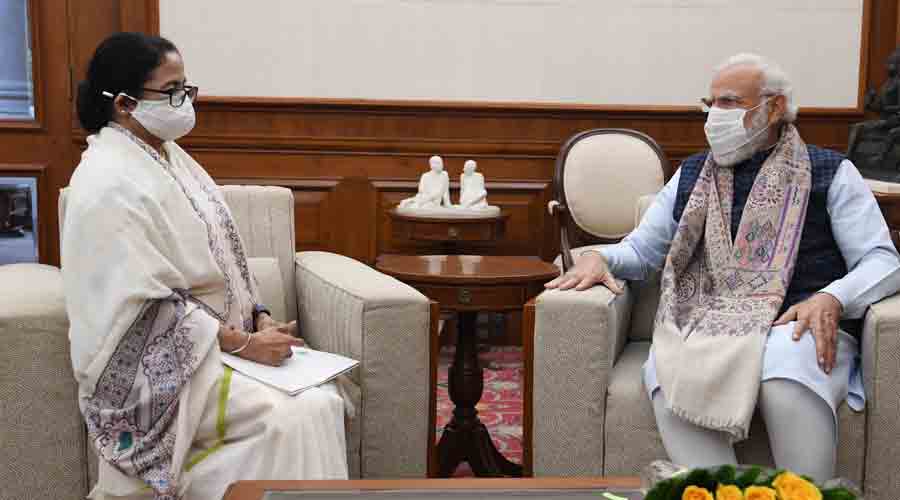 Prime Minister Narendra Modi may well inaugurate the next Bengal Global Summit to be held in Calcutta on April 20-21 should he decide to honour an invitation extended by chief minister Mamata Banerjee during her meeting with him in the national capital on Wednesday.

“The industry is in a poor condition because of Covid. I have requested the Prime Minister to inaugurate BGS. Our political differences will remain, but that should not impact Centre-state ties,” Mamata said after her meeting with Modi at South Block. “Given the Covid situation, we are not sure how many countries will participate but if the Centre and state work together then it will send a strong message and show the right direction to the industry,” she added, indicating that the Prime Minister had accepted her invitation.

Mamata is also understood to have raised the issue of the BSF's territorial jurisdiction in the state, demanding that it be withdrawn. The Bengal chief minister also discussed the contentious issue of granting more powers to the BSF, Covid vaccine and problems faced by the jute industry.  She also spoke to the Prime Minister about violence in Tripura in which TMC workers were allegedly assaulted by BJP workers.

On the upcoming Uttar Pradesh polls, she said, "If Akhilesh (Samajwadi Party chief Akhilesh Yadav) needs our help, then we are ready to extend help." During this visit to the national capital, Mamata has acquired "assets" for states like Bihar, Jharkhand and Haryana as three leaders, Pavan Varma, Kirti Azaad and Ashok Tanwar joined the Trinamul on Tuesday.

Ahead of her meeting with Modi, BJP MP Subramanyan Swamy met Mamata that fuelled speculation that he too was on his way out. Since joining the BJP Swamy has been eyeing the finance ministry berth but was kept out of the cabinet by Modi in both the terms. “What is the harm if Swamy met me? Relationships are above politics,” she said.

The Bengal chief minister claimed she had not sought any appointments with the Congress working president Sonia Gandhi as she was busy with the polls in Punjab. The fact is that the slew of defections the Trinamul has engineered from the Congress state units across the country would have cast its shadow on any meeting between the two leaders.

While Punjab will go to polls next year along with Uttar Pradesh, the Election Commission is yet to announce the dates for the polls. With Charanjit Singh Channi appointed as chief minister, there is little immediate fire-fighting to be done for the Congress in the state, where former chief minister Amarinder Singh is ready to align with the BJP.

Mamata said she will be going to Mumbai on November 30, where she will meet NCP chief Sharad Pawar and Maharashtra chief minister Uddhav Thackeray. Both NCP and the Shiv Sena are in alliance with the Congress running the Mahavikas Agadhi government.

“We are within our rights to set up units in any state. During the UP elections I will visit if the party decides,” she said. “We will not contest in every election. We will contest only when it is necessary. Elsewhere, we will extend support.”

In  Uttar Pradesh, the late chief minister, Kamalapati Tripathi’s grandson and great-grandson have joined the Trinamul. Mamata said she had plans to visit Varanasi, also Modi’s constituency, though the purpose was religious.

Taking a dig at Mamata’s meeting with Modi, Congress leader in the Lok Sabha and Bengal unit president Adhir Ranjan Chowdhury said, “The PM will give her tips on how to further weaken the Congress.”