Mamata on board to welcome Nobel winner home 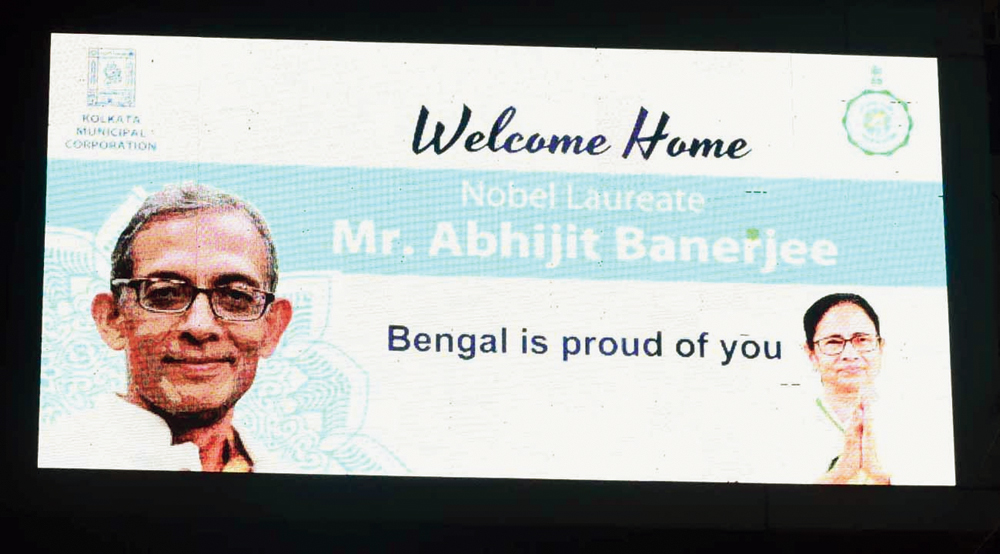 Billboards and banners welcoming Nobel winner Abhijit Vinayak Banerjee to the city have been put up after the Calcutta Municipal Corporation made amendments to its original plan and included the picture of chief minister Mamata Banerjee in the design.

As was initially planned, LED display boards of the CMC had begun running messages welcoming Banerjee to the city since Saturday. The design included a picture of Abhijit, but Mamata had been left out.

Welcome banners having the same design were scheduled to go for print on Saturday but it was withheld at the last minute.

A change in plan was initiated and a picture of Mamata alongside Abhijit was broached to be included in the design.

Two designs were presented to the authorities for approval. One had Mamata’s picture covering equal space as Abhijit’s and the other had the chief minister’s picture but a tad smaller than the Nobel winner’s. 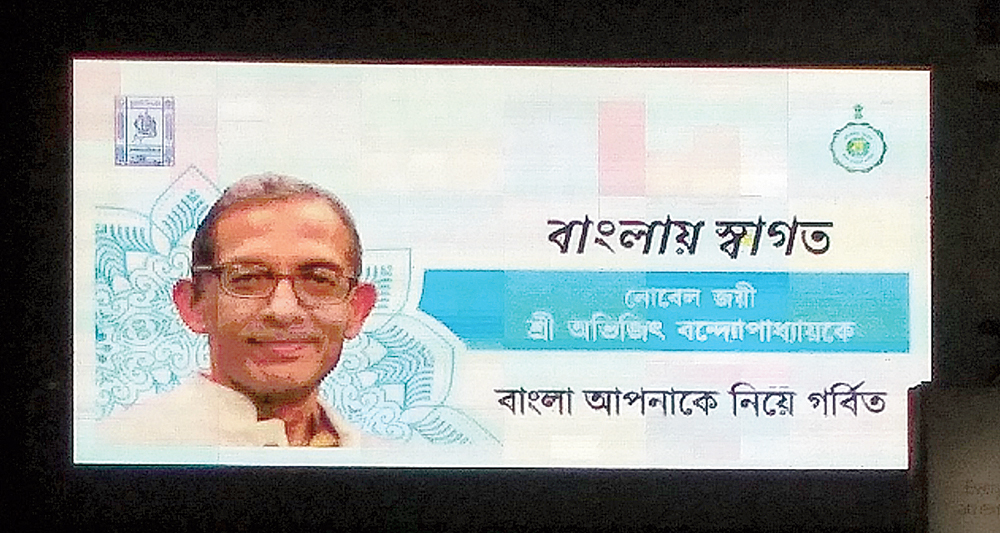 One of the old billboards
Picture by Bishwarup Dutta

The civic authorities were pressed for time on Monday afternoon, when the final approval came. By Tuesday afternoon, the city has to be covered with the billboards welcoming Abhijit.

“The plan is to put up 100 temporary billboards on the route from the airport to Abhijit Vinayak Banerjee’s Ballygunge Circular Road home. We will put up the billboards from Ultadanga,” said a CMC official.

The Calcutta Metropolitan Development Authority (CMDA) will put up billboards on VIP Road, the official said. The temporary billboards will be similar to the advertisements put up during Puja, where banners are put on bamboo frames.

Besides the temporary hoardings, the CMC and the CMDA will put up the banners on permanent billboards. Those are the ones that stand on poles along roads as well as on the top of buildings.

Several billboards have advertisements whose tenure is yet to end and they cannot be brought down abruptly. “We have very little time in hand. We will start putting up the banners from around midnight on Monday and finish the work by Tuesday afternoon,” said an official.