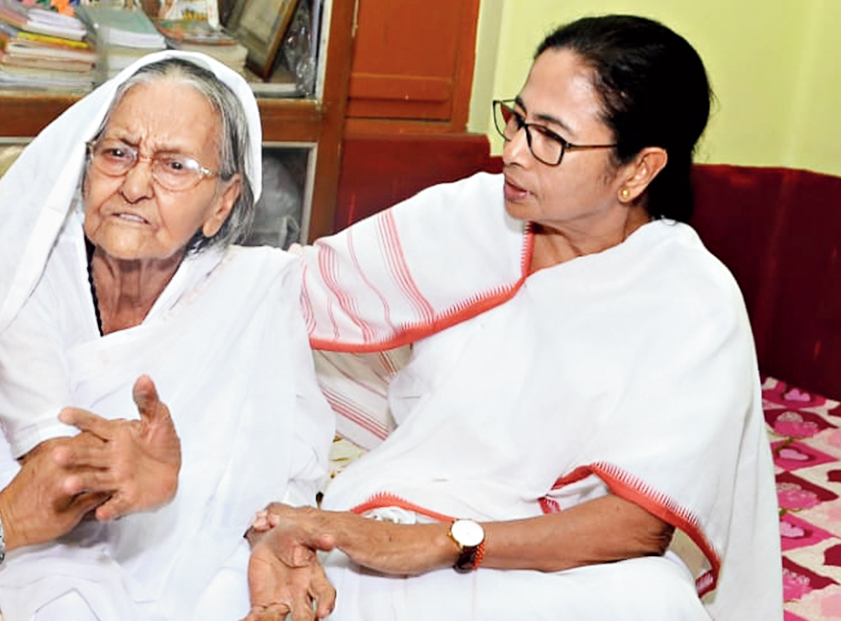 Mamata Banerjee on Thursday went all-out to ensure her party retains the support of the influential Matuas, who the BJP is assiduously trying to woo, using a celebratory dais to roll out a list of sops for the Hindu Namashudra community and attacking the saffron camp over the emotive citizenship issue.

The chief minister visited the Matua Mahasangha headquarters at Thakurnagar in North 24-Parganas for the first time since the campaign for the 2014 Lok Sabha polls.

The event at Thakurnagar was held to launch yearlong celebrations of the birth centenary of Binapani Devi, the Matua matriarch. Mamata conferred on Binapani Devi Bengal’s highest civilian award, the Banga Vibhushan.

At the event, Mamata brought up the BJP’s alleged politics over citizenship, an emotive issue for the Matuas who comprise mainly downtrodden Hindu Namasudras who crossed over to India as refugees after the Partition.

“Dirty politics is at play in the name of the NRC (National Register for Citizens). Lakhs

of genuine citizens are being discarded. We will never support this,” the Trinamul chief said.

According to Trinamul estimates, the Matuas play a decisive role in 10 Lok Sabha seats in Bengal.

“You are Indian citizens and that is your identity, which cannot be taken away from you. Those trying to snatch it are doing a great wrong,” Mamata said, referring to a Matua delegation from Assam. The Mahasangha says that out of more than 40 lakh names excluded from the NRC draft in Assam, at least 12 lakh are Matuas.