The Bengal CM proposed a front to rid the country of the despair created by the Narendra Modi government, seeking to inject a sense of urgency 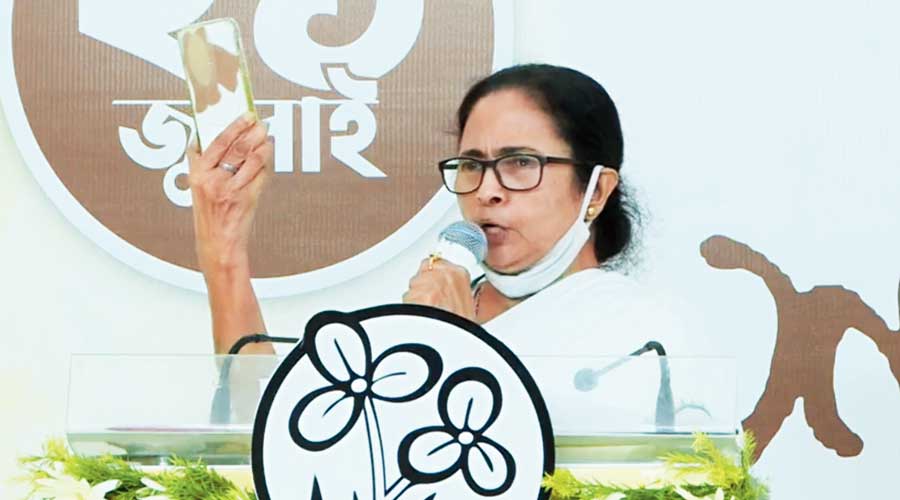 Mamata Banerjee holds up her phone and, addressing the leaders of other Opposition parties listening to her from Delhi, says she has taped over the cameras of her phone because of the possibility of being targeted with spyware. She said the Modi government needs to be “plastered up” in a similar manner to prevent the destruction of the country
Devadeep Purohit   |   Calcutta   |   Published 22.07.21, 03:07 AM

Mamata Banerjee on Wednesday underscored the need for unity of Opposition parties across India and proposed a front to rid the country of the despair created by the Narendra Modi government, seeking to inject a sense of urgency and cautioning against a replay of the costly complacency of 2019.

“There is despair, instability, violence and confusion across the country…. We want to bring in a new ray of hope,” said the Bengal chief minister, pitching for a “pro-people government” in Delhi after the 2024 Lok Sabha elections.

“I don’t know what will happen in 2024, but our work should start now,” she added, stressing that less than three years were left for the big battle.

“If the doctor comes after death, then there is nothing that can be done. If treatment can be offered after diagnosis of the ailment, something can be done…. So, we cannot waste any time. If you can organise a meeting next week, on July 27 or 28, I can attend,” Mamata said.

The chief minister was delivering virtually Trinamul’s July 21 Martyrs’ Day address that was beamed live across multiple locations in the country.

Representatives from the Congress, Samajwadi Party, RJD, Shiromani Akali Dal, Shiv Sena, NCP, Aam Aadmi Party, DMK and the TRS attended the event online from Delhi. Sharad Pawar of the NCP and P. Chidambaram and Digvijaya Singh of the Congress were among those who reached the Constitution Club in the capital to participate in the event.

“I want to tell all the leaders to go back and talk to their parties and plan on how to unite. I want to repeat, form a front,” Mamata said.

Aware that the biggest challenge for any such front would be selecting the face of the alliance, Mamata said that her role would be limited to that of a worker and she would follow the instructions of others.

“Forget self-interest. Save the country, save the states and the federal structure,” Mamata said in her address delivered in Bengali, Hindi and English, keeping in mind the audience from several parts of the country.

The call for the front brought back memories of a similar idea she had floated from the Brigade Parade Grounds in January 2019 — a few months ahead of the general election in which Modi routed his rivals. But the content of Mamata’s speech on Wednesday made it clear that she did learn her lesson from the failed experiment she had tried two-and-a-half years ago.

Unlike the 2019 attempt, when she got leaders of 23 national parties on a platform in Calcutta barely four months ahead of the polls, Mamata made it clear this time that a concerted and planned approach is indispensable.

Mamata sought to debunk  the perceived invincibility of Modi and Amit Shah and gave a new twist to her signature poll slogan “khela hobe”.

“One game has happened in the state and another game is afoot…. Khela will happen in all states until the BJP is removed from the country,” Mamata said, before declaring August 16 as “Khela Hobe Divas” in Bengal.

Unlike other July 21 programmes — the most important event in Trinamul’s annual roster— Mamata hardly spoke about the political scenario in Bengal.

The theme of Mamata’s 48-minute address was national politics and she took care to explain the BJP’s follies and the need for a consensus among the Opposition parties to take on the saffron camp in the next general election, scheduled in May 2024, to save the country.

Sources close to the chief minister said that several senior Opposition leaders like Pawar and Sonia Gandhi had been prodding her since the outcome of the Bengal elections to play a role in bringing together the non-BJP parties so that a united fight can be put up in the 2024 Lok Sabha polls.

“While Didi and the other leaders behind the initiative are aware of the enormity of the task, they are convinced that the time is right as the mood of the country seems to be changing because of the Modi government’s mishandling of the pandemic,” a source said.

In her address, Mamata not only held the Modi government responsible for the death of over 4 lakh people across the country because of Covid-19 but also highlighted the Centre’s failure in making vaccines and oxygen available on time for people.

“Your failure in handling Covid-19 has been monumental…. Instead of planning on how to tackle the second wave, you had become a daily passenger to Bengal during the (Assembly) elections. What did you get?” Mamata asked, hurling a direct question at Modi before urging him not to lecture the country any more with his “Maan ki Baat”.

She criticised the Prime Minister for his recent praise of Uttar Pradesh chief minister Yogi Adityanath for his handling of the Covid situation in the state.

Didi to Delhi guests: I will be with you as a worker