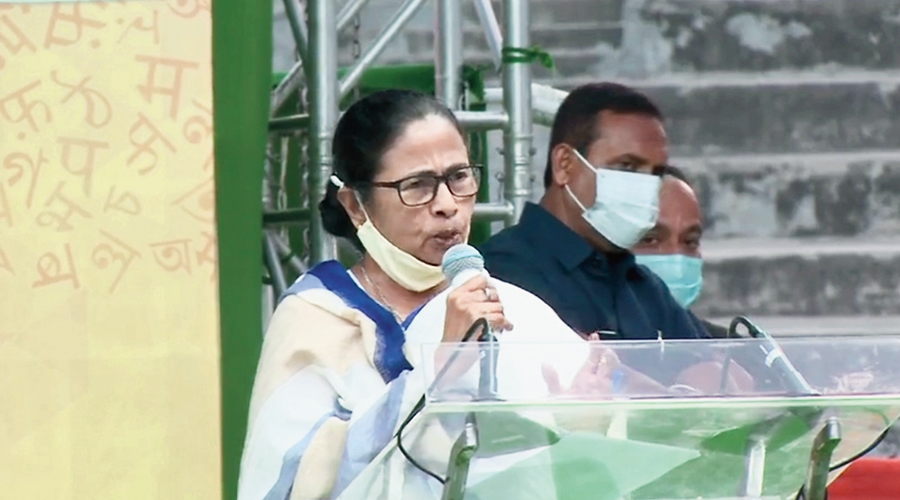 Mamata Banerjee on Thursday urged the Bengal electorate to heed the advice of one former CPM chief minister and borrowed from the lexicon of another, accusing the BJP of finishing Sonar Bharotborsho (Golden India) and mocked it for promising Sonar Bangla (Golden Bengal).

Speaking at a Trinamul Congress event in the city on Thursday evening, she first appealed to the people to learn the lesson CPM’s former Tripura chief minister Manik Sarkar was trying to teach here on Tuesday. Then, Mamata converted former Bengal chief minister Buddhadeb Bhattacharjee’s 2001 campaign slogan into her own.

The line was virtually an echo of Bhattacharjee’s clarion call from exactly two decades ago — while he was trying to ward off then his challenger-in-chief, Mamata — that the only alternative to the Left Front was an improved Left Front.

Shortly before that, Mamata had brought up “Manikbabu”.

“How well do you know the BJP? Tripura’s former chief minister, Manikbabu, he has said here… that go, see for yourselves in Tripura, what they have reduced the people to. Down to the last rickshaw-puller, a cart-puller… government employees, teachers… none has been spared,” said the Trinamul chief, who had alluded to Sarkar’s counsel, but not with such stress.

Mamata seems to have latched on to Sarkar’s message, especially with an eye on Left voters swinging away towards the BJP, which had purportedly handed the saffron camp 18 seats in the Lok Sabha polls in Bengal in 2019.

At a Burdwan rally on Tuesday, Sarkar, a CPM politburo member, had cautioned against bringing the BJP to power in Bengal.

“Take a train and visit Tripura.… you talk to common people like rickshaw pullers, grocers… to know the reality. They will surely tell you what a blunder they committed by voting for the BJP,” said Sarkar.

On Thursday, Mamata advised the BJP to first see their own faces in the mirror.

“Charity begins at home. What is happening in your Gujarat, your Uttar Pradesh, your Madhya Pradesh, your Bihar… from Tripura to Assam?” she asked.

“Just go and ask Bengalis in Tripura today, my dear sisters and brothers. Most of them common people, who used to shout slogans once that ‘CPM ashiya, Tripura dilo bhashaiya (The CPM came and sent Tripura floating)”. Those same people, today they say: ‘BJP ashiya, Tripura dilo bhashaiya (The BJP came and sent Tripura floating),” she added. “Go (to Tripura) once, you will see for yourself. So many have run away and have come to live here now.”

On March 3, 2018, the evening of the Tripura Assembly polls results, a visibly displeased Mamata had blamed the Tripura results on the Left’s “avoidable and abject surrender” and the Congress’s failure to accept her offer of a seat adjustment.

On Thursday, she said: “Even now, I feel so sad. Defections from the Congress made the BJP strong there (in Tripura), brought it to power. The BJP thinks it can use the same formula here, with some traitors from Trinamul…. Shameless.”

Mamata then went on to mock the BJP over its Bengal campaign promise.

“Sonar Bangla? Is it that easy, BJP-babus? Do you even know what real gold is?” she asked.

“Big lectures? Sonar Bangla? They finished my Sonar Bharotborsho…. Street-fights, in every corner of the nation. Farmers don’t get justice, workers don’t either. Mothers and sisters are dishonoured. Journalists get beaten up. I feel shame for what they do,” she added.