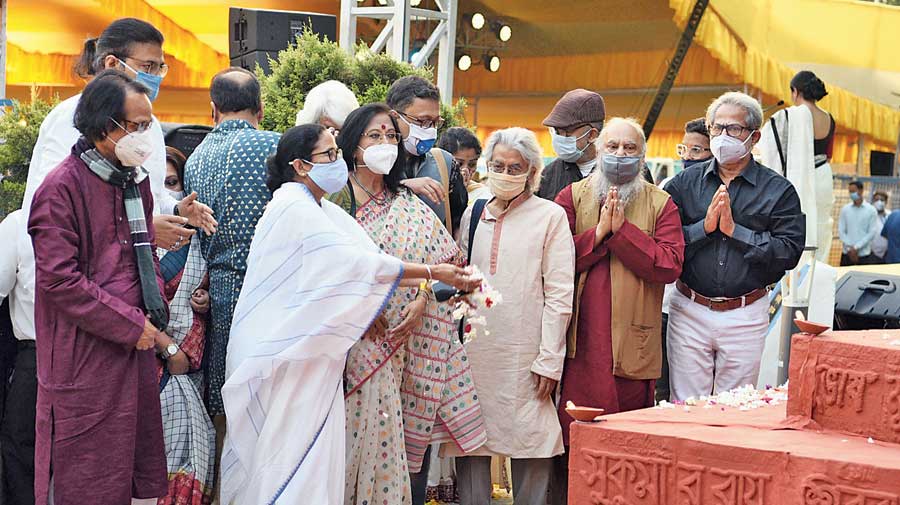 Mamata Banerjee on Sunday accused the BJP-led Centre of step-motherly treatment towards Bengal, raising questions on the delay in renaming the state and accusing it of deprioritising regional languages such as Bengali.

The chief minister, at an event to commemorate the International Mother Language Day, said the Bengal government had approved the change of the state’s name formally to Bangla four years ago, but the Centre had not yet done so.

“They (the Centre) came up with this strange reasoning that the name (Bangla) would leave scope for confusion with a neighbouring nation. But that’s another nation. If there can be another Punjab in another nation, why can’t there be a Bangla here? Four years, they kept it hanging…. Some will say Bangal, others will say Bongal, why? Why won’t even the name be pronounced correctly?” asked Mamata.

The proposal to rechristen the state had been endorsed by all non-BJP parties in the Assembly, in a relatively rare instance of an issue uniting Mamata, the Left and Congress.

There have been multiple renaming efforts since 2011, involving several suggestions, to culminate in the Assembly resolution in July 2018 to change the name to Bangla.

In the run-up to the crucial Assembly polls this year, Mamata has been repeatedly trying to corner the BJP, which she accuses of being the bohiragawto (outsider), trying to invade and destroy the state and what its people hold dear.

On Sunday, she went on to say she has noticed a historical tendency towards a step-motherly treatment towards Bengal.

“An attempt to deprive Bengal. A stepmotherly behaviour towards it. Whenever someone from Bengal rises, (there are) attempts to drag them down, pull them back. From Netaji Subhas Chandra Bose to Syama Prasad Mookerjee, Ramakrishna Paramhansa to Rabindranath Tagore, none spared,” said the chief minister, carefully adding the saffron camp’s mega icon Mookerjee too to the mix.

“Why should this happen at all, and why should it go on?” she asked. “Bengal must always mean the worst? This perception that they try to peddle is very bad…. The people of Bengal, I know, will stand up to this aggression.”

Though vehemently critical of the Trinamul chief’s alleged attempts to polarise voters on the basis of regionalist sub-nationalism, the saffron ecosystem seems unsure of how the outsider label will impact the BJP electorally. Its top leaders Narendra Modi, Amit Shah, J.P. Nadda are trying to convince the people of the state that their party does not lack a Bengal connect and does not exclusively represent the Sangh parivar’s Hindi-Hindu-Hindustan vision now.

Mamata and her party have, so far, been enjoying an apparent edge in this fierce rivalry, as the BJP has often been found wanting, with avoidable gaffes in their gestures or statements that have suggested a relative lack of understanding in several core areas of the complex Bengal ethos.