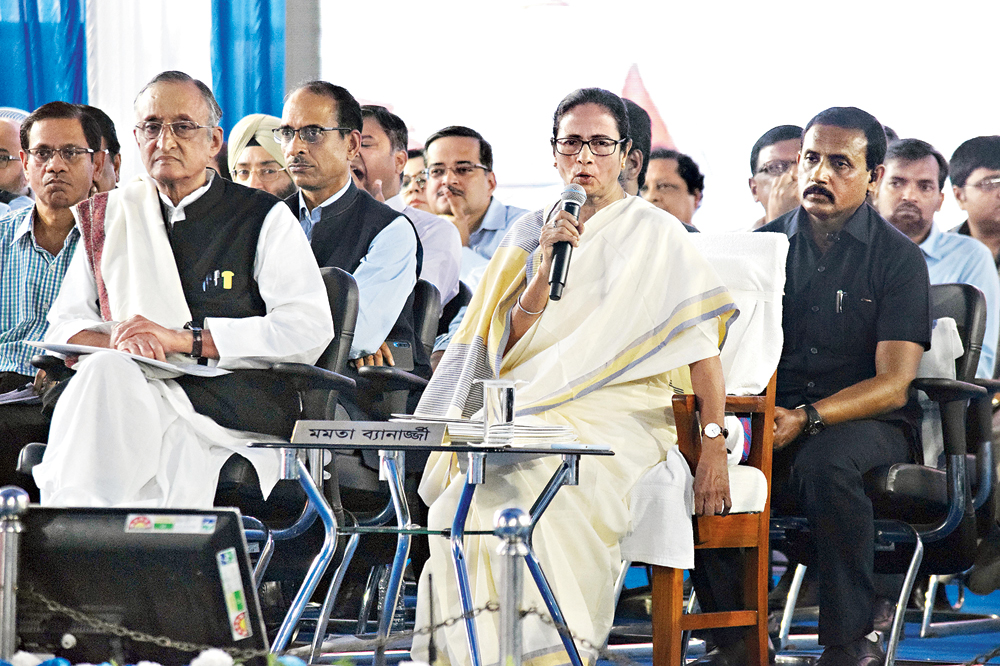 Chief minister Mamata Banerjee said on Tuesday that no Assam-like detention camps would be set up in Bengal, following up on her repeated pledges that a National Register of Citizens (NRC) would not be implemented in Bengal.

“There will be no Assam-like detention camps in Bengal because there is going to be no NRC in this state. The state government has to implement a policy. In Assam, there is a BJP government but we are here…. So, I am telling you please get this citizenship thing out of your head,” Mamata said at an administrative review meeting in Siliguri, elaborating on assurances against the NRC that she had offered at a public meeting here on Monday.

At the administrative review meeting — her first during the current north Bengal trip — attended by elected representatives and officials of the Alipurduar, Cooch Behar and Jalpaiguri districts, the chief minister tried her best to allay fears about the NRC.

Mamata also repeated her opposition to the Citizenship Amendment Bill through which the Narendra Modi government is seeking to facilitate the grant of Indian citizenship to non-Muslim immigrants from Pakistan, Bangladesh and Afghanistan.

Trinamul is opposed to the bill on the ground that it makes religion the main criterion for citizenship. BJP president and Union home minister Amit Shah has said the bill will be passed before implementing the NRC.

The citizenship issue has occupied centre stage in the political discourse in large parts of north Bengal amid fears the Modi government will try to push measures to identify illegal Bangladeshi immigrants. The scare has been fuelled by neighbouring Assam building detention camps for those who have failed to make it to the NRC there.

Sources close to Mamata said the theme of her north Bengal visit was to recover the ground Trinamul lost to the BJP in the region — it lost seven of the region’s eight Lok Sabha seats in the summer elections — by harping on the NRC issue and dispelling the fears among the people.

The chief minister prodded the administration to ensure people could include their names in electoral rolls, get ration cards and update their details without any hassles.

“There are some officials who take pleasure in striking off names from lists…. I am telling you categorically that I will take action in case officers are found harassing people when they come for inclusion in the voters’ list or update ration cards,” Mamata said.

The chief minister announced that camps would be set up across Bengal between November 5 and 30 so that people can get ration cards or update their details.

She urged the authorities in the districts to run media campaigns to inform people about the dates. During the meeting, she repeatedly mentioned that any of the 14 identity documents would be enough for inclusion in the voters’ list.

Having given the assurance that the administration would walk the extra mile to ensure basic identity documents for the citizens, Mamata clarified that the process had nothing to do with the NRC. “These, however, don’t have any links with the NRC,” Mamata said.The BJP pooh-poohed Mamata’s statements.

“She doesn’t have the authority to give such assurances as the decision on the NRC will be taken by the central government…. Besides, the Centre will, in all likelihood, bring the Citizenship Amendment Bill in the winter session of Parliament and get it passed,” BJP national secretary Rahul Sinha said.