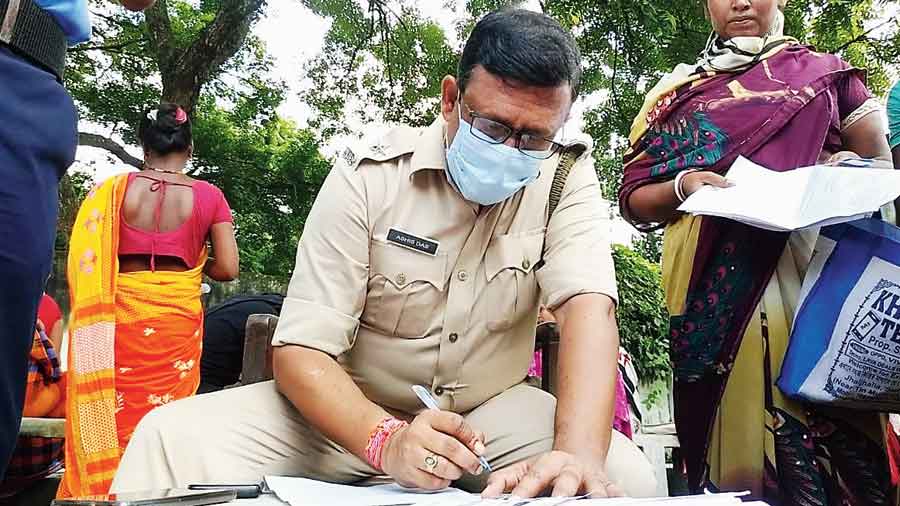 At the camps, police personnel also arranged chairs and tables, set up assistance counters. “We just wanted to help,” said Ashis Das, the inspector–in–charge of Englishbazar police station, who sat under the scorching sun to fill up 150 application forms at a camp in Kotwali on the outskirts of Malda town.

“They are educated people and made no mistake in filling up the forms. This apart, their very presence at the camp ensured discipline. Everybody stood properly in the queue, waiting for her turn,” said Rakhi Choudhury, a domestic help.

The initiative, police sources said, was also taken to prevent unscrupulous people from charging money in exchange for filling up the forms at the camps. In north Bengal, a number of such cases and even arrests have been reported last week.

“We have heard about such people who charge money. But today (Wednesday), it was altogether a different experience. We did not face any inconvenience in submitting our applications because the police officers were there to help us,” Kiran Mondal, a homemaker, said.

Police also distributed masks and clothes among the poor and held friendly volleyball matches in association with local clubs. “Such initiatives help strengthen the relationship between the police and people,” said Malda SP Alok Rajoria. “We will take up similar activities in future too.”