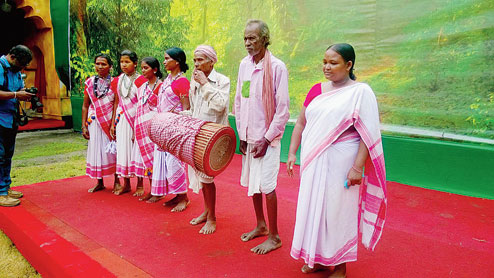 (The land has been orphaned O King Mahesha/ The world weeps for you/ Land after land moans for you...)

While Navami arati was on in the FE Block community hall ground floor, soulful strains were being heard upstairs. The Asurs were on song, mourning the killing of their ancestor Mahishasur.

The seven members of the Asur tribe were the star attractions at the FE Block pandal where the theme centred around the little-known descendants of the buffalo demon of the mainstream myth. In subaltern Asur lore, their valiant king was murdered by a beautiful wily woman.

The visit was the result of much debate and deliberation as the tribe traditionally stays away from Durga puja celebrations, spending the period in mourning the death of their king. In fact, despite a visit to their village Sekhuapani from Netarhat in Jharkhand by the puja committee members months ago and multiple subsequent telephone conversations, they did not take the train for which tickets had been sent. It took another round of convincing by the puja committee for them to take a bus later. “It was a 12-hour ride from Ranchi to Babughat,” says Sushma Asur, the leader of the group, who clears the air at the very start of the conversation: “We do not have any truck with Durga puja. We are here to put up our cultural programme.”

Had they not come to Calcutta, they would have been busy tending to their hilly fields and rearing their goats. “Alu nikal gaya (The potatoes are ready for harvest),” says Sukhmania Asur. Ironically, they would still be nudged into awareness about impending Durga puja by the chanda seekers. The nearest Durga pujas are about 40km away, in Banari and Chhatakpur. Why would they have to pay subscription when they are opposed to the ritual? “‘Daan rup se de do,’ they tell us,” Sukhmania shakes her head.

Till the late 80s, the Asurs spoke only in their own language. “We went to the neighbourhood haat, we made purchases by only pointing to the products we needed,” Sushma says. In 1988, a school was started in the area with teachers from outside the community. “Frocks were given to us as uniforms. Till then, frocks were forbidden. We wore small saris and petticoats. My father, the sarpanch head, decided that school was important so frocks were allowed. Villagers sold maize and mustard seeds to buy frocks for their daughters.” Even the merchants from whom the Asurs bought clothes started bringing frocks to the village.

Sushma was not even five then and was called Maghi. “My friends were called Kanam, Gaani, Sumaari…But the teacher gave us new names. I became Sushma and my age was increased to let me attend classes.”

She recalls the first lesson. “The teacher taught us to greet her by saying  ‘Pronam Sikshikaji’.” But by the next morning, despite fervent attempts at memorising, all the students had forgotten their first Hindi words. “On the way to school, one of us yelled: ‘Didn’t it sound like jijaji?’ We all walked murmuring the term lest we forget it again. In class, when we greeted the teacher with ‘Pronam jijaji’, she smiled and we thought she was happy with us. It was only later that she told us that we had addressed her as bhatu (brother-in-law in Asur tongue). We were so embarrassed!” laughs Sushma, who studied till Class VI and now speaks several local languages like Sadri Nagpuri, other than Hindi.

The village, at an altitude higher than Netarhat, has electricity but in Sushma’s words “Bijli kabhi bhi so jati hai”. She has a cellphone but to access any documents emailed to her she has to go to a nearby town. There is no television in the village. Signs of poverty are obvious.

Ancient artisans
The tribe, which takes pride in being among the earliest practitioners of iron smelting, traces its problems back to the time when the Asurs were barred from cutting trees from the forests. “Our ancestors could make coal by burning sal trees. That coal is best for smelting iron,” says Sukhmani.

The new generation, which lacks expertise in the process, is bitter about being denied access to natural resources. “The urban folk learnt the iron smelting process from our ancestors and built factories where no Asurs were employed. We were forced to start working in the fields and as labourers,” Sukhmania says.

Young Asurs have learnt to live with Dussehra celebrations. While their ancestors would keep themselves away from it all, the Asurs who are studying or working in cities like Ranchi, would go to a Dussehra site not to take part in the festivities but to check out the fair.

At the Salt Lake puja, Sushma’s distant aunt Sukhani found solace in the idol of the demon king. “At the Dussehra events in Jharkhand, they make the Asur look ghastly — eyes popping out of the socket as the trident pierces his chest. Here he looks dignified and is still fighting,” says Sukhani.

Over the four days of their stay, the Asurs put up cultural performances, the women dancing and singing as the elderly men — Chuhi and Bhikha Asur — played a dhol. The two younger girls — Sukhmani and Dudhmania — were taken shopping by the organisers to Hatibagan market. The block residents also collected old clothes to send back to the village with them.