Not just Santipur and Phulia, modernised power looms have been set up in Nabadwip, Banipur, Ashoknagar and East Burdwan 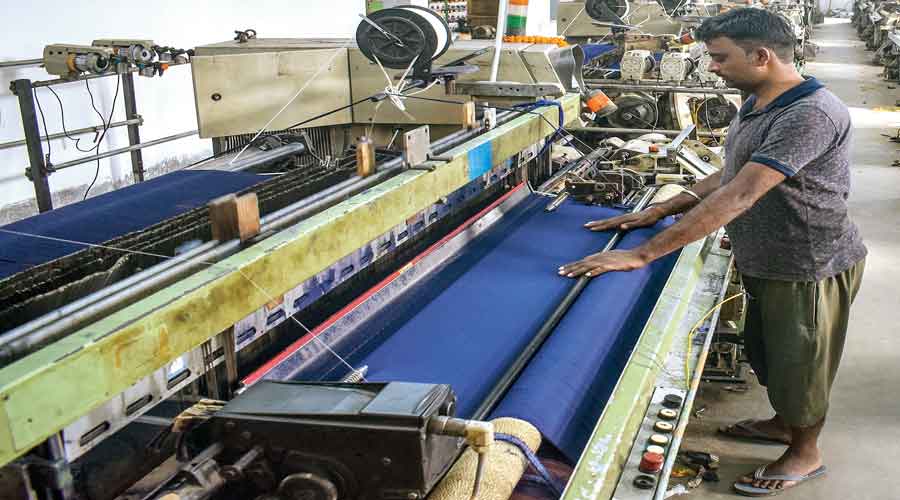 The Bengal government is offering them logistics support in setting up modernised power looms to manufacture textiles for school uniforms.

A number of such power looms owners in Santipur have come forward to convert their set-ups into modernised power looms and started manufacturing suiting and shirting lengths from this month. The cloth manufactured at these power looms would be procured by state government undertaking “Tantuja” for making school uniforms by members of self-help groups.

The state is supplying yarn, an official of the textiles department said.

Not just Santipur and Phulia, similar modernised power looms have been set up in Nabadwip, Banipur, Ashoknagar and East Burdwan. The government expects these looms to collectively manufacture 50 lakh metres of cloth by January next year that will go into making school uniforms.

The state government at present requires a six crore metres of suiting and shirting lengths to supply two sets of uniforms to students across the state.

As of now, the cloth is procured from outside Bengal.  But if the state government’s project succeeds, by 2024 Bengal will become self-reliant, a Nadia district official said.

“We have begun to change the picture. For the first time, we will procure locally made suiting lengths of 50 lakh metres from  Santipur, Phulia and some other places. The chief minister has given us three years’ time to reduce dependence on outside procurement. So, we have planned to set up at least 100 industrial hubs where such modernised power looms would be set up for manufacturing suiting and shirting lengths,” state small-scale and medium enterprises and textiles minister Chandranath Sinha told The Telegraph.

The endeavour conceptualised by chief minister Mamata Banerjee aims to do away with dependence on Gujarat and Maharashtra from where suiting and shirting lengths are bought to make school uniforms in Bengal.

The state government has taken up Nadia as its pilot project. Officials said the aim is not just to curtail the cost of uniforms, but also explore job opportunities in Bengal.

“Our primary target is to develop infrastructure so that we could gradually become self-reliant. Not just school uniforms, we are trying to build infrastructure and support entrepreneurs so that we can independently make uniforms for the police, firefighters, healthcare personnel and others,” minister Sinha added. “We have received several applications from power loom owners who want to convert their set-ups.”

To begin with, most power loom owners have installed second-hand machines bought from Mumbai, each of which cost around Rs 12 lakh.

“But we are planning to procure new machines that cost Rs 45 lakh. The state government has assured us of arranging bank loans for it," Debranjan Das, a power loom owner in Santipur Bagdebipur, said.

He added that in August they were asked by textiles officials if they were interested in converting their set-ups for this new job. “I found the offer challenging,” Das said.

“The state government has also given me with yarn. By September I installed two machines and hired technicians from Mumbai. I submitted a sample of suiting length manufactured at my unit to the textile officials. It was accepted and since then production has started,” he added.

Another entrepreneur added that the sari business had suffered during the pandemic and this new venture has given them hope of steady earnings. “I expect to earn twice what I did in the pre-Covid time,” he said.

Gloom in the loom