There will be a meeting at Rani Rasmoni Avenue and from there, they will go to the governor's residence to submit their deputation 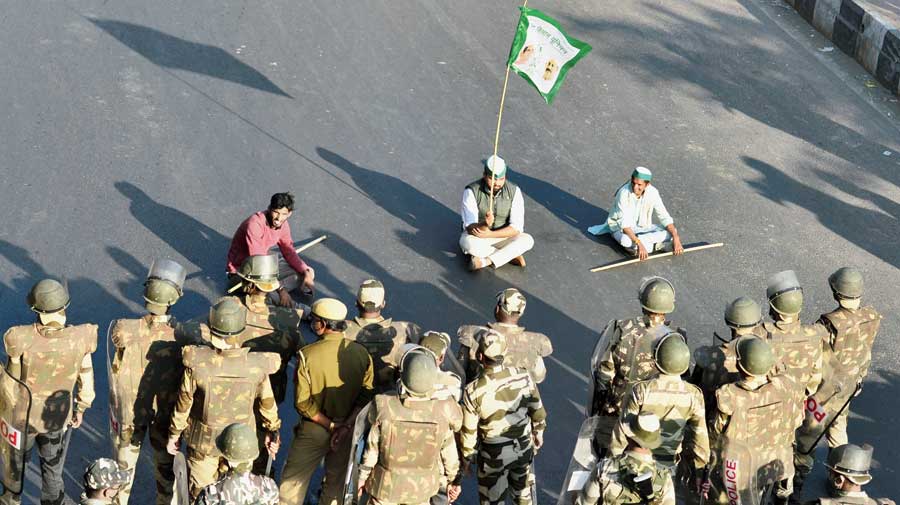 “We have planned a series of programmes throughout December, including a march to the governor’s residence, to protest against the laws and state-sponsored atrocities against the farmers in Delhi,” said Amal Halder, the state convener for the committee.
PTI
Arkamoy Datta Majumdar   |   Calcutta   |   Published 03.12.20, 01:53 AM

All India Kisan Sangharsh Coordination Committee, a Left-backed farmers’ organisations, announced on Wednesday that  it would organise a march to the Raj Bhavan in Calcutta on December 16 to protest against the Centre’s new farm laws  and express solidarity with the farmers protesting on the borders of the national capital.

“We have planned a series of programmes throughout December, including a march to the governor’s residence, to protest against the laws and state-sponsored atrocities against the farmers in Delhi,” said Amal Halder, the state convener for the committee.

“First, there will be a public meeting at Rani Rasmoni Avenue (in Calcutta). From there, we would go to the governor to submit our deputation,” he added.

In the past two days, the committee organised more than 500 small and big rallies across Bengal in a bid to “inform people about the state atrocities on farmers in Delhi”.

Tens of thousands of farmers have amassed on the borders of Delhi to protest the new farm laws.

According to committee leaders, farmers in Bengal are facing additional problems because they aren’t being able to sell their produce at rates fixed by the government.

“The farm laws will have adverse effects on farmers. Moreover in Bengal, corrupt Trinamul leaders have forced farmers to sell paddy at less than Rs 1000 per quintal,” Halder said.

At present, the government has fixed a minimum support price of Rs1,880 a quintal for paddy, Halder added. To protest against this, members of the committee will come out on the roads on December 20 with sacks of paddy and block roads in different districts across the state.

The Bengal Congress has decided to hit the streets on the issue of price hike with a programme titled Bajare Bajare (in the markets).  Adhir Ranjan Chowdhury, the state party chief, has asked workers to organise rallies, street corner meetings and marches in all districts of the state from Thursday on this issue. On December 9, Congress workers across the state will submit deputations at district headquarters.