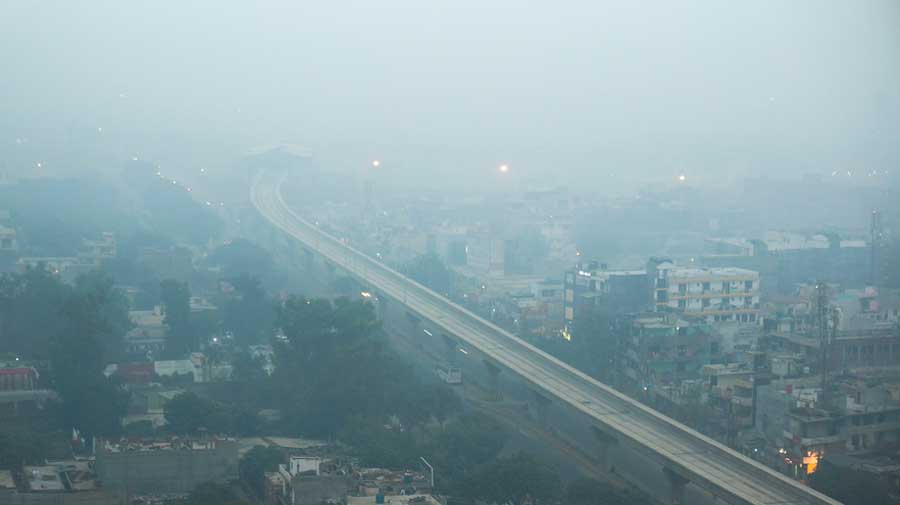 The WBPCB official said garbage burning and coal fired chulas in street food stalls are adding more poisonous smoke and it was not always possible for the pollution watchdog to keep a tab on every vendor and person.
File picture
Our Bureau, PTI   |   Kolkata   |   Published 15.12.21, 05:56 PM

In parts of North Kolkata, the AQI even breached the 300 mark which is categorised as very poor.

An official of West Bengal Pollution Control Board (WBPCB) said the AQI was 281 at the air monitoring station in Fort William and 276 in Ballygunge at 2 pm on Wednesday.

The AQI was 261 at Jadavpur, 245 at Bidhannagar, 238 at Victoria Memorial and 228 in Rabindra Sarobar area, the official said, adding everywhere it was poor which means breathing discomfort for a considerable time for those susceptible to lung problems.

However, the AQI in Rabindra Bharati University air monitoring station in north Kolkata at the same time was 322 which is categorised as very poor in environmental terms. Very poor means acute respiratory problem for those having chronic lung ailments and breathing difficulty for others.

Only one week back, the Air Quality Index of 20 (good) was registered at Victoria Memorial, 43 (good) at Ballygunge, 33 (good) at Rabindra Sarobar, and 51 (satisfactory) at Rabindra Bharati University, the WBPCB said.

A maximum of 90 per cent and a minimum of 80 per cent improvement in the AQI of Kolkata was reported after the cyclone-induced rain lashed the city, a record low for the city in the month of December in the last four decades but as the rains stopped, the sky cleared and the wintry conditions returned, the air quality went for a toss, environmentalist Somendra Mohan Ghosh said.

The WBPCB official, however, said the air quality index zooms up due to the foggy condition as the particulates in the air cannot rise much above the ground level.

"However we have not lowered guards and undertaken all measures to curb vehicular pollution. Fifteen year old vehicles are not allowed in the city," he said.

Ghosh alleged "the administration is not conducting checks of diesel vehicles, mostly the commercial ones which are running all around the city. The pollution under control certificate is being issued without any stringent monitoring and the police and pollution watchdog seem to be not vigilant enough."

He said hydrocarbon and particulate emission should be checked in all petrol and diesel BS6 vehicles.

The WBPCB official said garbage burning and coal fired chulas (ovens) in street food stalls are also adding more poisonous smoke and it was not always possible for the pollution watchdog to keep a tab on every vendor and person in every nook and corner unless people become aware.

"We are doing everything possible with the help of police and administration," he added.