Kailash Koch, the general secretary of the proscribed terror outfit, and his wife had on Thursday surrendered before director general of police Manoj Malviya 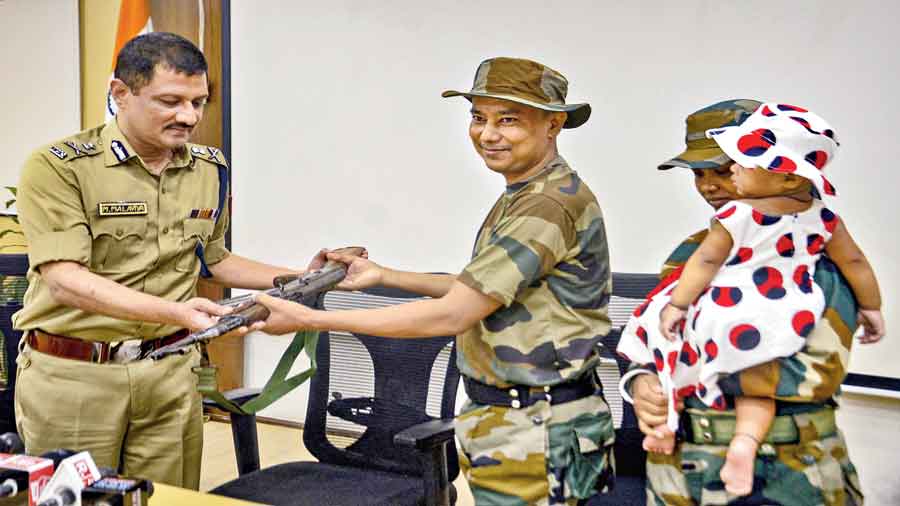 Jeevan Singha, the self-styled chief of the Kamtapur Liberation Organisation, has claimed that the surrender of the outfit’s second-in-command Kailash Koch alias Keshab Barman was a “farce” and he had been captured by Bengal police from Bangladesh earlier.

Koch, the general secretary of the proscribed terror outfit, and his wife had on Thursday surrendered before director general of police Manoj Malviya at Bhabani Bhavan in Calcutta.

He urged other militants to surrender and return to the mainstream and claimed some KLO members would follow him soon.In a video message from an undisclosed location, Singha, who is suspected to be in Myanmar with some armed cadres, said: “The surrender of Kailash Koch is a farce. It was nothing but a drama as he had been in the custody of the state police for months. We had mentioned earlier that he had been picked up from Bangladesh with his family. We are not perturbed by such attempts of the Bengal government. It is nothing but a political move.”

Retired police officers said the prompt reaction from the KLO — the video was released within 24 hours of Koch’s surrender — showed that Singha wanted to prevent other militants from following in Koch’s footsteps as there was a possibility of a rift in the organisation.

“Kailash Koch was the second most important man in the outfit. His surrender, that too, before the Bengal government whom Singha had been bypassing rattled him. That is why he issued a video message to control any further damage,” said a retired police officer who had worked in north Bengal.

Singha had taken initiatives to hold peace talks with the central and Assam governments bypassing Bengal. He also named the KLO’s representatives for the peace parleys. The KLO representatives for the peace talks doubt if the parleys can be held without involving the Mamata Banerjee government. “He (Singha) has named us… but there are serious doubts. Several cases, including charges under UAPA, are pending against him and his associates in Bengal. Unless the Bengal government participates in the talks, the negotiations would not be effective,” said one of them on the condition of anonymity.Some former KLO militants who are serving as home guards in Bengal — the Mamata Banerjee government provided them with the jobs — or are into small businesses to run their families have demanded that they, too, be brought under the ambit of the new rehabilitation package.

“We were only provided with jobs of home guards. But in the new package, a number of additional financial assistance ranging from house rent to expenses of children’s education and health insurance have been included. The state government should provide us also with such assistance too,” said a former militant based in Alipurduar district.