The boys who come to the Eden Gardens from Yogendrangar to sell their purple headbands, flags and jerseys are swearing by the Jamaican all-rounder who is winning match after match for KKR 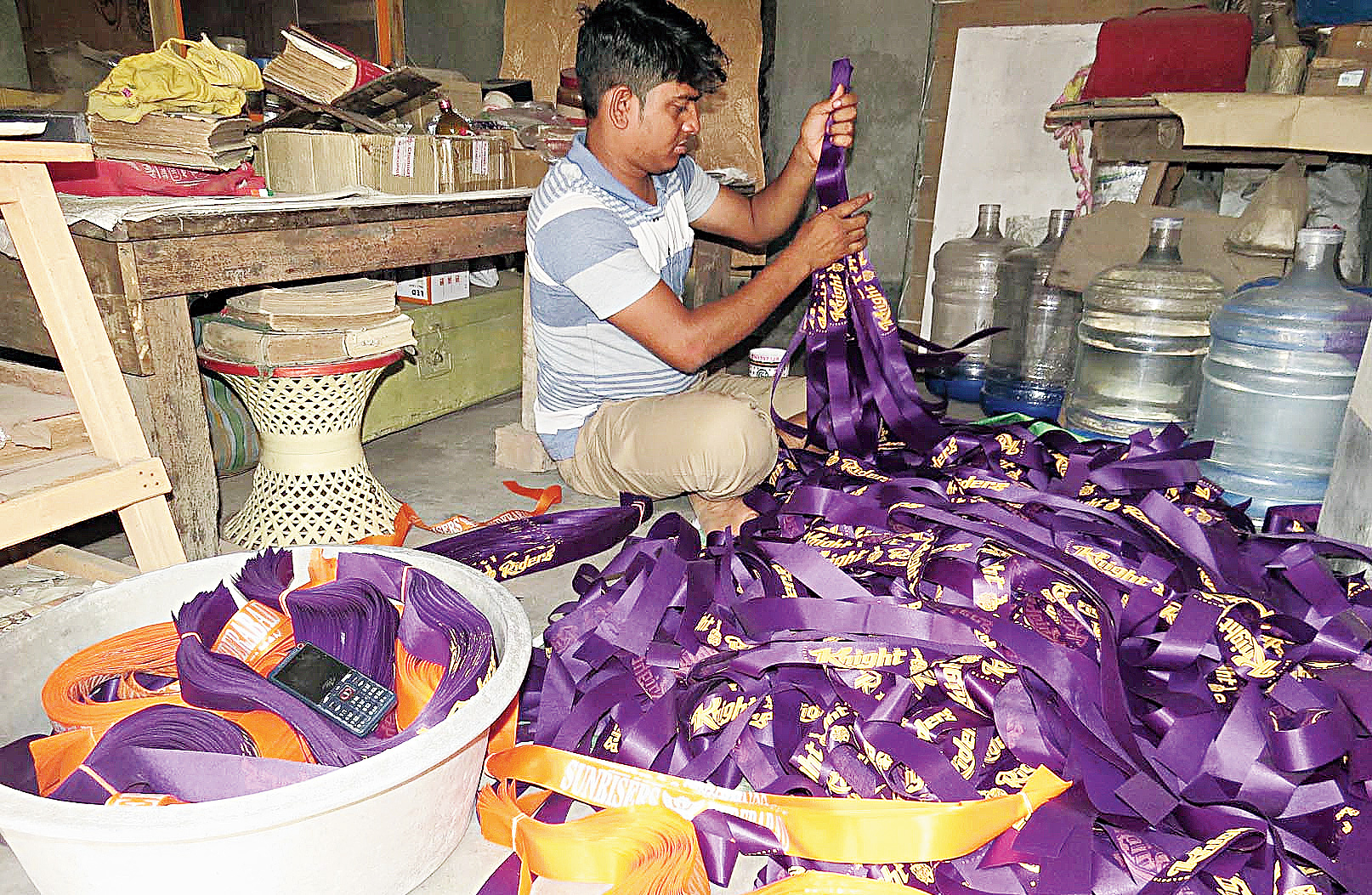 The IPL has just begun but Andre Russell has already emerged as the darling of Yogendrangar, the colony in New Barrackpore is where the unofficial IPL fan gear comes from.

The boys who come to the Eden Gardens from Yogendrangar to sell their homemade purple headbands, flags and jerseys are swearing by the Jamaican all-rounder who is winning match after match for Kolkata Knight Riders.

“The first day we carried jerseys with only the team logo. But after his 19-ball 49 against Sunrisers Hyderabad, fans started asking for jerseys with his name,” said Sukdeb Pal. The 17-ball 48 against Kings XI Punjab two nights later further boosted his popularity. Now after Thursday’s blitzkrieg in Bangalore — Russell hit an unbeaten 48 off just 13 balls and snatched victory from the jaws of defeat — of the 300 jerseys that Pal has placed orders for, half are to bear Russell’s name.

Sukanta Bar was seen selling purple jerseys with Russell on the back for Rs 100 ahead of the match against Kings XI Punjab. “He is the only saleable player in the team,” he grinned.

His younger brother Manikanta, one of the biggest IPL gear merchants in the colony, agreed. “Of the 700-odd KKR jerseys we have sold, over 200 had Russell’s name.”

Captain Dinesh Karthik is a distant second. “Some people do not like to support foreign players. They are asking for Karthik’s jersey,” Sukdeb said.

The king of the jersey market nationally is Mahendra Singh Dhoni. “There is Virat Kohli, too, in terms of fan following but based on their respective team’s performance we are banking on Dhoni jerseys to outsell all others,” says Manikanta, who like, many of his peers, travels to other cities, too, with IPL gear.

Boys in Yogendranagar ready fan gear before heading out to the Eden Gardens on match day.
Sudeshna Banerjee

“The prices we get elsewhere are double of what we get in Calcutta. There are 700-800 of us here vying for customers. In other cities, there are at best 20-30 hawkers,” said Manikanta, in the business since the start of IPL.

Dhoni’s Chennai Super Kings has won most of its matches so far with Kohli’s Royal Challengers Bangalore yet to open its account on the points table.

So the next week is crucial for business for the Yogendranagar boys with both Kohli’s and Dhoni’s teams set to play at the Eden Gardens.

Production was slow to pick up at the start of the season. “We were worried that with the Lok Sabha elections scheduled in summer, IPL might be shifted out of the country,” said Ripon Saha. “Thakur bnachieyechhen (The Lord saved us),” said his mother, touching her joined palms to her forehead. Selling IPL ware is a major income source for the unemployed youth in the colony and the entire family pitches in during production.

The headbands, soaked in purple dye and with the KKR logo printed on each, need to be cut from the cloth, counted and bound in bundles of 50. “My wife helps out. Unless they are organised, it is difficult to manage when customers mill around you at the shop,” says Manab Adhikari.