Assistant professor was attacked by suspected BJP supporters on December 30 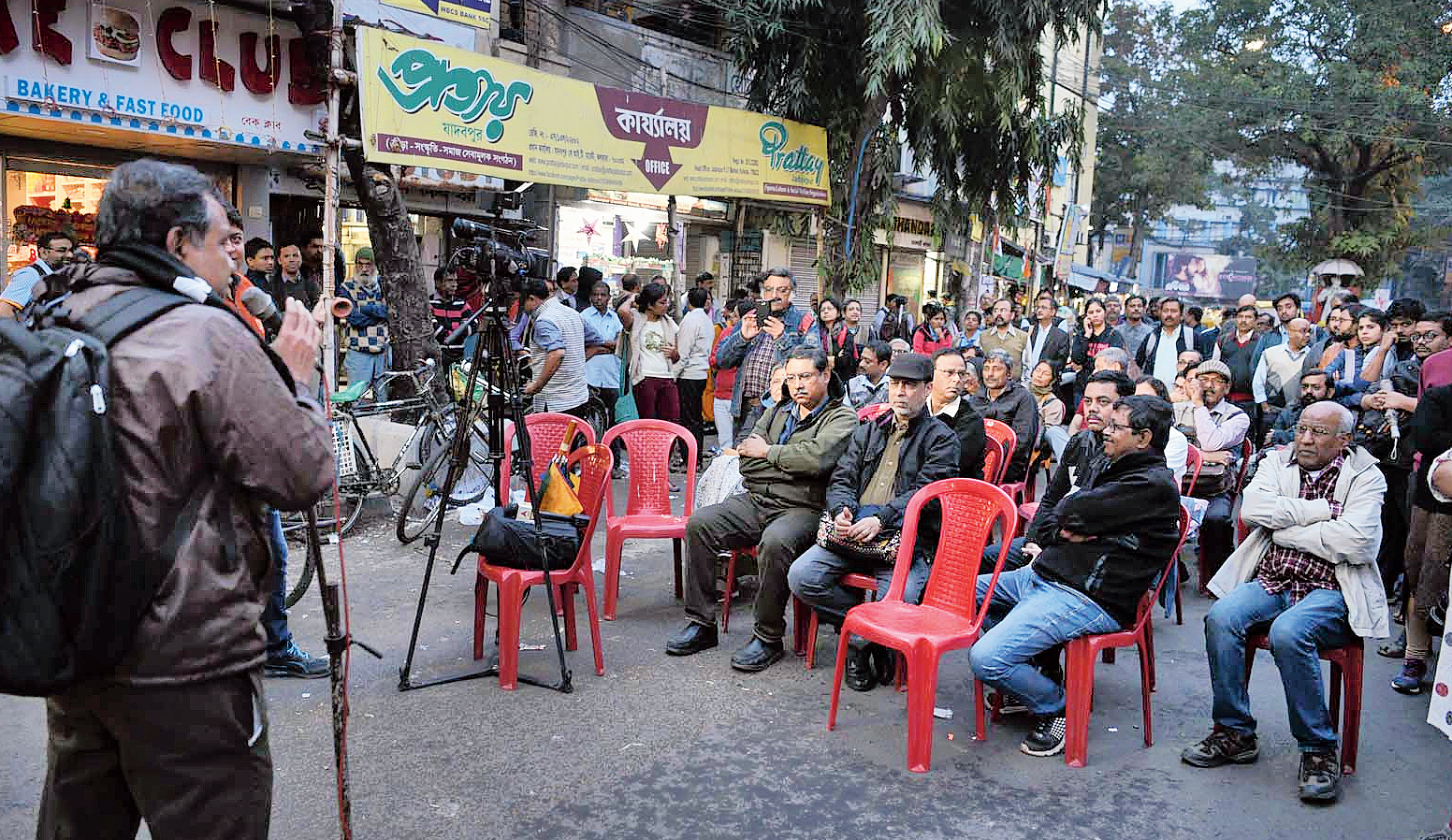 The meeting organised by teachers of Jadavpur University near the 8B bus stop on Thursday; (below) some of the teachers who were present at the protest.
Pictures by Gautam Bose
Subhankar Chowdhury And Subhajoy Roy   |   Jadavpur   |   Published 02.01.20, 10:45 PM

Teachers of Jadavpur University came out to protest the attack on an assistant professor and a threat message to another teacher by suspected BJP supporters seeking implementation of the Citizenship (Amendment) Act and the National Register of Citizen (NRC).

The Jadavpur University Teachers’ Association (JUTA) held the rally at the same spot near the 8B bus stand where the assistant professor was attacked by suspected BJP supporters on December 30.

Over 100 teachers from engineering, science and humanities faculties braved the evening drizzle and remained seated during the hour-long protest meeting.

“The gathering was held just to convey the message that we are not scared of them,” said Partha Pratim Ray, an associate professor of physics.

The teachers said though they were worried over the attacks on the JU teaching fraternity, they knew how to fight back.

“On Monday, the teacher was attacked in full public view for protesting BJP leaders’ hate speech. On Wednesday, a teacher of the journalism and mass communication department was issued a veiled threat through Facebook messenger because he expressed concern about a student who had gone to rescue the teacher on Monday. They are targeting JU because the teachers and students have been vocal against the black acts. But we know how to resist them,” said Nilanjana Gupta, a professor in the English department.

The two teachers who were subjected to attack spoke at the protest meeting.

In her speech, the assistant professor said the attack was not yet over as she was being constantly trolled by BJP supporters.

“The attack did not end with what happened on Monday. I am being trolled constantly on Facebook. But I am not going to close my account. Let the people see how low they can stoop,” she said.

Was she relieved to see that so many teachers came out in support of her?

“I have studied at JU for five years. So I know the spirit of JU. Teachers here always stand up to threats posed by divisive forces,” the teacher told Metro.

Swantan Chattopadhyay, the teacher of the journalism and mass communication department whom a BJP functionary had addressed as “Sir” and said “aapnake aamra chine rakhchhi (We have marked you)”, said: “I had to come to speak against these attacks. I had only expressed concern about one of my students who went to rescue his teacher. If one can be subjected to chilling threat for this, you can realise the extent of threat that is there. We have to resist in unison and be vocal against these forces,” he said.

Chattopadhyay’s complaint to the cyber crime cell of the police is being probed, sources said.

The gathering drew many former students and teachers from other campuses. Soumya Sahin, who teaches law and economics at the West Bengal National University of Juridical Science (NUJS), attended the protest meeting.

What brought him to the meeting? “The attack on JU teachers should not be viewed in isolation. The BJP is out to attack free-thinking, independent-minded individuals because they won’t support their divisive design. We have to collectively resist them by breaking the boundaries that divides campuses,” said Sahin, who got his PhD certificate in economics at the JU convocation held on December 24.