His visit is part of Union home minister Amit Shah’s plan to rebuild the state unit from scratch under direct surveillance of the central leadership, sources said 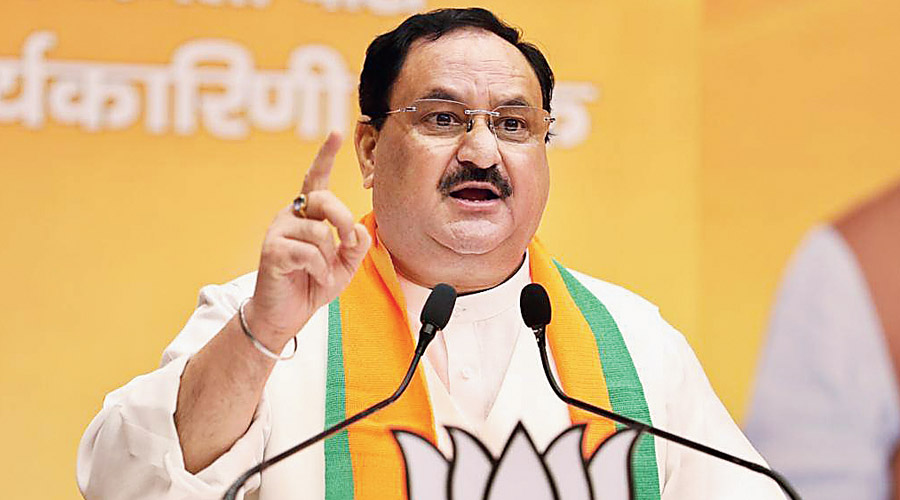 BJP’s national chief J.P. Nadda will be on a three-day tour of Bengal starting Wednesday, a visit that comes in the backdrop of growing unrest within the party and amidst rumours of impending defections by legislators.

According to sources within the party, Nadda’s visit is part of Union home minister Amit Shah’s plan to rebuild the state unit from scratch under direct surveillance of the central leadership. Over three different meetings Nadda will meet the party’s state executive committee, the public representatives and members of the district, Mandals and cells.

“The elaborate itinerary of the national president proves that he is trying to reach out to all factions of the party. He is trying to motivate and boost the confidence of workers at all levels,” a source in the party said.

Riddled with inner feuds, electoral backlashes and defections, the state unit has on multiple occasions tried to reach out to the central leadership. However, the polls in Uttar Pradesh and four other states prevented them from paying attention to Bengal.

With the polls in these five states over and complaints against the current state leaders heaping on Delhi’s tables, Nadda will reportedly try to address the issues of the Bengal unit.

Nadda will land in Calcutta on Tuesday night. On Wednesday morning he will be meeting the state executive body at the National Library. His meeting with the public representatives and workers from districts, cells and Mandals are scheduled on Thursday.

On Sunday, just three days ahead of Nadda’s visit, a former vice-president of the minority wing of the state unit had emailed him seeking an appointment during his stay in Calcutta.

Samsur Rahaman, the sender of the email, wished to meet Nadda with a 10-member delegation to apprise him about the “true condition of our present organisation under the present leadership”.

“When Amitji (Shah) had come to Bengal in May he had said that from now on either he or Naddaji will keep visiting the state to revamp the organisation. We look forward to Naddaji’s addresses and how he tackles the current problems,” a source said.

Moreover, Nadda’s visit, for many leaders, is also meant to ensure that there is no cross-voting in the ensuing presidential polls in July. The BJP-led NDA is falling short of the majority mark by 1.2 per cent. If the public representatives of the BJP from Bengal don’t vote in favour of the NDA’s candidate, the party will be in deeper waters.

The series of defections in Bengal has prompted such a reaction from the national chief, sources said.

BJP’s strength in the Assembly has been reduced to 70 from 77. The number of MPs from Bengal has come down to 16 from 18. Trinamul general secretary Abhishek Banerjee has said that more from the BJP were queuing up to join the Trinamul.

“Naddaji will be visiting Hooghly during his tour. This is because there are rumours that Hooghly MP Locket Chatterjee might defect to the Trinamul,” another source said.

BJP’s chief spokesperson Samik Bhattacharya, however, refuted the claims that Nadda was “worried” about the organisational weakness of Bengal BJP.

“BJP in Bengal is in quite a strong place. There is no reason to think that Naddaji is worried about it,” Bhattacharya said.