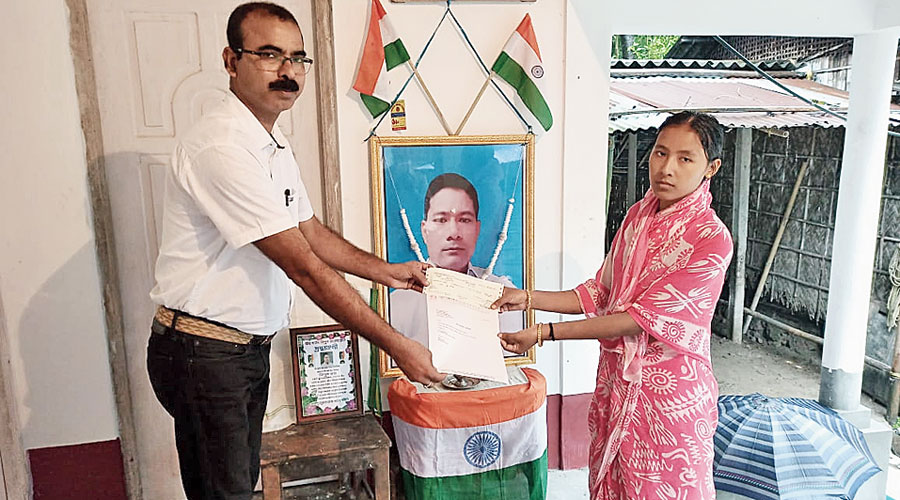 A director of a tea estate in the Dooars and his friends have together raised funds for the families of two army men from Bengal who were killed in a violent face-off between Indian and Chinese soldiers in Ladakh last month.

The two martyrs were Bipul Roy, 35, from Bindipara village of Alipurduar district and Rajesh Orang, 24, a resident of Belgoria in Birbhum. The relatives of the deceased were provided with cheques for Rs 2,77,700 each.

Rumpa, the spouse of Roy, was so overwhelmed by the benevolence of Ajoy Jhunjhunwala and his friends that she couldn’t speak much other than thanking them for the aid.

Jhunjhunwala is the director of Rajabhatkhawa tea estate in the Kalchini block of Alipurduar district.

While Rumpa was handed the cheque by Sudhir Kumar Das, the manager of the tea garden, on Saturday, Orang’s family in Birbhum had received the aid a few days before.

Das said Jhunjhunwala had been moved by the martyrdom of the two soldiers and consulted with his friends on how they could stand by the duo’s families.

“The friends of our director instantly responded and a sum of Rs 5,55,400 was collected shortly. The amount was equally split and handed over to the martyrs’ families,” Das added.

The tea estate manager said Jhunjhunwala and his friends would feel obliged if the sum helped Rumpa in raising her daughter.

The benefactors hoped that other organisations would also extend helping hands to the families of the soldiers who had laid their lives for the motherland.

The Bengal government had announced a compensation of Rs 5 lakh each for the next of kin of Roy and Orang who had belonged to the Bihar regiment of the army.

They died in the Galwan Valley of Ladakh on June 15 night.