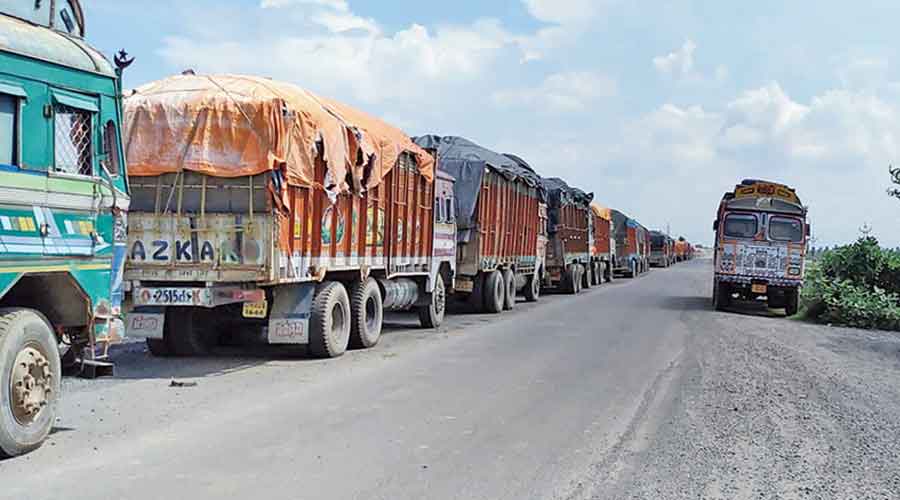 Sunday’s suspension of the border trade was a consequence of the events that took place on Saturday when only 50 per cent of the goods-laden trucks could cross the border because of power cut between 10am and 4pm.
File picture
Soumya De Sarkar   |   Malda   |   Published 07.09.20, 02:17 AM

Border trade between India and Bangadesh through the Mahadipur land port in Malda came to a halt for four hours on Sunday following allegations of delay in the installation of a power generator and acts of corruption levelled by the Mahadipur Exporters’ Association and Mahadipur Clearing & Forwarding Agents’ association.

The trade resumed at noon after customs officials assured the exporters lobby of looking into their grievances.

Sunday’s suspension of the border trade was a consequence of the events that took place on Saturday when only 50 per cent of the goods-laden trucks could cross the border because of power cut between 10am and 4pm.

“The computers went kaput following prolonged power cut and the necessary challan and other documents for export could not be generated. This meant only 50 per cent of trucks could cross over to Bangladesh,” alleged Bhupati Mandal, the secretary of carry-forward agents’ association.

Members of the two associations held protests on Sunday against the halt in the trade on the previous day.

The protests led to the disruption in the export for four hours on Sunday.

“The 10 computers at the customs office do not function during power cuts. The customs department had brought a generator about three months back, but for some reason, it is yet to install it. About 300 trucks carry goods to Bangladesh every day barring Friday,” said an exporter.

The other grievance was that the customs authorities allow some truckers to jump the queue.

“Some customs officials allow trucks at the back end to jump the queue. We have been protesting against this for some time, but to no avail,” alleged an exporter.

N.K. Naskar, the assistant commissioner of customs, who met the exporters and the C&F agents on Sunday, said their grievances were being looked into.

Sources have said goods worth Rs 18.33 crore are exported from the Mahadipur land port every day.

“The disruption in the trans-border trade for two consecutive days has resulted in a loss of nearly Rs 20 crore,” said an exporter.