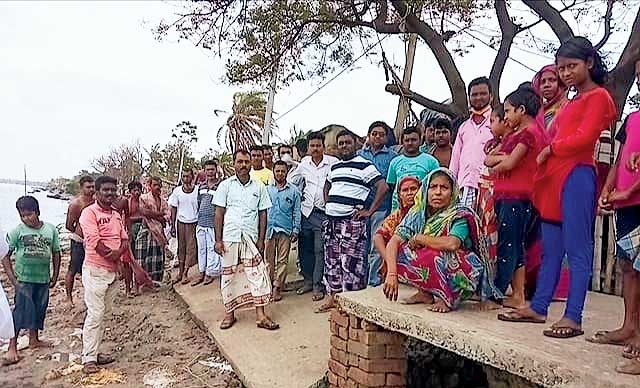 Villagers gathered on the bank of the Ichhamati river on Monday after the devastation.
Picture by Pashupati Das
Subhasish Chaudhuri   |   Basirhat   |   Published 01.06.20, 08:36 PM

A large area of Itinda near Basirhat in North 24-Parganas was inundated on Sunday night when a concrete dam on the Ichhamati river was washed away because of heavy tidal waves.

At least 300 fishing boats sank in the river and about 3sqkm area adjacent to the Ichhamati was inundated rendering about 4,000 families homeless.

The incident has come as shock for the North 24-Parganas district administration at a time it is gearing up to restrict damage in the Basirhat subdivision as the river is expected to trigger a ‘spring tide’ on Wednesday.

Local sources said the heavy tides had hit the concrete dam with great force on Sunday night and washed away the top layer of the accessible road.

“We survived Cyclone Amphan only to suffer a huge loss. We had stored some rice and lentils, but everything was lost last night,” Rabeya Biwa, a resident of Itinda ferryghat area, said.

Local sources said residents of at least five villages were inundated. Around 400 families who live in a stretch from Itinda ferryghat to Panitar, close to the Indo-Bangladesh border, suffered losses.

Sariful Mondal, a local resident and a Trinamul leader, said: “People here are solely dependent on fishing. But the heavy tidal wave took away over 300 fishing boats.”

“The Cyclone Amphan had caused severe damage to their houses last month, but the tidal wave has put their survival at stake.”

The affected people were taken to a local relief centre where they were served food and other essentials.

Residents of several villages such as Panitar, Nagraj Para and Itinda in Ghojadanga Panitar gram panchayat have been spending sleepless night apprehending fresh damage in the ensuing ‘spring tide’.