I will never support BJP: Gurung 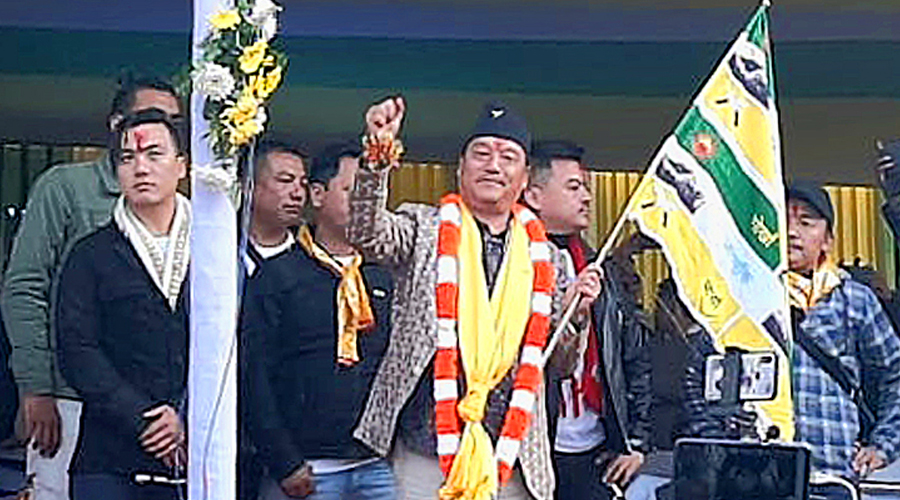 Bimal Gurung with a Gorkha Janmukti Morcha flag at the public meeting in Kalimpong on Thursday.
Picture by Passang Yolmo
Vivek Chhetri   |   Darjeeling   |   Published 08.01.21, 02:31 AM

Gorkha Janmukti Morcha leader Bimal Gurung on Thursday said the BJP had betrayed hill people and he would never accept that party again even if he had to sacrifice his life.

The assertion is a change from Gurung’s oft-repeated stance that he would support the Trinamul Congress in the upcoming Bengal Assembly polls, but would back any party that accepted Gorkhaland in the 2024 general election.

“The BJP has betrayed us…..I will not accept the BJP even if my life goes,” Gurung told a public meeting at the Mela Ground in Kalimpong. He had supported the BJP for 12 years before dumping it for Trinamul recently.

In his address, Gurung even praised the Congress for setting up the Darjeeling Gorkha Hill Council and the Gorkhaland Territorial Administration and including Nepali language in the 8th schedule of the Constitution.

Gurung alleged that the BJP had been trying to centre its hill politics on the premise that he would be unable to return to Darjeeling because of the police cases slapped on him by the Bengal government during the 2017 violent Gorkhaland agitation.

“The BJP’s politics was to keep me away from the hills. They were doing nothing for the hill people but they told me that I was being provided with security or else, I would be finished. Did I wait for three years to hear this? I walked out to finish them through the ballot,” said Gurung.

The Gurung camp of the Morcha that vowed support for Trinamul said at the Kalimpong public meeting that it would field candidates in seven Assembly seats in north Bengal.

“We will have our candidates in Darjeeling, Kalimpong, Kurseong, Matigara, Malbazar, Madarihat and Kalchini. We will not vote for Trinamul in these seats. But Trinamul will vote for us,” said Anil Lopchan, a senior youth leader of the Gurung faction.

“In other 11 seats (of north Bengal), we will vote for Trinamul,” Lopchan added.

Even though no final decision on seat sharing has taken place, many believe the Gurung faction is trying to send a strong signal about the seats it is eyeing.

Binay Tamang and Anit Thapa, who lead Gurung’s rival faction in the Morcha, have been sending a subtle message on their intent to field candidates in the hills.

“We were told to support Trinamul in the last Lok Sabha election with an understanding that we would field our candidates in the hills in the Assembly elections,” said a senior leader of the Binay Tamang camp.

Gurung’s rally drew an impressive crowd in Kalimpong and he tried to send out a message that he had “arrived” to voice local concerns. He raised the issue of a shopping complex  coming up in “the Girls High School area” (in Kalimpong) and lack of voice for people allegedly affected by hydro and railway projects in Kalimpong district.

The Morcha leader also announced that he would hire “90 social media” workers who had helped the party during the agitation and would later adjust them in various jobs. “I am the one (to come to power soon). Don’t worry. It’s just a matter of time,” said Gurung.

The Tamang camp alleged that Gurung’s supporters had vandalised their office in Kalimpong during early hours of Thursday and filed an FIR against Gurung and senior leaders in his faction.

Bijay Sundas, a leader of the Gurung camp, rejected the allegations and in turn accused the Tamang camp of staging a drama.