S.P. Sharma, the general secretary of the ABGL, has managed to galvanise support against the party for its failure to deliver these two key poll promises in the hills 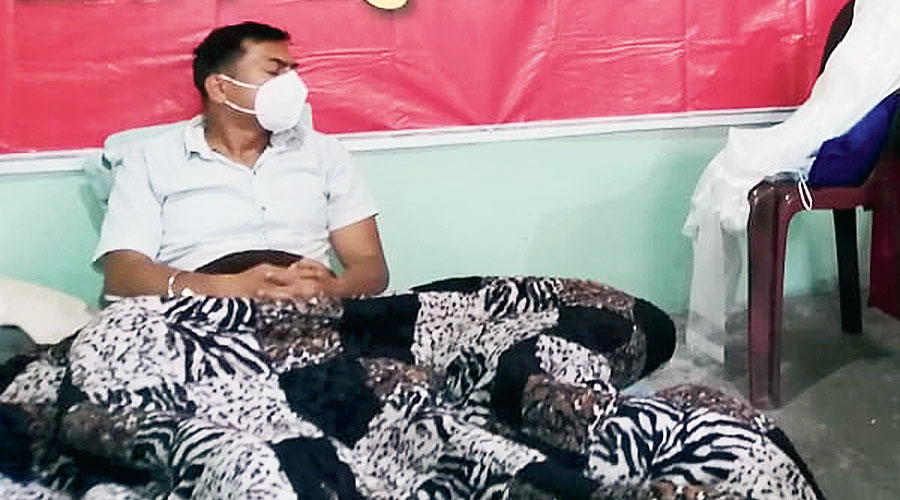 S.P. Sharma’s Akhil Bharatiya Gorkha League (Bharati Tamang faction) polled fewer votes than Nota in the hill seats during the Assembly elections, but his indefinite fast from Sunday to ask the BJP and its Darjeeling MP Raju Bista on the headway in tribal status for 11 hill communities and a “permanent political solution” for the region has swivelled the spotlight on the faction.

Sharma, the general secretary of the ABGL (Bharati faction), has managed to galvanise support against the BJP for its alleged failure to deliver these two key poll promises in the hills.

Since Sunday, the faction’s office has been teeming with well-wishers from even rival entities, as Sharma on Monday continued with his hunger strike that seems to have increased the pressure on the BJP.

On Sunday, Ajoy Edwards, the president of the GNLF Darjeeling Branch Committee, surprised all by meeting Sharma at the ABGL party office at Laden-la Road in Darjeeling.

The GNLF is an ally of the BJP. Edwards tried to convince Sharma to work together to put pressure on the BJP to fulfil these demands instead of starting an indefinite fast.

“We too are not eternally bound to the BJP. If they don’t fulfil the demands before their tenure is over in 2024, they will have no standing in the hills. Until then, let us work together to apply pressure on BJP,” said Edwards.

Sharma, however, went ahead with his fast. Edwards left, wishing him all the best.

Soon leaders of Bimal Gurung faction of Gorkha Janmukti Morcha, a party instrumental in providing a foothold to BJP in the hills in 2009, trooped in to support Sharma.

Bimal’s rivals, the Gorkha Janmukti Morcha faction now headed by Anit Thapa, were the next to come to the office.

During the 2021 Assembly election, Sharma’s candidates managed to garner 4,939 votes in all while the number of people who voted for Nota from the three hill seats were 7,090.

The ABGL is the oldest party in the hills and SP Sharma is now with Bharati Tamang camp for the past one year. The ABGL is divided into three factions.

Bharati Tamang is the wife of Madan Tamang, who was hacked to death allegedly by supporters of the then undivided Gorkha Janmukti Morcha in 2010. Against this background, the presence of leaders of both factions of the Morcha at the ABGL’s office was significant.

Keshav Raj Pokhrel, secretary-general, Morcha (Anit Thapa camp) even garlanded the photograph of Madan Tamang at the party office. Pokhrel is named as an accused in the Madan murder case.

“Not just the BJP, all the parties that had supported the BJP in the 2019 Lok Sabha election will be responsible if anything untoward happens to Sharma,” said Pokhrel.

All this support for Sharma seems to have made the BJP uncomfortable.

Neeraj Zimba, the GNLF leader who won the Darjeeling Assembly seat on a BJP ticket, had tried to make light of Sharma’s hunger strike announcement a few days back. “We will deploy our supporters to ensure that the hunger strike is strictly enforced by Sharma,” Zimba had joked.

But now, Zimba is silent. The BJP is also silent. Edwards has left for Delhi to string together various outfits and parties to mount pressure on the BJP to fulfil the two demands.

“The BJP is under tremendous pressure now. Sharma may not be a mass leader, but the issues that he has raised are what the hill masses strongly connect to,” said an observer.

Edwards decision was independent of Sharma’s hunger strike decision and he plans to rope in Darjeeling BJP MP Raju Bista, too, in this campaign.

“However, none can deny  that pressure on BJP to deliver on their poll promise had never suddenly been so strong,” said the observer.