Hung out to dry: fair and brand-new clothes 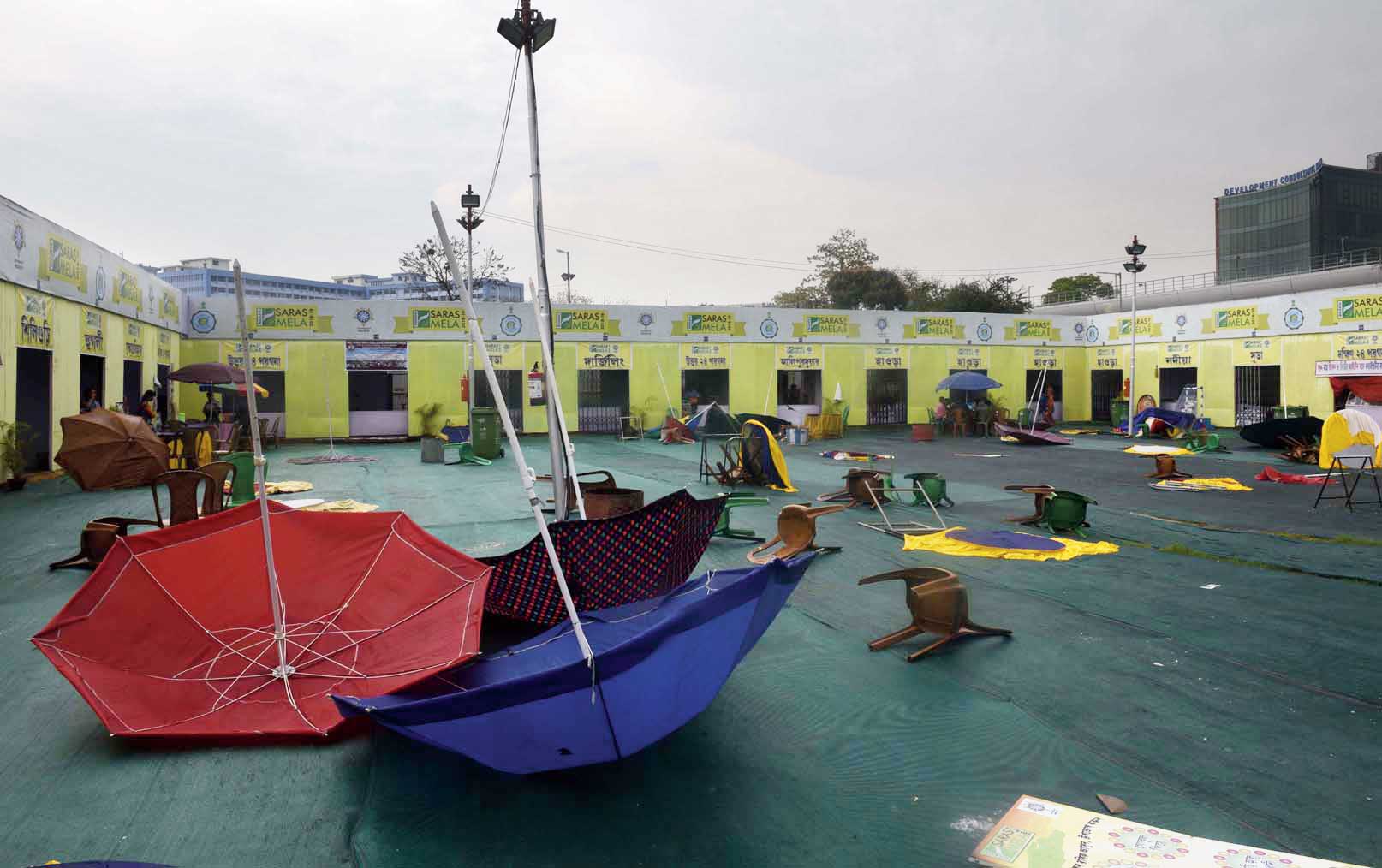 Row after row of clothes lines were set up and clothes, curtains, shawls and dress materials were hung out to dry at the Central Park fairground as the sun came out on Monday afternoon.

They were all on display at the Saras Mela when a squall struck around 4.25am. As roof after roof were blown away, everything in the stalls got drenched in the rain.

Padma M. Reddy, 37, a member of a self-help group from Telangana said she and her team members were taken aback to find their stall had no roof when they reached the ground in the morning.

“All the saris and women’s handbags kept inside the stall were drenched. We have to dry everything before we can sell them,” Reddy said.

Mousumi Das, 36, an artisan from Sajnekhali in South 24-Parganas, said the roof of her stall was intact but rainwater had seeped in and drenched her products.

Everything had been hung out on a clothes line to dry, she said. “We will have to iron the bed sheets and saris.”

Another artisan, Bhakta Bhaskar, from East Burdwan’s Katwa, said the tarpaulin and plywood used to build the stalls were “not of good quality”.

Bhaskar is at the fair with wooden animals and birds. “The other day some of us were discussing how the stalls would not stand a chance if it rained. And our worse fears came true,” he said.

The food court, too, was ravaged. Broken plastic chairs and tables could be found strewn almost everywhere.

The 14th edition of the Saras Mela is organised by the state’s panchayat and rural development department, along with self-help groups and artisans from Bengal and other parts of the country.

More than 300 stalls (handicraft, pickles, plants and textile) had been set up. The textile stalls have been the worst hit.

“The wind was howling, dragging with it innumerable plastic chairs,” a guard at the fairground said.

Panchayat and rural development department officials have arranged electric irons for the artisans.

“We are repairing the stalls on a war footing and officials have been directed to help the participants,” Choten Dhendup Lama, the department secretary, said. “There have been no reports of any permanent damage.”

The disaster management unit of the Salt Lake sub-division pitched in with plastic sheets for all the stalls at the fair. “The rain is likely to continue and we handed out plastic sheets to ensure the artisans are better prepared this time,” an official said.

The fair resumed in the afternoon. It will continue till March 5.