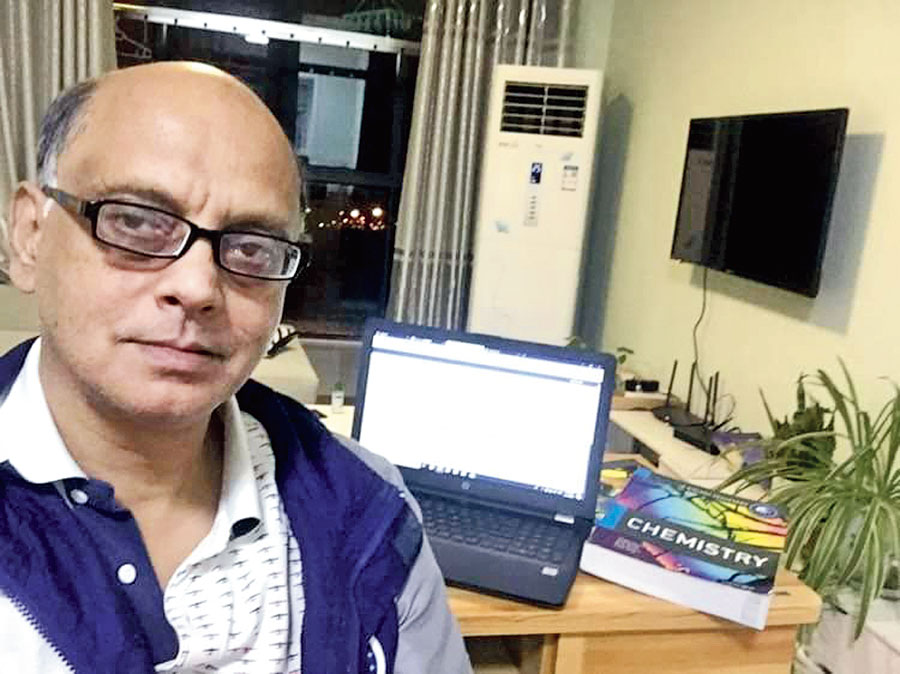 Home quarantine, on the outskirts of Shanghai, means not stepping out and being under survellience of a sensor that beeps and tapes across the door that tear if one tries to leave home.

Satyajit Banerjee, the former director of Calcutta International School and an alumnus of La Martiniere for Boys, returned to China on March 20 and has to be in home quarantine till April 3. He had come to Calcutta on January 18 for a scheduled holiday ahead of the Chinese New Year.

Banerjee — who teaches chemistry in the IB curriculum at Wuxi United International School in Jiangsu province, about 150km from Shanghai — is allowed to open the door of his 22nd-floor apartment only when supplies reach his doorstep and, that too, in the presence of the housing estate’s quarantine committee.

“I reached just before midnight. Upon arrival, the quarantine committee sealed my door. They ensure delivery of food and other essentials and the door has to be opened in their presence. All payments are to be made online,” Banerjee said.

A resident of an apartment in Suzhou, another city in China, opened the door thrice and received a call from police every time as they were alerted by the beeping sensor.

Those under home quarantine are clearly told by the authorities that it is illegal to step out and warned about the consequences. They are also provided with a helpline where they can call in case they fall ill.

Banerjee said the responsibility of a person in home quarantine does not end by staying indoors, s/he also has to send a daily health update.

When he reached China, there was a long wait on the tarmac itself and it took him almost six hours to complete the formalities at the airport. “Health officials scrutinised the passport and took my temperature on the flight while we were on the tarmac. The same process was followed in the terminal, and by the time I was done it was six hours,” he said.

“For those coming from any of the countries that are under alert, the passengers are put in a hotel quarantine at the passenger’s expense. India is not on that list yet. At the end of the scrutiny, the passengers get a green health sticker on their passport,” he said.

Those who were in Wuxi during the worst crisis had to register with police, according to Banerjee. If a person travels by plane or train or if s/he has come from countries that are under alert, the police are notified.

Wuxi has been in a phased lockdown for close to six weeks, Banerjee said. “Initially, people could go out to get basic supplies wearing a mask. Gradually, that too stopped after a complete lockdown. At one point, the city was grounded,” he said.

Banerjee, who has been in China for the past three years, said the people are “law-abiding” and compliance is “peaceful”.

“Police are quite helpful and even-tempered and once the government made the announcement about social distancing, no meetings or gatherings, the streets emptied out,” he told Metro over Messenger.

Schools in the Jiangsu province are expected to reopen by the month-end. But Banerjee has been taking regular online classes from the first week of February. While in home quarantine, Banerjee misses seeing the spring flowers in bloom. “Even those not under home quarantine have to take permission to go to the parks. The city is slowly coming back,” he said.