A number of locations in the adjoining foothills also experienced a sudden bout of rainfall, which increased the chill feel across the region 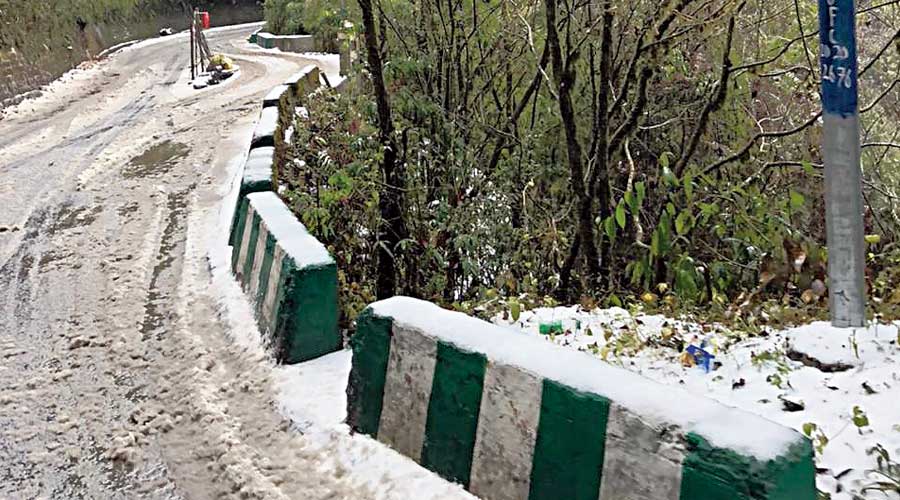 Snow accumulated on the road between Sukhiapokhri and Ghoom in the Darjeeling hills
Telegraph Picture
Vivek Chhetri, Avijit Sinha   |   Siliguri, Darjeeling   |   Published 21.01.22, 02:16 AM

The Darjeeling hills received snowfall for the third time in less than a month on Thursday afternoon as the mercury dipped across north Bengal since Wednesday night.

A number of locations in the adjoining foothills also experienced a sudden bout of rainfall, which increased the chill feel across the region.

The Tiger Hill, which is situated above 8,000ft and is 11km from Darjeeling town, received snow. Stretches between Third Mile and Jorebunglow also received snow, accompanied by rain.

The higher reaches of Darjeeling district, including Sandakphu and Phalut situated at almost 12,000ft, had received snowfall on Christmas.

Four days later, on December 29, it once again snowed in areas much closer to Darjeeling town, like Ghoom and Jorebunglow.

“The weather conditions changed and there were snowfall and rainfall because of western disturbance that is passing through eastern India, coupled with moisture incursion from the Bay of Bengal. The conditions are likely to be similar in the next four to five days and there is a forecast of light to moderate rainfall in the hills and in the adjoining plains. The cloud cover, coupled with rain and snow, will obviously bring down the temperature, especially during day time,” said G.N. Raha, a meteorologist at the India Meteorological Department office in Gangtok .

“The minimum temperature went below the average minimum at places like Malda, Balurghat and Kalimpong by two to six degrees in the past 24 hours,” said a source.

Throughout Thursday, the sky was overcast in most parts of north Bengal. As the evening rolled, the cold increased, coupled with a chilling breeze.

Many people, both in the hills and the plains, were seen visiting markets known for woollen garments. In the late evening hours, most of the rural areas, including some popular tourist locations in the Dooars, were engulfed in dense fog.

There is a forecast of dense fog cover where the visibility can reduce even to 50 metres, said sources.

In Sikkim, snowfall occurred in higher reaches of the state, especially in north and east districts.

“There are chances of similar snowfall and hailstorm in the next few days,” said a weather expert.

An alert has been issued for drivers so that they drive cautiously in night hours.

“Policemen have been posted in prominent crossings in and around Siliguri and mobile units have been asked to monitor traffic movements on highways,” said an official of Siliguri Metropolitan Police.