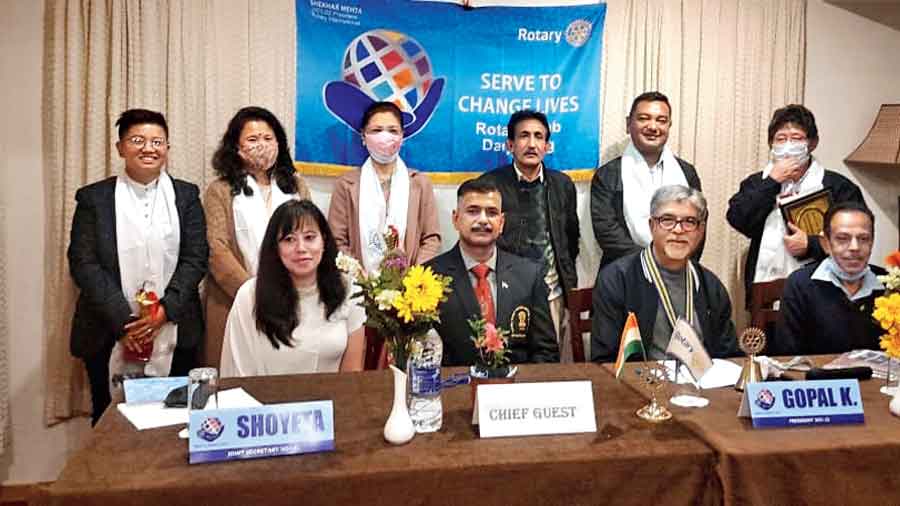 Nisha Gurung (extreme left in front row) with other award winners and officials of the Rotary Club of Darjeeling at the award function on Saturday
The Telegraph
Vivek Chhetri   |   Darjeeling   |   Published 29.09.21, 01:28 AM

For Nisha Gurung, a hockey player from Darjeeling, it definitely is not a man’s world.

The 23-year-old from Ging tea garden in Darjeeling has achieved the rare distinction of coaching a men’s hockey team.

“In 2019, I coached the Darjeeling district men’s team  for the state hockey championships held in Calcutta,” Nisha told The Telegraph on the sidelines of an award ceremony organised by the Rotary Club of Darjeeling on Saturday.

Women hockey coaches are not so frequently seen. Women coaches in charge of men’s teams are rarer, not just in India but across the world.

A 2016 survey by US-based Women’s Sports Foundation, founded in 1974 by the legendary tennis player Billie Jean King, had found that in college sports only 3 percent of men’s teams were coached by women. The majority of those teams are minor or co-ed sports. In contrast, 57 percent of the women’s teams are coached by men.

Nisha, currently pursuing a course with Hockey India and Asia Hockey Federation to qualify as a technical official, first made a mark as a player.

“When I was in school (Nepali Girls Higher Secondary School), teachers asked me if I would play hockey. Without a second thought, I said yes,” said Nisha.

There was no stopping Nisha thereafter.

She started representing Bengal from 2010 and was the vice-captain of the state team at the Sub-Junior Girls National Hockey Championship held in Patna.

She also started representing the state at the senior category and in 2013 her team stood third at the senior national hockey championship.

“In 2018 I started working at Darjeeling Children House of Montessori (a Darjeeling school) and it is here I started coaching the boy’s team,” said Nisha.

The very next year, she was asked to coach the district’s all men’s team.

Did her wards listen to her?

“It was difficult to coach boys as initially they would not listen to me. Things improved later,” Nisha smiled.

Nisha was last year made the secretary of Darjeeling Gorkha Hill Hockey Association. Its president is also a woman, Kamlesh Rai, who has been a team manager in state and national level games.

Although Nisha is working with the montessori, she plans to take a degree in coaching from the Netaji Subash National Institute of School. “I have been selected for a course to be a technical official by Hockey India and Asia Hockey Federation. Once I complete it, I want to complete a degree to be a certified hockey coach,” said Nisha.

On Saturday, Rotary Club of Darjeeling awarded the Outstanding Youth Award to Nisha. “Her achievement made us sit up and take notice. It is not often that we come across women coaches for a men’s team,” said Gopal Khemani, president, RCD.