Large parts of Haldia and Kharagpur towns are submerged 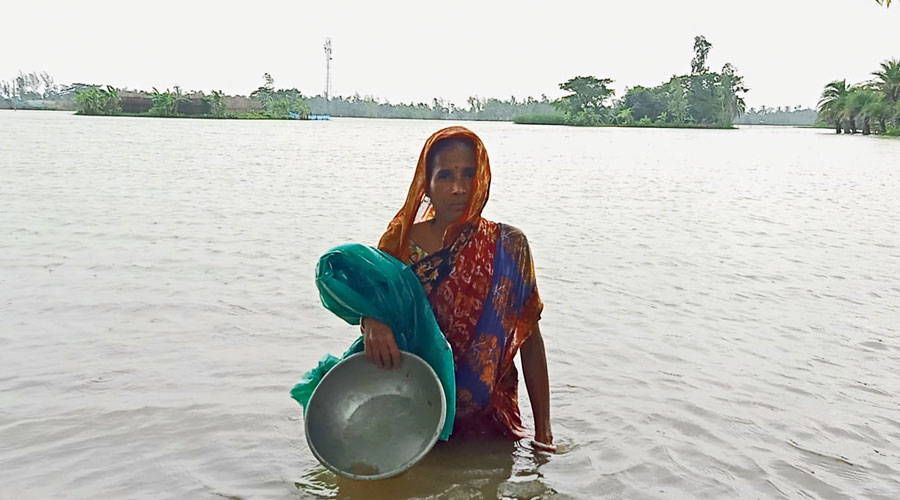 A woman wades through floodwater in a village of South 24-Parganas.
Picture by Mehaboob Gazi
Anshuman Phadikar, Snehamoy Chakraborty   |   Tamluk(EastMidnapore), Calcutta   |   Published 30.07.21, 02:24 AM

Continuous, heavy rainfall over the past few days has disrupted life and livelihoods in at least half a dozen south Bengal districts and rendered thousands of people homeless.

Large parts of Haldia and Kharagpur towns are also submerged.

Sources in the Met office in Calcutta said in the past 24 hours, districts to get the most rain were South 24-Parganas, East and West Midnapores. Among towns, Midnapore, Haldia, Canning and Diamond Harbour got the highest rainfall in the state, with 230mm, 215.8mm, 185.6mm and 92.1mm, till Thursday 6am.

Much of Haldia township is submerged and the dock complex inundated. Port officials said there was no power supply to Haldia dock and township since Wednesday night as most substations went under water. Frequent lightning rendered the vessel traffic management system defunct and stalled the waterway movement. There was no inward and outward vessel transport in the past 24 hours.

“All possible attempts to normalise the situation at the Haldia dock complex are on ,” said Vinit Kumar, chairman, Calcutta Port.

Haldia residents called the situation “scary”. “We were asleep on Wednesday night and woke up to water in our room,” said resident Naresh Das.

Haldia apart, Nandigram and many other areas of East Midnapore went underwater.

“It is worse than Cyclone Yaas as entire Nandigram is waterlogged. We are trying to rescue people from flooded homes,” said Abu Taher, the deputy chief of Nandigram Panchayat Samity.

Most areas in Kharagpur town, including a part of the railway station, are submerged. Train services have not been disrupted, but senior officers are assessing the situation, said a senior official in South Eastern Railways.

Over a hundred villages in South 24-Parganas are under water. Officials said waterlogging was reported from Gosaba, Basanti, Kultali and Sagar blocks.

“We have rescued 9,265 persons and opened 76 camps in our district. There is no report of casualty or injury or embankments breached,” said P Ulaganathan, South 24-Parganas DM.

In Kakdwip, no business activities could be carried out in the wholesale market of betel leaves as the market was waterlogged.

Agriculture department officials in the four south Bengal districts said they feared a loss to aman paddy and vegetable cultivation as crops had submerged.

In North 24-Parganas, Sandeshkhali block is the worst-hit. A major part of the Sandeshkhali town, including Nazat police station, has been inundated since Thursday.