Give us jobs and ration, chant migrant returnees

In the wake of the nationwide lockdown in March, around 23,000 migrant workers came back to Jalpaiguri in phases and several of them are jobless 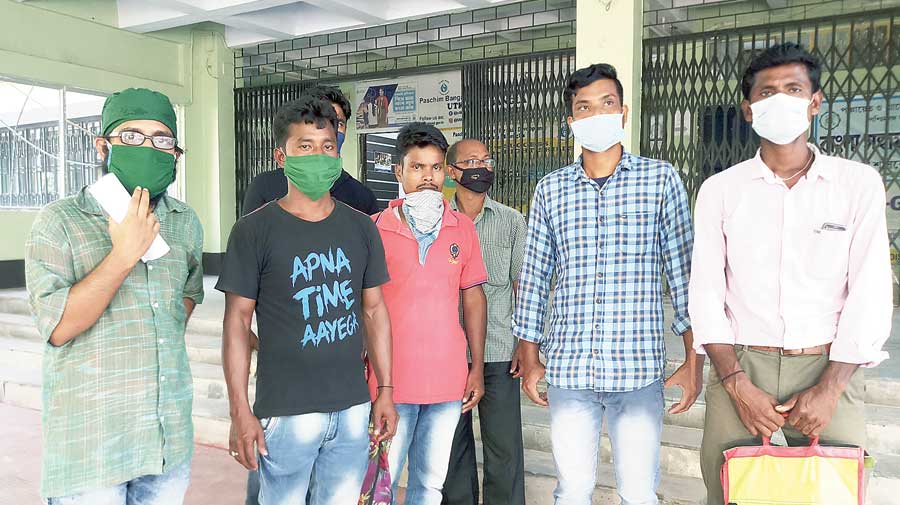 Some 200 migrant workers, jobless after being forced to come back home here amid the Covid-induced lockdown, went to the office of the district magistrate and demanded jobs under the 100-days work scheme, free ration and monthly financial aid to survive.

In the wake of the nationwide lockdown in March, around 23,000 migrant workers came back to Jalpaiguri in phases. Many of them are jobless or scouting for options.

Kamal Roy, a resident of Maynaguri block, said most of them used to work in Kerala.

“Ever since we have come back, most of us have not got jobs here. That is why we organised the demonstration and have urged the administration to see that we are provided with jobs under the 100-days work scheme (MGNREGS) and free ration. Chief minister Mamata Banerjee and many senior officials in the state government have time and again said that we would get such facilities,” said Roy, who had joined the protest organised under the banner of the Jalpaiguri Zilla Parijayi Shramik Samiti.

Umesh Roy, who is from Manikganj in Jalpaiguri Sadar block, said they also wanted the state to give them a monthly aid of Rs 7,500. He added that he was jobless for five months.

Jalpaiguri district magistrate Abhishek Kumar Tiwary said they would ensure that all these workers get free ration. “So far, around 11,000 migrant workers have been given jobs under the 100-days-scheme. But there are many who have been working in other states and do not have job cards (mandatory for jobs under MGNREGS). They need to be provided with job cards. We are working on the issue,” he added.