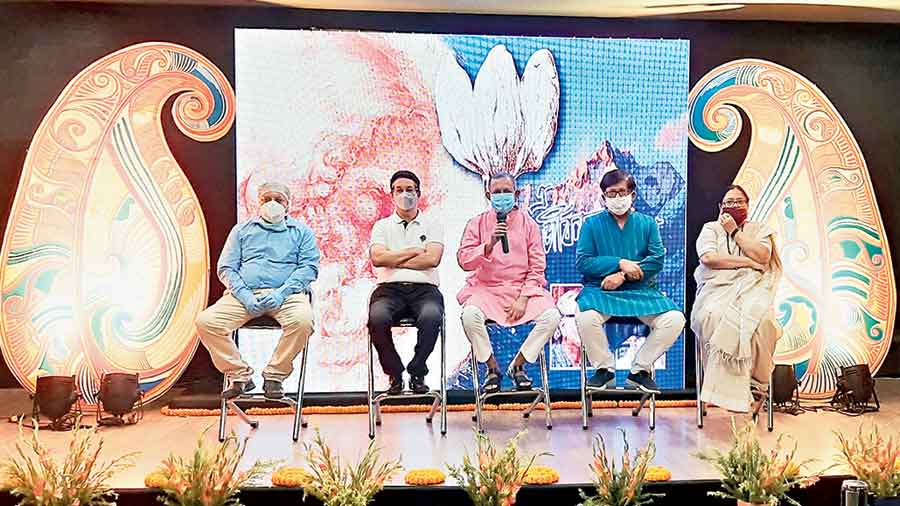 Bengal tourism minister Gautam Deb on Sunday announced that he had sung eight Tagore songs for an album slated for a January 1, 2021 release.

He also released the teaser of his album titled “E Jibon Punya Karo” at an event in Siliguri. “Through this album, we have tried to put forth a message of harmony in these troubled times,” Deb said.

Deb added that he had always been an avid listener of Rabindrasangeet but was convinced to take up singing by his Calcutta-based mentor, Aninda Sankar Majumdar.

“He mentored me and convinced me to take up the challenge of singing. The entire credit goes to him,” said Deb at the event.

Known for his proactive attitude in the field of administration and politics, Deb said that since November last year, he had been taking music lessons from Majumdar.

“Since March this year, because of the pandemic, we have at times thought of stopping the entire project. But as things gradually started getting (somewhat) normal, we decided to go ahead,” said Deb.

While this would be Deb’s maiden musical album, Chatterjee’s recitations make it an added treat. Chatterjee, who recently contracted the novel coronavirus, is under treatment in Calcutta.

The teaser suggests that the album was shot in the picturesque locales of Darjeeling hills and the lush greens of the Dooars.

“Making the album is just the beginning of a new journey for me,” said an emotional Deb. “It is like a transformation and taking refuge in Tagore. Through this album, we have tried to put forth a message of harmony in these troubled times. If everything goes fine, we will definitely try more such creative experiences in future,” he added.

Along with the album, the minister, who is one of the senior political leaders of north Bengal, has started recording his experiences in politics, an arena in which he stepped as a young man back in 1975.

“It is not an autobiography as such but I want to have a record of my experiences in politics,” said Deb.

Subires Bhattacharyya, the vice-chancellor of North Bengal University who was present on the occasion, appreciated the album. “For someone remaining busy in political and administrative activities most of the time, it needs courage to explore a new avenue. What the minister did deserves appreciation,” said Bhattacharyya.

In recent times, the most famous politician from Bengal who sings is Babul Supriyo. The Bollywood playback singer — with hits like Hum Tum to his credit — joined the BJP to win the Lok Sabha seat from Asansol. Supriyo is now a junior Union minister too.