Advertisement
Home / West-bengal / From ‘cut’ to ‘black’: money vs money

From ‘cut’ to ‘black’: money vs money 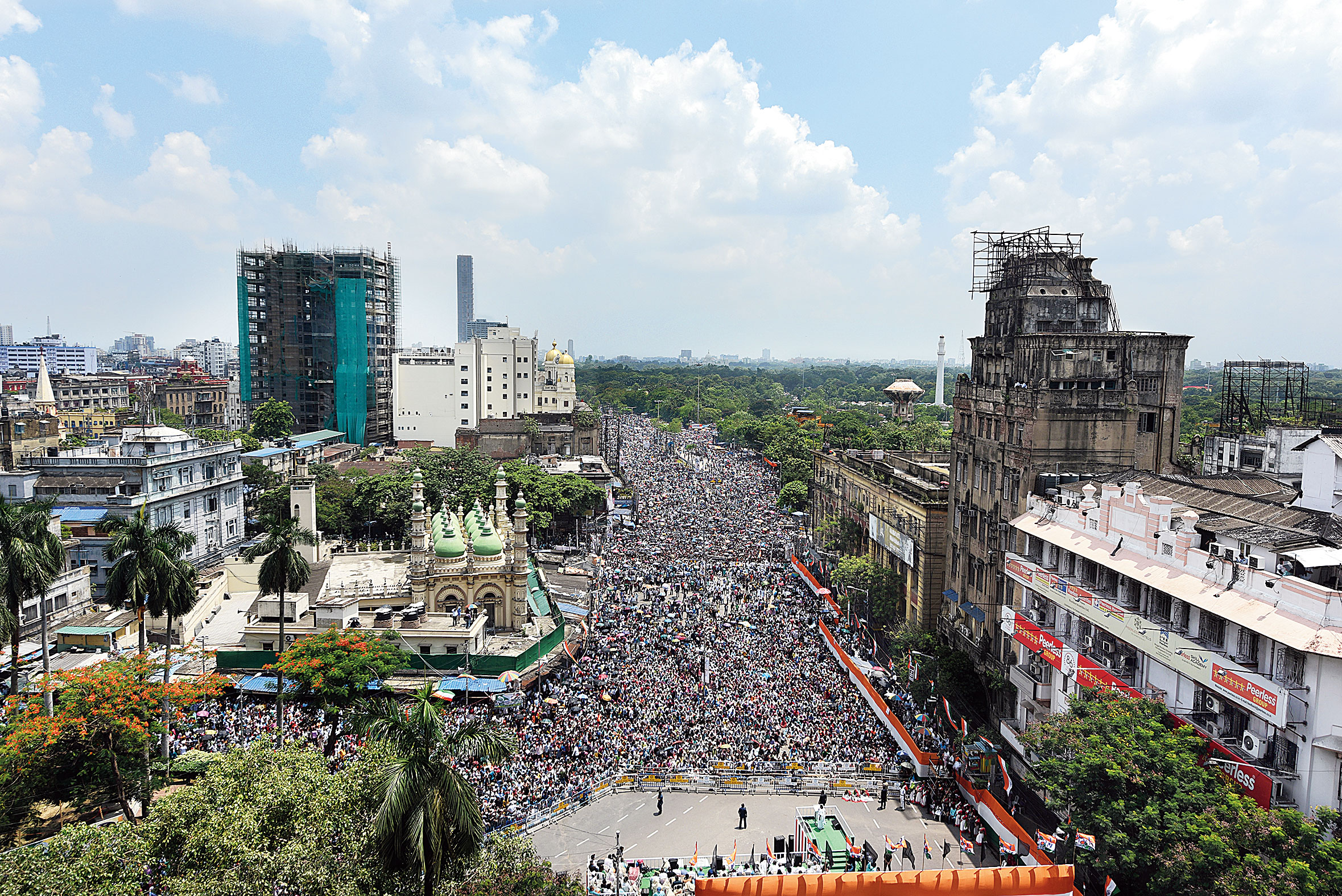 A panoramic view of the dais and the crowd at the Trinamul rally in Calcutta on Sunday.
Picture by Pradip Sanyal
Meghdeep Bhattacharyya   |   Calcutta   |   Published 21.07.19, 07:16 PM

Mamata Banerjee on Sunday brought up “black money” in an apparent bid to mitigate the chaos over “cut money” and to turn the tables on the BJP which had been organising movements across Bengal for the refund of bribes allegedly taken by Trinamul Congress leaders.

The Trinamul Congress chief coined a slogan — “Black money phiriye dao (Return black money)” — and lambasted the BJP over its alleged attempts to misuse her June 18 call for the return of “cut money”.

“Ami ekta mohot udyeshyo niye bollam (I said it with a noble purpose). That small development initiatives of our poor government — such as Kanyashree, Sabuj Sathi, Khadyo Sathi — should reach the masses, to be alert so that nobody is able to take any share of the benefits,” the chief minister said in her hour-long Martyrs’ Day speech.

Mamata was referring to her televised address to Trinamul councillors on June 18 when she had asked them to return the cut money taken from the beneficiaries of the state government’s welfare schemes. Over 400 protests demanding the refund of cut money have taken place across the state since then. Several Trinamul leaders have purportedly returned lakhs of rupees taken as the cut money.

“Dacoit chiefs, the chiefs of thieves of the BJP started going to places, saying ‘return cut money’. The biggest dacoit, how dare you ask Trinamul to return money?” she asked.

Sources said Mamata’s instruction to repay the cut money — in the wake of the BJP’s impressive performance in the general election — had kept the attention focussed on Trinamul for nearly five weeks.

But on Sunday, the Trinamul chief tried to shift the focus to the BJP. 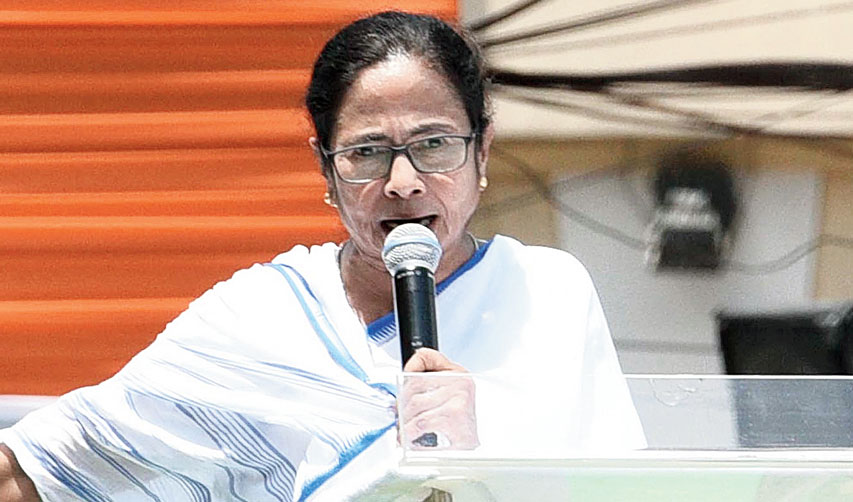 Mamata addresses the rally in Calcutta on Sunday.
Picture by Gautam Bose

“Trinamul is a party of the poor, which is why even lizards dare attack it. The party of the rich, even aeroplane, cannot dent it. Kotogulo kucho chingri aar kotogulo lyata mach, tadeyr boro boro kotha (A handful of shrimp and lota fish, such lofty statements they make). You took an immense amount of black money. You spent lakhs of crores on the elections. Return it all,” she said.

Mamata announced that Trinamul would launch a state-wide “black money phiriye dao” agitation at the block and booth levels on July 26 and 27 demanding the transfer of Rs 15 lakh from the BJP to the bank account of every citizen.

She alleged that the BJP was involved in scams in Bengal and asked: “Should I bring out the evidence, Gamcha Babu (apparent reference to BJP state chief Dilip Ghosh)?”

The chief minister said the state administration had been getting numerous corruption-related complaints against BJP leaders and it would start acting on them.

“The BJP takes cuts from schemes, like Ujjwala (Pradhan Mantri Ujjwala Yojana for LPG connections to women of BPL families). Its leaders have provided the information,” she said. “The mother of thieves shouts the loudest.”

Mamata also alleged that central investigation agencies had started hounding Trinamul leaders and those perceived to be close to her party after the general election. “They are threatening them over scams they have nothing to do with, telling them to contact this BJP leader or that, failing which they would be sent to prison,” she said.The chief minister — who repeatedly referred to the alleged horse-trading by the BJP to fell non-NDA governments in Karnataka, Rajasthan and Madhya Pradesh — accused the saffron camp of trying to engineer defections in Bengal.

“Such insatiable greed right after the Lok Sabha (polls)? Why is this rush to break (non-NDA) governments? Your very back will be broken soon,” she added.

BJP state chief Ghosh later said none in Trinamul had such “high market value” anymore. “Not even Mamata is worth Rs 2 crore now,” said Ghosh. He also condemned the chief minister’s “wild and baseless” allegations against the BJP.