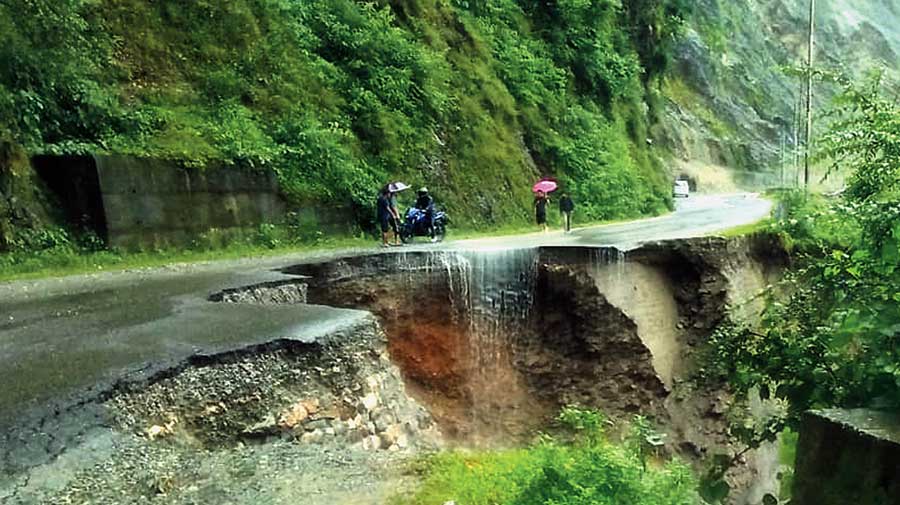 Road connectivity between Sikkim and Siliguri snapped on Wednesday when four landslides triggered by heavy rain struck NH10, the principal highway to the Himalayan state.

As traffic to Sikkim and Kalimpong came to a grinding halt, local people were not only asking when the debris would be removed but also wondering how long it would take to build an alternate road to the state that shares border with China.

Defence analysts and strategic experts have time and again emphasised the need to improve the connectivity to Sikkim by building an alternate road as NH10 passes through landslide-prone areas.

“We really don’t know when the alternate road to Sikkim and Kalimpong would be ready,” said Pradip Chakraborty, a bank employee who frequents the Darjeeling hills.

The Centre had approved the 250km-long road in 2015. The National Highway Infrastructure & Development Corporation Limited (NHIDCL) that functions under the Union ministry of highways has taken the task of building the road that would originate from the Dooars.

The road, sources said, would move along Damdim-Gorubathan-Lava-Kafer-Rhenock-Rishi route and connect Sikkim capital Gangtok via Pakyong.

“Work on the road is in progress but it would take at least two to three years to complete it. It seems the rail route to Rangpo from Sevoke would be commissioned before the completion of the new road,” said a senior official of the Sikkim government.

On Wednesday, debris, along with trees, fell on NH10 near Sevoke, around 20km from here. The second landslide occurred at Kalijhora, the site of Teesta Low Dam Project IV of the NHPC.

Further ahead, at Swetijhora — that is just a few kilometres from Kalijhora, a stretch of the road caved in, creating a crater on the highway and making it impossible for heavy vehicles to move.

The fourth landslide occurred at 29th Mile, beyond Swetijhora, and the road got blocked with boulders, earth and pebbles. A landslide had occurred there on Tuesday, too.

“It would take some time for the restoration of NH10 for heavy vehicles’ movement as has been informed by the PWD. As an emergency measure, heavy goods vehicles below 10 tonnes shall be diverted through Coronation Bridge-Damdim More-Gorubathan-Lava onward to Kalimpong or Rangpo (in Sikkim) via Bhalu Marg and back,” the advisory said.

Traffic between the Dooars and Siliguri via the Coronation Bridge was also hampered for some hours because of the landslide near Sevoke.

The connectivity snap has prompted the residents of the Dooars to demand again a bridge over the Teesta from Sevoke Bazaar (around 5km downstream the Coronation Bridge in the foothills) to the Dooars, parallel to the rail bridge.

“First of all, vehicles weighing 10 tonnes and above are now allowed through Coronation Bridge and secondly, landslides during the monsoon often affect traffic via this route,” said a representative of the Dooars Forum for Social Change, an organisation that has been working on the demand.