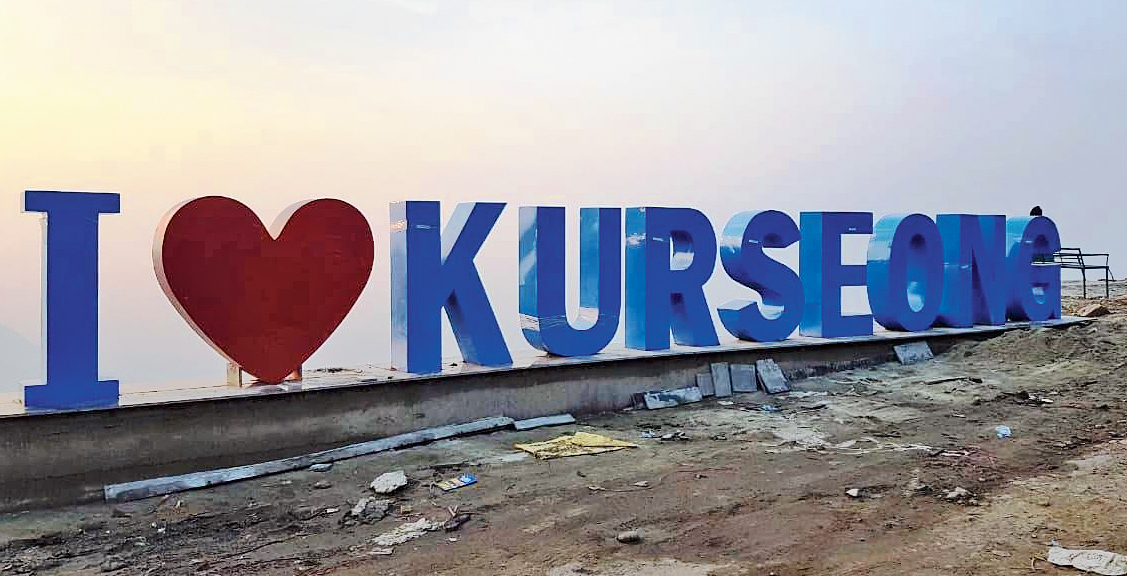 The GTA has started erecting huge signages at four major towns in the Darjeeling hills with a message for people to “love” their respective place.

Two 40ft long and 5ft high signages each will come up at Darjeeling, Kalimpong, Kurseong and Mirik.

The first signage has come up at a vantage point along Rohini Road in Kurseong. The signage made of concrete and steel reads: “I love Kurseong”. Instead of word “love”, the symbol is used (see picture).

The signage has a concrete base on which letters in steel frame stand.

“We want to stress the need for a sense of belonging of one’s place. We must start loving our place instead of only liking it. Once its done, we can make a huge difference in a different sector. This is why we are putting up the signages in Darjeeling, Kurseong, Kalimpong and Mirik,” GTA head Binay Tamang said.

The signage point at Rohini has already turned into a major selfie zone.

“Another signage will come up near Kurseong Tourist Lodge,” said Tamang.

In Darjeeling, the “I love Darjeeling” signages will come up at Chowrastha and Batasia. Kalimpong will sport the boards at Deolo and 7th Mile. Mirik will boast the signages near Mirik Lake and the picturesque Tingling View Point.

Each signages will feature the name of the respective place where its placed.

The GTA will spend around Rs 50 lakh to erect the eight signages, sources said.

Since taking over the GTA, Tamang has repeatedly been stressing the need to inculcate a sense of belonging of the place in people.

At a GTA event at Meghatar near Bijanbari recently, Tamang had lashed out contractors and construction firms and asked them to undertake development projects with a “sense of belonging”.