Parts of Bengal celebrate Independence Day for three days as it was on August 18, 1947 that they were declared a part of India 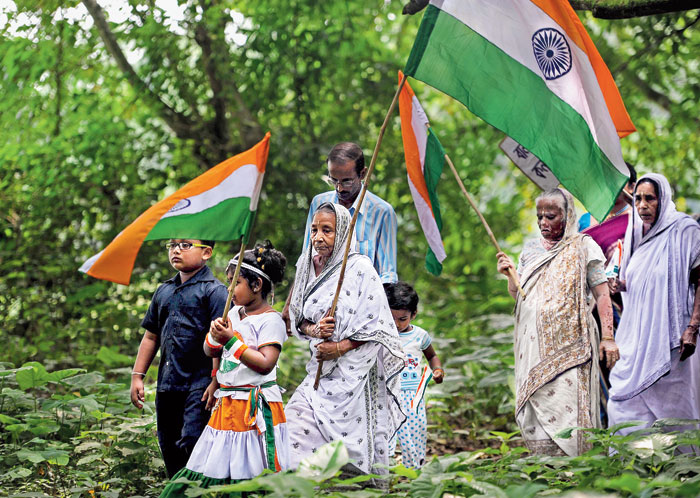 In Bengal’s Nadia and North 24-Parganas districts, Independence Day is celebrated on August 15, like it is in the rest of India. Two days later, however — on August 17 — some people take out processions again, cultural programmes are organised and the Tricolour is hoisted. August 18. Repeat celebrations on an even larger scale.

That day at Shibnibas, the old capital of the erstwhile king of Nadia, 110 kilometres north of Calcutta, there is a spot of boat racing across the Churni river. The vessels are bedecked with plastic Tricolours that flap about animatedly. At Ranaghat in Nadia, children and women sing patriotic songs, and at Bongaon in North 24-Parganas, a lawyers’ collective hoists the national flag and distributes sweets.

That Independence Day in these parts is a three-day affair has to do with Cyril Radcliffe, the Englishman who drew the boundaries of the new nations of India and Pakistan 72 years ago as joint chairman of the two boundary commissions for the two provinces — Punjab and Bengal.

While determining the line that would eventually slice Bengal, Radcliffe apparently awarded a chunk of Nadia to Pakistan or East Pakistan, as it was then known. Large parts of the then 24-Parganas, Malda, Dinajpur and the whole of Murshidabad were also assigned to East Pakistan. For three days — August 14 to August 16 — these areas were considered to be parts of Pakistan. And then on August 17, there was an official announcement by the Radcliffe Commission that only three Muslim-majority subdivisions of Nadia (Meherpur, Chuadanga and Kustia) and portions of three other districts (Malda, Dinajpur and Jalpaiguri) would go to East Pakistan. The rest would remain with India.

Celebrations on August 17 and 18 to commemorate the reunion of the two districts with India didn’t begin until 1998. That year, Anjan Sukul, a resident of Shibnibas, decided to revive the memory of Partition and the related confusion and chaos that most had forgotten.

He had heard the story several times from his grandfather, Pramatha Nath Sukul, a freedom fighter. For the Sukuls, August 15 had been a day of fear and anxiety; they had had to wait for three more days before they could breathe easy. Says Anjan, “Ever since I heard of this incident, I wanted to observe August 18 as the Day of Inclusion.”

But he knew he needed proof to substantiate what now largely remained in the realm of oral history. He began to look for recorded proof — books, periodicals, official documents. Also, there were anecdotes galore from people who had survived the ordeal. But these were not enough to secure permission to hoist the Tricolour on occasions other than what had been stipulated by the Centre and state government. Says Anjan, “Since it was not legal to organise such a celebration, we had to seek permission from the information and broadcasting ministry.”

Anjan claims that celebration of the Day of Inclusion began with Shibnibas. Kushaldeb Bandyopadhyay, a councillor of Ranaghat Municipality, says, “We have been celebrating August 18 as Bharat Bhukti Dibas for over a decade. Some people also commemorate August 17 as that was the day when the inclusion was announced.”

Tapas Bandyopadhyay, a former commissioner of Ranaghat Municipality, usually hoists the flag. Recalling the day in 1947, he says, “I was barely in my teens when this happened. Even though Hindus and Muslims co-existed peacefully, the period following Partition was somewhat traumatic. Members of the Muslim League hoisted the Pakistani flag in different places in Ranaghat.”

Some of their neighbours were planning to migrate or exchange their property with Muslims in India. Eventually, on August 18 they learnt that Ranaghat would remain a part of India. Says Bandyopadhyay, “I still remember how some freedom fighters broke the news into a microphone while singing patriotic songs, amidst chants of Vande Mataram. Pakistani flags were brought down and the Tricolour was hoisted.”

Bandyopadhyay’s shards of memories are corroborated by newspaper reports from 1947. A small one in one of the inside pages of the Anandabazar Patrika is datelined Ranaghat, August 15. It reads: “To commemorate the transfer of power, a joint body of the Congress and the Muslim League celebrated Independence Day. Following the Mountbatten Plan, Nadia was assumed to be a part of Pakistan, the new nation’s flag was hoisted at the Town Hall.” The banner headline of the Hindustan Standard edition of August 18 read: Bengal Boundary Award. Next line: Nadia, Jessore, Dinajpur, Malda and Jalpaiguri divided. Another report from Ranaghat in the Hindustan Standard dated August 21 read: Following the Radcliffe award, Ranaghat wore a festive appearance when a two-day programme was gone through (sic) in celebration of the Independence Day there on Monday and Tuesday [August 18 and 19] last... There were 31 gun fires when the national flag was hoisted there... Dawn of Tuesday broke with prabhat pheris singing the national anthem... A mile-long procession was on the streets... National flags were hoisted at the Court building…”

Newspaper reports from the time don’t touch upon the acute anxiety among the common people. But it is known that while drawing the border, Radcliffe faced many a demand from political leaders, influential business heads, regents, and some say even Viceroy Mountbatten. Radcliffe also faced misinformation as the maps and census reports supplied to him were either outdated or incorrect. And he had no time to crosscheck or undertake a field survey. He was not happy with members of the Boundary Commission and, above all, he never got to consult the millions whose fate he set out to decide.

“There was such confusion and the rumour mills were churning out all sorts of contradictory news,” recalls 83-year-old Nitaipada Roychowdhury, a former teacher of Matiari Banpur High School in Nadia. He continues, “Our ancestral home was in Jessore district, barely 13 kilometres from my current house in Matiari [near Shibnibas].”

Although speculation was rife that Jessore might be included in India (majority of the residents were Hindus), Roychowdhury’s father had a hunch that the district might go to Pakistan. So the family migrated to Matiari — to a relative’s house a week before Partition. But soon after they arrived, villagers said this place too would go to Pakistan. “There was so much of tension. Pakistani flags were hoisted on August 14 and Muslim League supporters shouted Allahu Akbar,” he recalls.

The confusion and the illusions of hope and despair that Partition raised has been poignantly described by Bengali writer Satinath Bhaduri in his 1948 short story Gananayak, or, Champion of the People. The time portrayed in the story is just before the official declaration of Radcliffe’s verdict. Just when people in the border areas were waiting with bated breath to know their fate.

Here’s an excerpt from Gananayak:

Achimuddi, a character in Bhaduri’s story, asks, “Huzur, what about Mirpur?”

Isn’t it in Malda district? Well, it has gone to Pakistan,” says Munimji [a trader’s clerk].

Achimuddi is so overwhelmed by the infinite grace of Allah that he can speak no more.

Pora Gosain, the priest of the Rajbanshi tribe, who has many clients in the area enquires, “And what about Bajargaon?

That’s under Titlia police station in the Jalpaiguri district.”

“Jalpaiguri! You need not worry about Jalpaiguri. By the grace of Ramji, that remains in Hindustan,” replies the priest. He adds, “It has to be — how can it be otherwise. We are here for several generations. How can it go to Pakistan… The governor-general is a sensible person. Narayan, Narayan.”

Bijoy Prasad Mallick is an 82-year old resident of Ranaghat. He says, “For three days it was almost like an information blackout for us. There were only rumours and people were leaving their homes for places they believed to be safe havens.” Mallick was just about nine and he remembers how there was silence and gloom in the neighbourhood and a ki hobey, ki hobey bhoi, or a fear of uncertainty. He recalls how only after the All India Radio bulletin of August 17, the celebrations erupted like a sigh of relief with a cautious eye on the future… His father, Sachindranath Mallik, led one celebratory procession with his friend, Amir Ali.

Today, 72 years after that fateful day when Anjan, Kushaldeb and others celebrate August 18, people of both communities participate in the events. One of the residents of Shibnibas, 84-year old Ansar Ali Mondal, hoists the flag every year. He says, “We never thought of leaving our birthplace even though some of my Muslim relatives and neighbours chose to shift to Pakistan. I celebrate the day because I feel my parents made a prudent decision by staying back.”

A sloppy surgery: How Cyril Radcliffe carved the Indian subcontinent