Why is Bengal’s silk route paved with cotton? The costs of silk are high, the benefits low 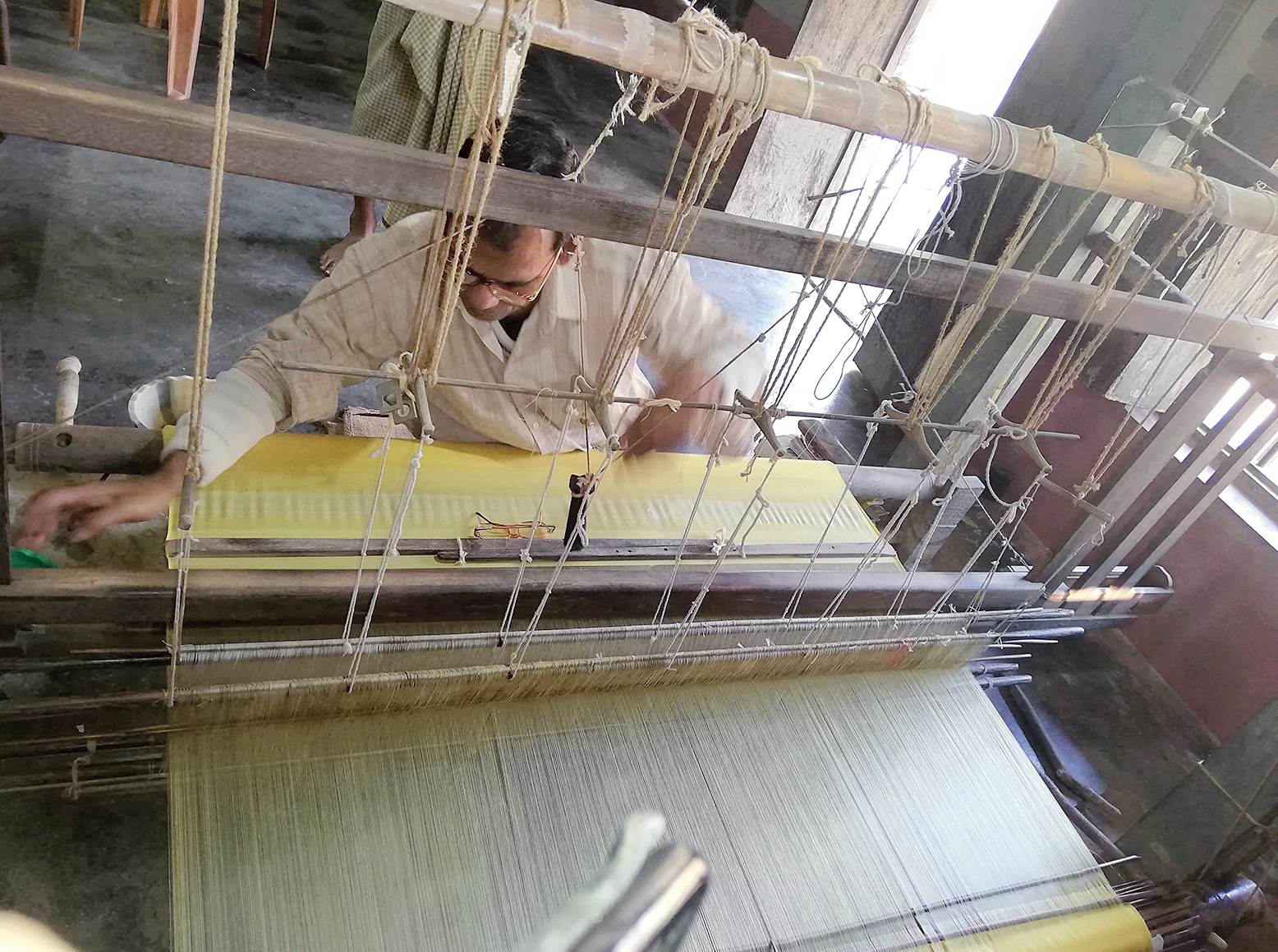 Chak Islampur or Islampur in Murshidabad district is the silk hub of Bengal. Less than an hour’s drive from the Berhampore railway station, the place looks like any suburb in these parts with long stretches of green along the Bhagirathi river. Also along the banks are the unmissable yards and yards of white cotton spread out to dry.

The car trundles down the dirt road, past a couple of pucca houses and several hutments with thatched roofs before stopping in front of an iron gate with the signage that reads “Chandrakanta Lalit Mohan Khadi Samabay Samiti”.

It is a Sunday, which is why officials at the centre are not present, but there is a constant hum emanating from the big hall opposite the entrance. It is the sound of the machine-operated spinning wheel. To the left of the entrance there is a semi-circular verandah and it seems to be covered with countless yellow thermocol balls with a stubborn stench about them. Those turn out to be cocoons of silk worms.

“The worms will have to be boiled in water,” says Mokhtar Sheikh, who is taking a break from operating the spinning wheel. He adds, “For 60 years I have been working with silk and worms. What I am doing is called pakdar, a technical term for wrapping around the wheel the thread extracted from the cocoons.”

On the longish extension to the verandah, there are a dozen or so men in tees and lungis twisting and bundling golden thread and stacking them in neat heaps. These very threads, so coarse to touch, when spun, turn into the famed Murshidabad silk.

“Of course, a lot of work has to be done before that,” says Mohammad Ismail with a broad smile. Ismail is one of the senior weavers. He continues, “After the cocoons are boiled in water to separate the worm from the thread, which turns a deep brown and is put out to dry. The insects are also dried in the sun and used as fodder and manure. Nothings goes to waste. The threads are then washed, dyed and ready to be spun into cloth.”

What about the cotton stretch along the Bhagirathi? Says one of the factory workers after a deep breath and a pause, “We produce silk but it is taken away to the market. The rest is not for us to know or tell. All I can say is that it does not pay to be a silk weaver. And that is why most weavers here have taken to cotton production.” 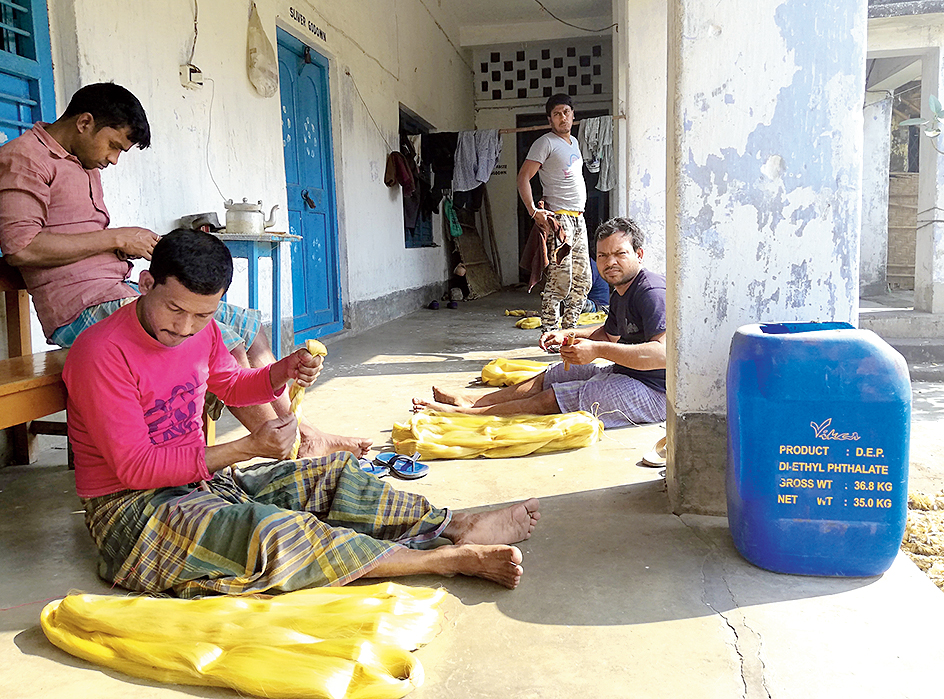 It was silk that attracted foreigners — the French, the Portuguese, the Dutch and finally the British— to Murshidabad. Researchers and historians have pointed out time and again how the soil here made it such an ideal place for mulberry cultivation. In the paper, “Murshidabad Silk Industry in West Bengal: A Study of its Glorious Past & Present Crisis”, Chandan Roy and Arindam Dey write about the soil rich in lime and oxide of iron and beds of nodular limestone and how Sir Streynsham Sham, an East India Company agent, explained that a large part of Kassimbazar (present-day Cossimbazar) in Murshidabad was planted with mulberry trees, the leaves of which were gathered to feed the silkworms.

As the British consolidated their position, they also came to gain monopoly on the silk business. The silk weavers of Murshidabad were forced to sell their products only to the East India Company.

Roy and Dey have recorded how after the birth of Manchester silk, the Comp-any systematically worked at bleeding and ultimately killing the prospects of Bengal silk. In 1769, it was declared that the manufacture of silk fabrics would be discouraged in Bengal; only raw silk manufacture would be permitted.

Years later, some Indian businessmen persuaded Mahatma Gandhi to include Murshidabad silk as one of the endangered products of India. And silk merchant Lalitmohan Saha of Chak Islampur was one of those who pioneered the Murshidabad silk revival. It was at his behest that Sir Jerajinijee of the All India Spinners’ Association recommended that the silk industry be brought under the fold of khadi and other village industries — in 1925.

The door of a pucca house in Chak Islampur is ajar. It is a weaver’s home. Through it the courtyard is visible, and it is a fiery red right up to the threshold from the dye used on the cotton yarn. Do they weave silk too? The response to the question is a slammed door. Another house, another door. This time a sullen young man says, “We do not weave silk. We dye cotton yarn. There are hardly any silk weavers in this village now,” and he walks away.

Rameshwar Dutta, 61, is one of the handful of silk weavers who is not unwilling to talk. He has been doing this for the last 40 years. “My home is my factory,” he says. His thatched mud hut has a loom inside and wound around it is golden yarn. In a small plastic bowl, there are reels of golden thread. There is a spinning wheel in another corner. “We have to make small reels,” he says and continues, “It takes nearly a week to a month to make a good quality yarn. The thread count of a Murshidabad silk sari is 2450.”

Rameshwar laments that he does not make jamdanis now though he knows how to. He points to the thaan or roll of silk he is weaving and talks about its measure —“It is 16/18 gaj (1 gaj equals 36 inches)”. He spews silk jargon — “The length of the material is called tana and the breadth is called bhorna.” He announces, “I am making matka silk here. The cheapest costs Rs 4,000 per thaan. The most expensive can go up to Rs 40,000.” He elaborates on how labour intensive the whole process is.

Working on loom is not easy and requires both technical skill and muscle power. A person needs to sit at least four to five hours at a stretch. Then there is a lot of washing and dyeing before the silk is soft enough. Rameshwar talks about his forefathers who were also silk weavers and then with the same deftness that he uses to weave, he says with a gesture of his hand across the forehead: “The spinning wheel is no more the wheel of fortune for the weavers of Murshidabad.”