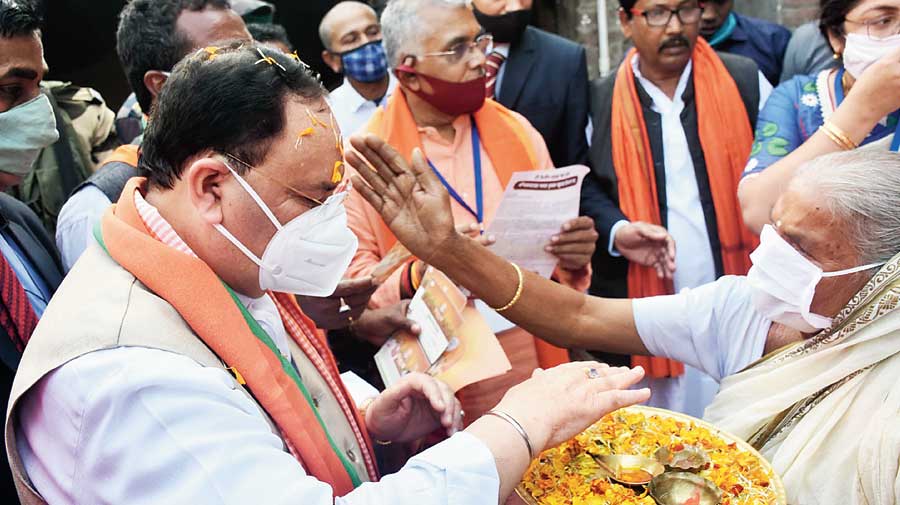 JP Nadda accepts blessings from an elderly woman while on his mission to collect a fistful of rice in Katwa.
Arka Banerjee
Snehamoy Chakraborty   |   Katwa   |   Published 10.01.21, 03:54 AM

BJP national president J.P Nadda on Saturday collected “ek mutho chaal” (a fistful of rice) from farmers to launch a party event to woo the peasantry in Bengal with an eye on the Assembly polls amid the ongoing farmer protests in Delhi against the Centre’s farm laws.

Launching the farmers’ outreach programme, Nadda defended the farm laws saying that they were aimed at ensuring “freedom for the farmers” before explaining the “ek mutho chaal” event at a public rally at Katwa in East Burdwan. He held a well-attended roadshow in Burdwan later in the day.

He also used the occasion to launch an attack on the Mamata Banerjee government for delaying the rollout of the PM-Kisan scheme in Bengal.

Many insiders in the BJP said the launch of the event in Bengal’s rice bowl East Burdwan was planned to woo the farming community that has backed Mamata since her Singur and Nandigram movements against forcible land acquisition.

Another farmer Mathura Mondal looked equally lost when asked if he had any idea about the benefits Nadda spoke of.

“He gave me a leaflet and pasted a sticker on the wall of our house,” Mathura said, adding he was yet to learn what the BJP wanted to do for farmers.

Many at the rally returned home with the same confusion. “I own no land but I love Modi. I am holding this placard to support farm laws as I love Modi,” said Bishu Pradhan, a farmer from Gourdanaga village of Katwa.

Nadda used every minute of his speech and a news meet later to convince the farming community in Bengal the need to “embrace the BJP” and “throw out Mamata” for the farm sector's benefit. On the Delhi protests, he stressed the Centre was continuing its dialogue with the farmers to find a resolution to the impasse.

“Your presence in huge numbers is proving that Mamata’s departure is certain,” said Nadda at the rally. At the news meet, he said that the people’s spontaneous support for the party was proof that the BJP would sweep the polls. “The people of Bengal have made up their mind to reject Mamata.”

In his first visit to Bengal after his convoy was attacked on its way to Diamond Harbour last month, he said the manner in which he faced the attack and later “abused by the chief minister” and her party did not gel with Bengal’s culture.

“The language used by the chief minister against me or our Prime Minister does not reflect Bengal’s culture. We represent the true culture of Bengal… Don’t forget that Syama Prasad Mookerjee, a Bengali, was the founder of Jana Sangh,” he said, before stressing that Bengal’s people didn’t approve the outsider tag Trinamul leaders were putting on BJP leaders. Nadda, married to a Bengali, also stressed he has “lived” the Bengali culture.

The BJP seemed to have flagged off its election campaign in the hills through Prahlad Singh Patel, the Union minister of state for tourism and culture. BJP ally in the hills GNLF lined up party supporters in Darjeeling to welcome the minister on Friday. Trinamul said Patel had gone as a tourist.