City mountaineer Rajib Bhattacharyya, who had scaled Mount Everest and Kanchenjungha, died on Thursday during an expedition to Dhaulagiri, the seventh highest peak in the world. 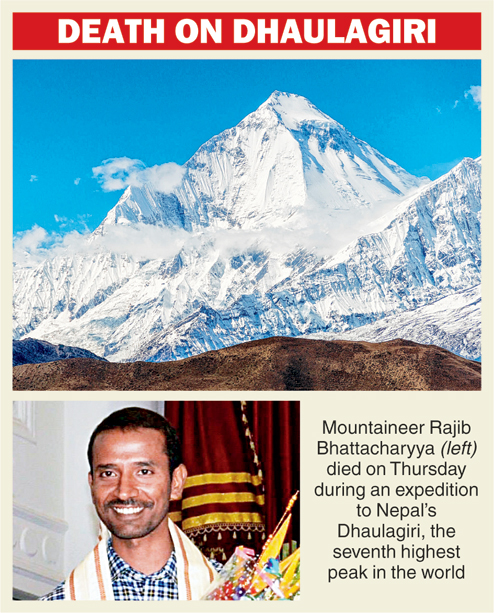 City mountaineer Rajib Bhattacharyya, who had scaled Mount Everest and Kanchenjungha, died on Thursday during an expedition to Dhaulagiri, the seventh highest peak in the world.

The 43-year-old was descending when he died but it is not yet clear whether he had reached the 8167m summit in north-central Nepal. His body is still on the mountain.

"He died on Dhaulagiri, at an altitude of 7500m, while descending. He had complained of snow blindness and become very weak," Penba Sherpa, a manager of Seven Summit Treks, the agency that had organised the expedition, told Metro over the phone from Kathmandu.

"We are not sure whether he reached the summit. One of the climbers said Bhattacharyya had felt weak and decided to come down. We will know the details only after the mountaineers and the sherpas return to Kathmandu."

Snow blindness is temporary loss of vision caused by over-exposure to ultraviolet rays of the sun. The loss of eyesight at that altitude impedes a climber's movement and worsens the exhaustion.

According to Seven Summit Treks, Bhattacharyya had started from Kathmandu on April 15 and from the base camp on April 17.

Bhattacharyya, whose climbing experience spanned two decades, was the lone Indian in a five-member team. The other mountaineers were from Australia and Iran.

The Dunlop resident, who worked in a jewellery shop near Hatibagan, is survived by his mother.

"He was very passionate about mountaineering,'' said Everester Ujjal Ray, the officer-in-charge of Gariahat police station who has accompanied Bhattacharyya on several climbs.

"He was very lean but steady on the mountains and always ready to lend a helping hand. He would collect gems and precious stones and sell them to fund his climbs. Often, he had to take loans to bear the expenses."

Bhattacharyya had to gather Rs 10 lakh for the Dhaulagiri climb.

This was Bhattacharya's second climb with Seven Summit Treks, the first being his Kanchenjungha (8586m) ascent in 2014.

Ray, the honorary advisor to the West Bengal Mountaineering and Adventure Sports Association, said a three-member team from Bengal would leave for Kathmandu to coordinate with the Nepali authorities in bringing down Bhattacharya's body from Dhaulagiri.

"I have spoken to the owner of the agency (Seven Summit Treks). He said the weather should be good for a helicopter to bring down the body. They need competent sherpas as well. Since this is the mountaineering season, it is difficult to find that many competent sherpas," explained Ray.

In May 2013, Singha Roy had fallen sick at an altitude of 7900m while trying to climb Dhaulagiri. He could not breathe properly and almost ran out of supplemental oxygen. A sherpa finally brought him down.

In May 2014, another Everester from Bengal, Chanda Gayen, 32, went missing while trying to reach the summit of Kanchenjungha West (8,505m) after climbing Kanchenjungha.