The sleuths first interrogated the caretaker of the property, Nikhil Das, and his wife Jharna to get land-related papers, documents and keys of the house 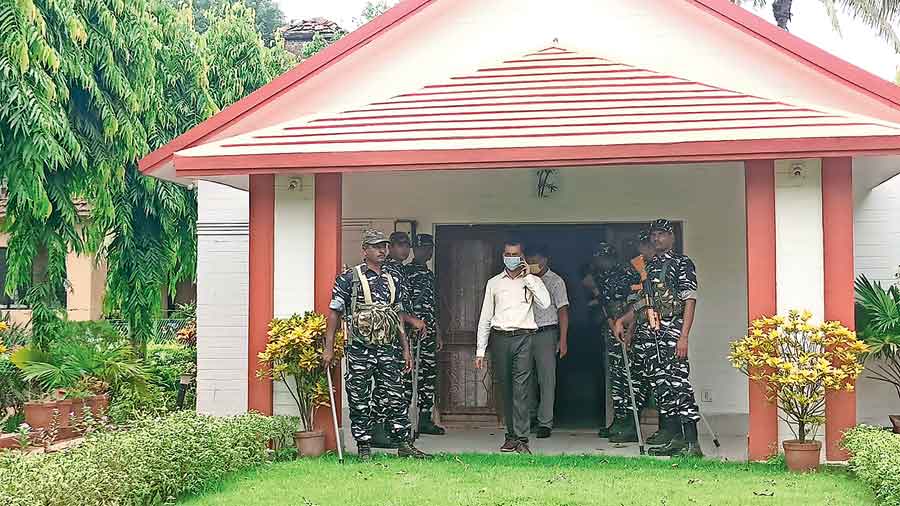 Security personnel at the house in Santiniketan during the ED raid on Wednesday.
Picture by Amar Nath Dutta
Snehamoy Chakraborty   |   Calcutta   |   Published 04.08.22, 01:40 AM

The Enforcement Directorate on Wednesday raided a property in Santiniketan that had been purchased jointly by Partha Chatterjee and Arpita Mukherjee in 2012 and visited two more houses, which used to be frequented by the duo regularly, in the area.

A team of ED officials reached the property around 11am and started a search. The sleuths first interrogated the caretaker of the property, Nikhil Das, and his wife Jharna to get land-related papers, documents and keys of the house.

A source said the investigators had inspected all corners of the houses and collected a few documents, including a bank statement. The officials also dug up a portion of land in the garden, which was apparently aimed at finding out whether cash, ornaments or property-related documents were kept underground.

After a search for around eight hours, the ED officials left the house with several documents. “They searched every corner and asked us to hand over anything related to this house to them.… They also dug up a portion of our garden,” said Jharna, who added that she and her husband had been caretakers of the house for the past five years.

ED sources have said there are around seven properties belonging to Chatterjee, Arpita and some other associates of the former minister in Santiniketan and Bolpur.

The central agency is trying to map the properties to get an idea of whether the money from the alleged SSC scam was used in purchasing land or houses in the university town.

Nikhil, the caretaker of property, accompanied a few ED officials to two more houses — around a kilometre away from the first one — where the former minister and Arpita used to spend time during their visits.

Sources said one of the two houses that ED spotted on Wednesday belonged to a Calcutta-based contractor, known to Chatterjee for years, and he had developed many properties in Calcutta, too.

Multiple teams of the CBI and the ED on Wednesday raided the houses of a Trinamul Congress leader at Nanoor in Birbhum district and a stone-merchant — both known as close to Trinamul district president Anubrata Mondal — in connection with cattle smuggling cases.

Around two dozen sleuths, along with paramilitary personnel, reached Ratan Kuthi guest house of Visva-Bharati and later left for several locations in the district, including Suri, Nanoor and Mohammed Bazar.

The investigators reached the house of Kerim Khan — a functionary of Birbhum zilla parishad — at Santra village near in Nanoor where they interrogated the family members for over six hours in the cattle smuggling case. The team also visited the house of Muktar Sheikh, a Trinamul worker who reportedly looks after the sand businesses belonging to Khan’s son. Sources said the sleuths had seized Muktar’s mobile phone after interrogating him for an hour.

On the other hand, three groups of the officers from the CBI and the ED raided the houses of Tulu Mondal, a stone merchant. They also raided a petrol pump owned by Mondal at Mohammad Bazar.

Sources said the CBI had got their names during the investigation of the Bogtui massacre and had been trying to find out the money trail from different illegal sources like stone and sand smuggling along with the existing cattle smuggling case.

Sources said a team of CBI officials would stay in Birbhum to conduct further raids from Thursday morning.

Bengal on Wednesday reported 911 Covid-19 infections, 2,041 recoveries and four deaths. At present, there are 11,120 active cases in the state, including 10,803 in home isolation and 317 at hospitals, according to a state bulletin.The state’s recovery rate was 98.45 per cent and mortality rate 1.02 per cent on Wednesday. The case positivity rate was 6.85 per cent on a day 11,808 samples were tested.On Wednesday, 2,52,594 Covid vaccines were administered across Bengal.