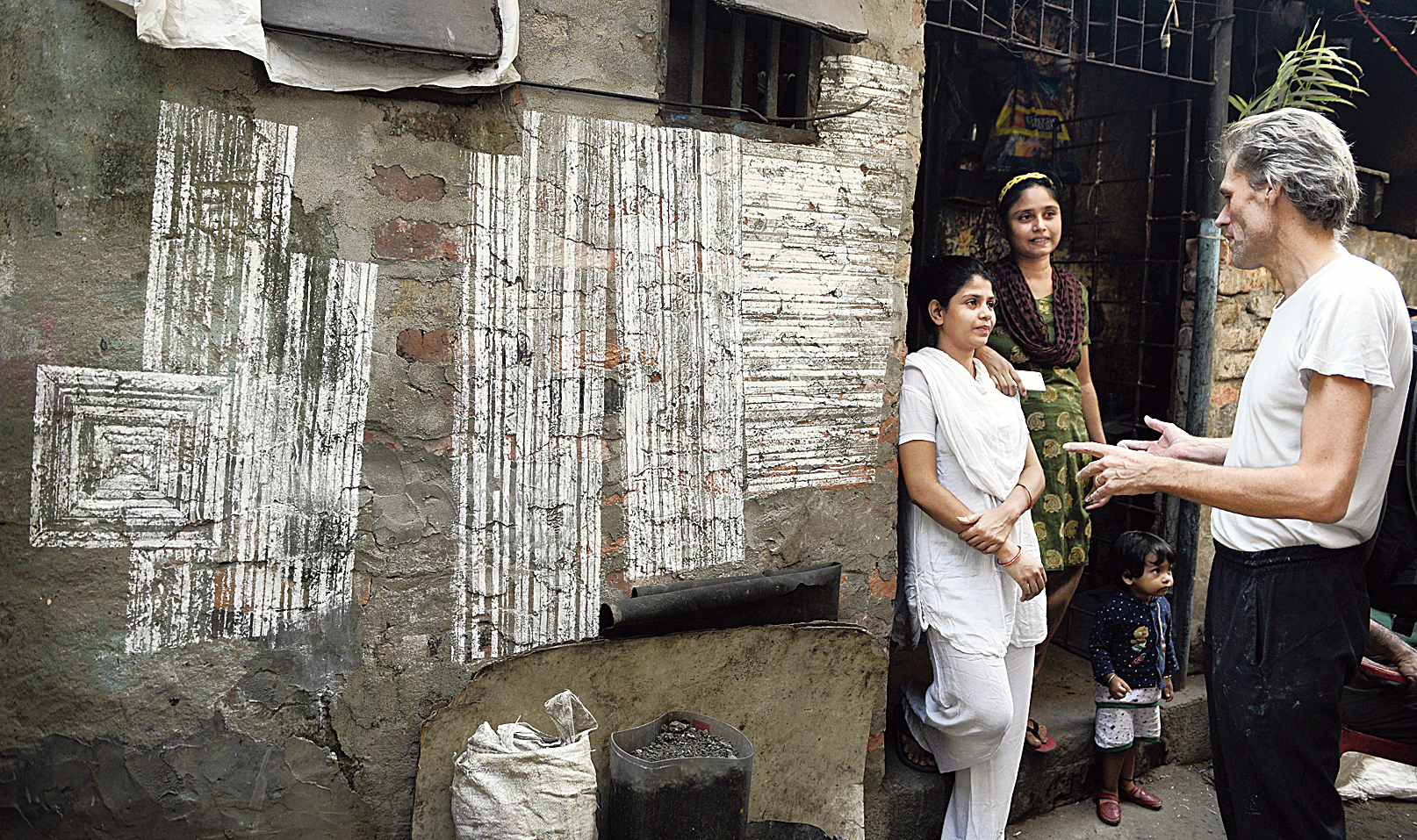 Strips of abstract white lines in chalk — horizontal, vertical, parallel and perpendicular — have appeared on walls along Palm Avenue near its intersection with Broad Street over the past couple of months. Similar lines adorn the barebones brickwork of several shanties in the area.

At first glance, this looks like the handiwork of a house painter having a patchy day at work. A closer look and broader interpretation reveals a pattern.

These are no ordinary chalk lines. They form an enigmatic Dutch artist’s body of work, spanning cities and continents and linked by a vision of every place in the world being connected by a straight line.

“The nearest connection between two points is a straight line. The idea behind my work is the same: to connect with people and places,” Bart Lodewijks told Metro earlier this week in a rented apartment on Palm Avenue, his home since September 21.

Bart has travelled around the world armed with chalk and a spirit level, the two tools of his artistic expression. Apart from making chalk drawings in public and private spaces, he likes documenting his experiences in the cities he has worked in.

Bart mostly uses urban environments as the canvas for his lines. Sligo, a coastal seaport in north Ireland, Ghent and Brussels in Belgium, Rio de Janeiro, London and Lisbon are some of the places he has worked in.

When Metro met him, he was drawing on the walls of a Palm Avenue shanty.

Going by the response of the residents, the Dutchman seemed to have gained popularity in the neighbourhood along with the one thing he always seeks: trust.

“My daughter shares her birthday with him. We had invited him for the small celebration in our house on November 11. He loved the biryani,” said Seema Begum, one of the occupants.

“The locals had taken me for a madman during the first couple of days. But they have been extremely gracious since,” Bart said.

The reception hasn’t been as good everywhere, though. The owner of a bungalow in Ballygunge was furious when he approached the person for permission to paint the walls “More than once, house owners drove me away. But after reading about me on the Internet, some of them reached out, saying they had no problems with me drawing on their walls or even inside their homes,” said Bart.

Bart’s visit to Calcutta — he left for Belgium on Thursday — was part of a project of the Calcutta Art Research Foundation, set up by Praneet Soi, an Indo-Dutch artist from Calcutta, and supported by the Mondriaan Fund.

One of Bart’s jottings from his Calcutta diary shows the connection his lines have already made. “I feel like I’m too close to the occupants’ private lives as I’m drawing, but they say it doesn’t bother them...”