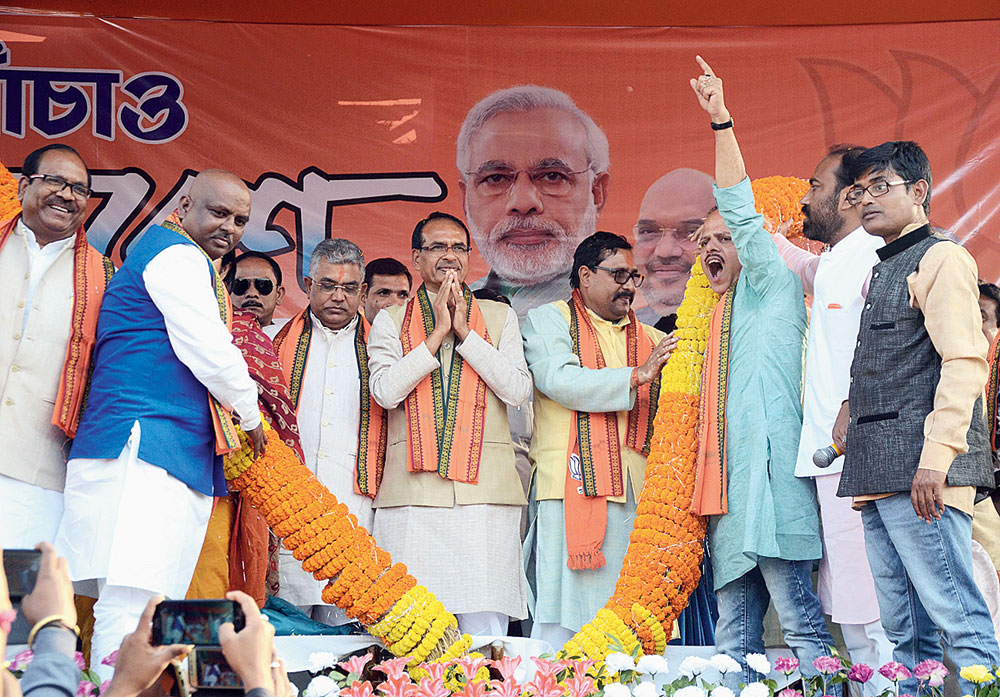 Former Madhya Pradesh chief minister Shivraj Singh Chouhan came down heavily on the Mamata Banerjee government, terming it “corrupt” and promising the BJP would not stop until her regime is ousted.

Chouhan, the national vice-president of the BJP, attacked the Mamata administration allegedly for denying permission for landing of helicopters of senior BJP leaders and their rallies forcing the saffron camp either to cancel the rallies or to make alternative arrangements.

“The more you (Mamata) try to stop us, the more often we shall come to Bengal,” Chouhan said addressing a rally in West Midnapore’s Mohanpur on Wednesday.

Making a mockery of the “mahagathbandhan” (grand alliance of the opposition parties) that had rallied to the Brigade Parade Grounds in Calcutta on January 19 and many among them rushing to Mamata’s dharna to show a united fight against the Narendra Modi government at the Centre, Chouhan termed it as “Bina dulhe ki baraat (a wedding entourage without a groom)”. “Mamataji please tell us who will become the Prime Ministerial candidate of this grand alliance,” Chouhan added.

Chouhan reached Mohanpur by road, travelling about 130km in car from Calcutta airport after his chopper was denied landing permission in both the places of his scheduled meetings – in Murshidabad’s Behrampore and West Midnapore’s Mohanpur on Wednesday.

The Bengal unit of the BJP was forced to cancel the rally at Behrampore.

“We had no other option but to cancel the Save Democracy rally in Behrampore today. It would not have been possible for Shivrajji to travel by road to both venues. So, we had to opt for the nearest one from Calcutta airport,” said BJP state general secretary Sayantan Basu.

On Tuesday, Basu had threatened to move Supreme Court against the state government alleging “contempt of court” against Mamata government for “non-cooperation” with the BJP in regard to holding Save Democracy rallies across Bengal.

“It is not new today that we were denied permission for either landing of choppers or holding rallies in Bengal. It had all started with our national president Amit Shah’s rally in Malda. But a permission was given eventually for Shah’s helicopter landing. However, permissions for landing of helicopters were not given to Union minister Smriti Irani, Uttar Pradesh CM Yogi Adityanath and our national spokesperson Shahnawaz Hussain,” Basu said.