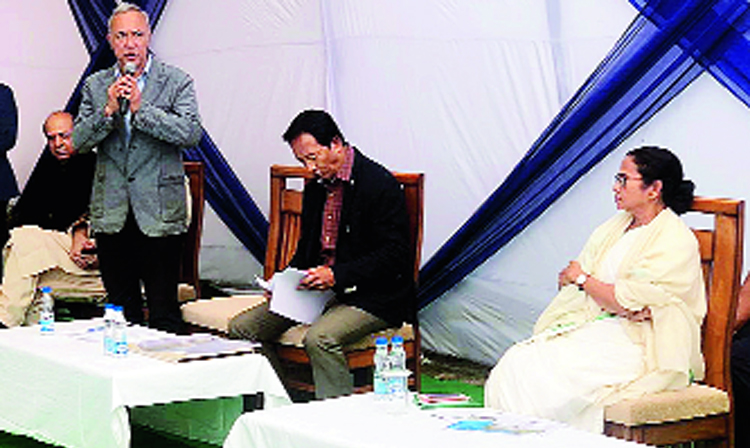 Mamata and Tamang during the foundation laying in New Delhi on Wednesday
The Telegraph picture
Vivek Chhetri   |   Darjeeling   |   Published 14.02.19, 12:40 PM

Bengal chief minister Mamata Banerjee on Wednesday laid the foundation stone of a building to be constructed by the Gorkhaland Territorial Administration in New Delhi for the stay of Darjeeling people visiting the Capital.

The Gorkha Welfare Centre at Saket in Delhi is likely to be completed in two years. The estimated cost of the project is Rs 20 crore.

GTA chief Binay Tamang was present at the programme. “The land in Delhi had been with the Darjeeling Gorkha Hill Council and the GTA for the past 18 years. However, not much attention was paid to the property and it had been encroached by land sharks.”

Following a favourable verdict managed by the present GTA administrators from Delhi High Court recently, encroachers were evicted from the property.

“The new building will have 32 rooms with conference hall, library and other facilities. We plan to complete the project in two years,” said Tamang.

Mamata said: “I am happy for brothers and sisters from the Darjeeling hills. Students and those facing medical problems can use the centre. It would be an asset of the hill people.”

“We have also handed over Pahari Bhavan at Matigara (in Siliguri) to the GTA,” added the chief minister.

The Pahari Bhavan had been built by the Bengal government.

The DGHC has constructed Gorkha Bhavan at Safdargunj in New Delhi but it has only six rooms.

“The space is not enough at the Gorkha Bhavan. Once this project (Gorkha Welfare Centre) is completed, 72 people can be accommodated at one point of time,” said Tamang.

Apart from Tamang, Anit Thapa, the vice-chairman of the board of administrators to run the GTA, and heads of various development boards in the hills were present at the ceremony.

Later in the evening, Mamata and Tamang attended a dharna organised by the Aaam Adami Party (AAP) at Jantar Mantar in Delhi.