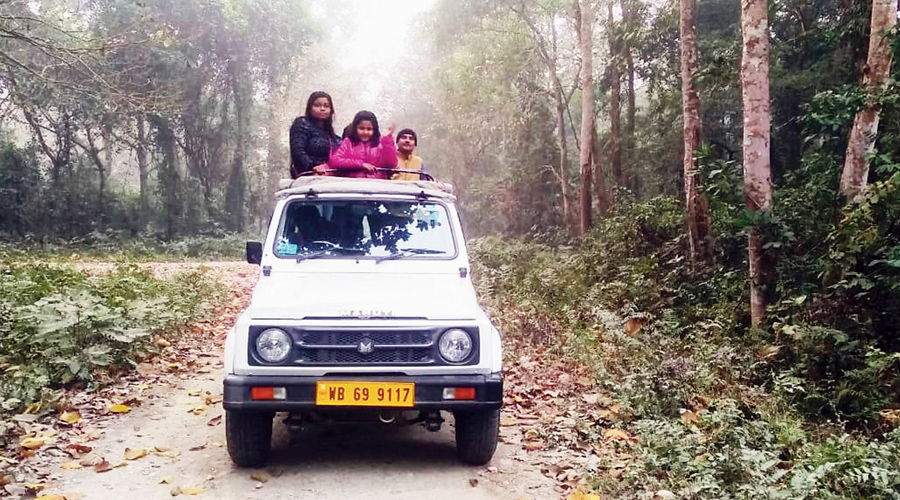 A vehicle carries tourists on the safari at the Chilapata forest in Alipurduar on Tuesday.
Picture by Anirban Choudhury
Our Correspondent   |   Alipurduar   |   Published 13.01.21, 01:09 AM

The popular jeep safari at Chilapata forest in Alipurduar district resumed on Tuesday afternoon after a gap of seven days, much to the elation of tourists and stakeholders associated with the sector.

The safari was closed since last week as some villagers had locked the forest range office to protest the alleged anomalies in the recruitment of contract workers by the state forest department.

“It is the same range office from where permits are issued for the (jeep) safari. As it was closed, the safari, which is the main attraction for tourists visiting Chilapata, had also stopped,” said a resort owner of the area.

The villagers who locked the range office — some other forest range offices in the Dooars have also been locked up by aggrieved residents on the same issue — had also resorted to an indefinite demonstration. They alleged that instead of engaging local youths as contract workers, the department was engaging outsiders.

These protests had kept forest employees away from the office. As the impasse continued and people running accommodations and cabs in the area continued faced losses, a delegation of them held a meeting with protesting villagers.

In all, around 1,500 people in the area are associated with the tourism sector, directly and indirectly.

“We told villagers that keeping the range office closed is harming everyone. Half of the revenue collected by the forest department (from the safari) is provided to the forest protection committees and eventually spent on development of nearby villages. Also, we told them that many residents from villages depended on the tourism sector and their earnings were hit,” said Ganesh Sha, secretary, Chilapata Lodge Owners’ Association.

The meeting was positive because on Tuesday morning, the villagers went to the range office and unlocked it.

After opening the office, villagers said they realised that by locking the office they have realised the problems faced by those associated with tourism. “Many local youths are waiters, cab drivers and guides. Many shops depend on tourists. That is why we decided to reopen the office,” said Ravi Rava, a resident of Andu, an adjoining village.

“As far as our demand is concerned, the divisional forest officer (of Jaldapara wildlife division) has communicated with us and will meet us on January 15 on the issue,” Rava added.

As the news spread, foresters posted at the range joined the office. They also issued permits for the safari conducted in the afternoon hours.

“It is a huge relief for us. Tourists are flocking to north Bengal, both in the hills and in the Dooars. These past few days, many groups have left early or cancelled their bookings after knowing they cannot avail the safari. We believe that now the situation will start improving from Wednesday,” said a cab owner.