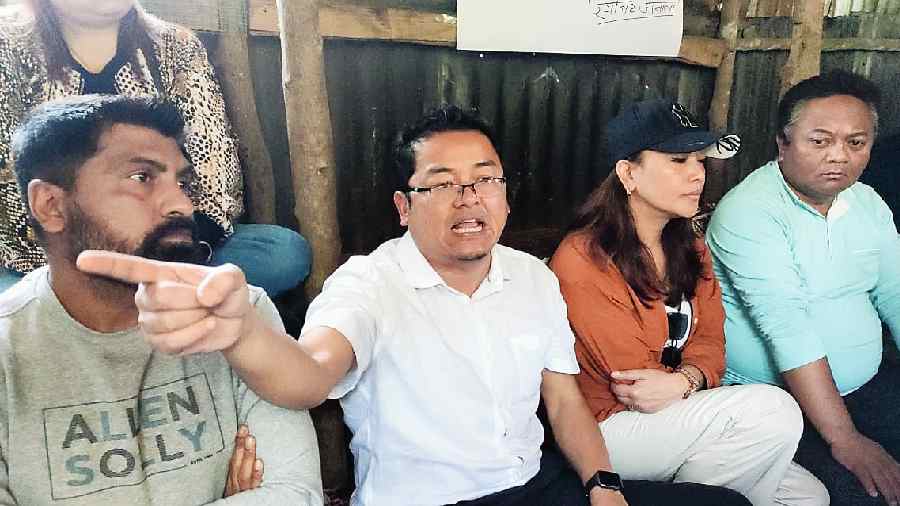 A tea garden near here witnessed a rare scene of protest when a sizable number of workers started a relay hunger strike demanding the closure of the estate that reopened on Friday after a gap of six months and renegotiation of terms and conditions under which the resumption of operations in the plantation were agreed on.

Along with the 18 workers who were on the fast, Hamro Party president Ajoy Edwards and his wife Namrata also started indefinite hunger strike in the Kanchan View tea garden in solidarity with the agitators.
In north Bengal, workers generally resort to agitation demanding the reopening of tea gardens which are closed for various reasons.

Of 99 workers on the rolls, only 15 reported for duty in the Kanchan View garden on Friday. Work had been suspended on the estate since October 6, 2021.

Edwards and the wife said they would fast until the garden was closed and fresh negotiations started.

Some workers and members of the social organisation called Goan Sudhar Sammela (GSS) have questioned the working of trade unions in the garden.

The management’s proposal to set up a Rs 100-crore resort on the estate and the purported move to give prominence to tourism over tea also came under glare.

Jiten Rai, advisor to the GSS, said “majority” of the workers protested the unions’ decision to agree to reopen the garden from Friday without proper terms and conditions.

A meeting was held in the additional labour commissioner’s office in Siliguri on April 6 where it was decided that the garden would reopen soon.

“The majority of the workers are against the agreement as specific terms have not been mentioned. Experiences in the garden, which repeatedly closed in the past, make us believe that the agreement is not in favour of the labourers,” said Rai.

Edwards alleged that unions leaders were hand in glove with the management. “They are not working sincerely for labourers’ welfare.”

The garden is just 3km away from the Darjeeling town.

Rai and his team have raised nine demands related to workers’ benefits.

The GSS also believes that the resort should be built according to the provisions of tea tourism policy with enough safeguards for the workers.

Ajit Agarwala, the lessee of the tea garden, however, alleged that certain people who had illegally occupied government/tea land were leading the protests over vested interests.

“Why should one ask the garden to be closed for negotiations. Demands can be placed and talks can be held even when the garden is running,” said Agarwala.

The Kanchan View management has claimed that of the 377 acres of the garden land, tea is being cultivated on 200 acres. “However, the production had come down from 1 lakh kg of made tea per annum to 3,000 kg of tea because of the dearth of workers,” said Agarwala.

The management also claimed the tourism resort was coming up “only in an area of 24 acres” and the land specified for the project was not under plantation according to the land reforms report in 2005. “The tourism project was sanctioned in 2005,” said Agarwala.