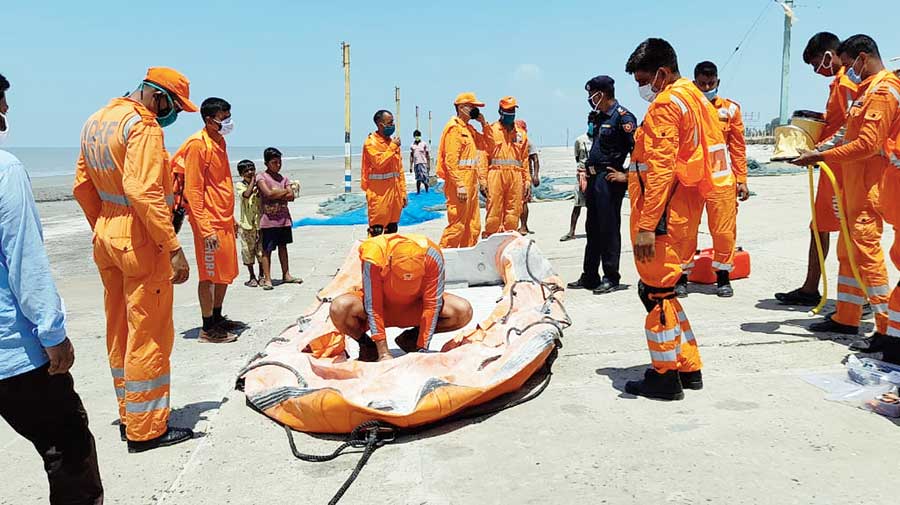 An NDRF team on duty in Sagar of South 24-Parganas on Saturday, ahead of Cyclone Yaas likely to hit Bengal on May 26
Telegraph picture
Snehamoy Chakraborty, Anshuman Phadikar   |   Calcutta   |   Published 23.05.21, 02:30 AM

The administration in South 24-Parganas has distributed two dozen satellite phones in the district’s remote islands and areas ahead of Cyclone Yaas, to ensure early transfer of information, the lack of which was a liability during Amphan last year.

Officials said that during Amphan, which had hit and ravaged the coastal district on May 20 last year, there were only three satellite phones in the district. This led to a lot of trouble communicating with the affected areas, delaying the process of restoring electricity and other emergency services.

“Communication is the most important tool to take rapid action after any disaster. So, this time we have secured 25 satellite phones instead of the existing three that we had last year. The satellite phones would be available with the police and block officials in the  remote areas of Sagar island, G-plot and Mousuni island. It will help us communicate with remote areas even if general telecommunication is hit by the cyclone,”said P. Ulaganathan, district magistrate of South 24-Parganas.

“We have also asked the service providers of each mobile company to keep a team on the ground instead of in Calcutta,” added Ulaganathan, who held back-to-back meetings with officials in Sagar Island on Saturday as part of the extensive preparations for the upcoming Cyclone Yaas.

A satellite phone or satphone connects with other phones through radio orbiting satellites.

Satellite phones can’t be used without prior permission from the telecom ministry and their use is restricted within government officials and people engaged in emergency services.

Officials said that according to norms, the administration applied for 22 additional satphones from the telecom ministry that then gave the necessary permission.

Officials said that after any cyclone, mobile or general telephone services get disrupted in the affected areas because of damage to electric and mobile towers. During Amphan, the government was in the dark about the intensity of damage caused by the cyclone as the local administration and police in remote areas could not be reached in the  lack of telecom services.

“This was a lesson from Amphan. If we come to know about the actual situation in remote areas, we can deploy the NDRF (National Disaster Response Force) fast to rescue people or restore emergency services. We think this time the number of satellite phones will help us a lot even if Yaas damages normal telephone services,” said a senior official in Sagar.

Like South 24-Parganas, the East Midnapore administration will have three satellite phones. The district had only one during Amphan.

“We will get the two (sanctioned) satellite phones from Calcutta tomorrow (Sunday) morning. We have asked mobile service providers to keep teams on the ground at least three days before the cyclone is likely to make its landfall,” said Mrityunjay Haldar, the officer in charge of disaster management in East Midnapore.

The coastal districts seem better placed this time in another vital aspect as well.

Officials said that unlike last year during Amphan, the NDRF teams have already been deployed at pockets like Sagar, Gosaba, Kakdwip in South 24-Parganas and Ramnagar and Digha in East Midnapore to map the areas where the cyclone is likely to hit with its full intensity.

“Three NDRF teams have taken their position in our district and four more teams are on the way,” said a senior official in South 24 Parganas.

In East Midnapore, two NDRF teams have taken their position and are involved in sensitising people about the cyclone and precautions to be taken beforehand.