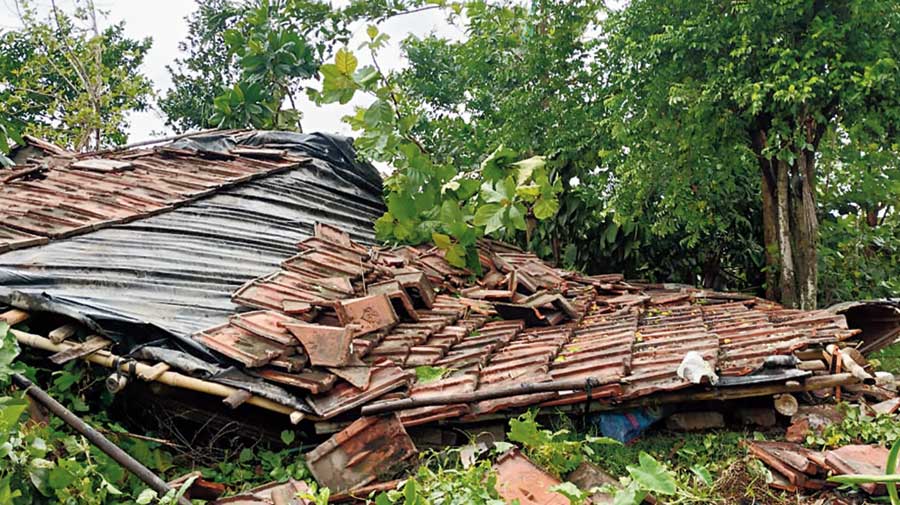 Two persons died of suspected electrocution and scores of houses were damaged as a giant rotating mass of wind swept the Naihati-Bijpur-Halisahar belt in North 24-Parganas and parts of Hooghly district on Tuesday afternoon.

To many, the marauding mass of winds looked like a tornado, a rotating column of air that resembles a funnel and is infamous for lifting houses, cars, humans and animals alike in the US. The Met office in Alipore was not so sure.

A tree uprooted in the storm at Jethia
Tapash Karmakar

The two have been identified as Kamal Majhi and Swapan Baul Das. But a local resident said: “They were hit by lightning.”

Met officials in Alipore said the IMD did not have conclusive pictures or videos of the storm to label it as a tornado.

“From the pictures and videos that we have seen, the system looks cylindrical. The width of the base and the head is similar. But a proper tornado looks like a funnel, with a broad top and narrowing base,” said G.K. Das, the director of IMD, Calcutta.

Das told The Telegraph that the system could also have been a mesocyclone, a rotating region in a supercell — among the most potent thunderclouds — that often leads to a tornado.

Tornadoes, also called twisters, are vertical funnels of rapidly spinning air connecting a thunderstorm and the ground. Born in thunderstorms, tornadoes occur around the world but most frequently in the US. A moderate tornado can trigger a windspeed of 100kmph but the potent ones are capable of triggering winds that clock speeds of up to 400kmph. A powerful tornado can tear up almost anything that comes in its path.

Dushyant Nariala, the principal secretary of the disaster management department, said that 47 houses had suffered the impact of the “tornado” in Hooghly.

Bandel and Pandua in Hooghly were hit by the storm, which struck after 3pm. In North 24-Parganas, Jethia gram panchayat in Naihati, Bijpur and four wards (16, 17, 22 and 23) of Halisahar municipality bore the brunt of the storm.

The account of several local residents suggested the extent of damage was more than the official estimate.

“In (Jethia, North 24-Parganas) Balibhara village, around 150 houses, including pucca ones, were damaged as either roofs of these buildings were flown away within seconds or walls collapsed because of the gusts of wind,” said a resident of the village.

A giant banyan tree, uprooted along with the concrete base, came crashing down on a home with a tiled roof. The kitchen of another house had its roof completely blown away.

“It was around 3.15 pm and I was watching television after lunch. I felt a jolt and within seconds, the roof of the room flew away,” said Tumpa Bera, a homemaker in Jethia.

The nearest IMD observatory is in Kalyani. “We will have to analyse the videos before coming to any conclusion,” said the IMD’s Das.

Three persons in Mihir De’s family were injured and taken to JNM Hospital in Kalyani when a wall collapsed and the roof was blown away.

“We have shifted the victims to local school buildings and arranged food for them. We are at the same time preparing the list of the persons who lost their houses. We have also taken photographs of the damaged houses. The list and the photographs will be submitted to the district administration so that they can get compensation,” said a member of the outgoing panchayat.