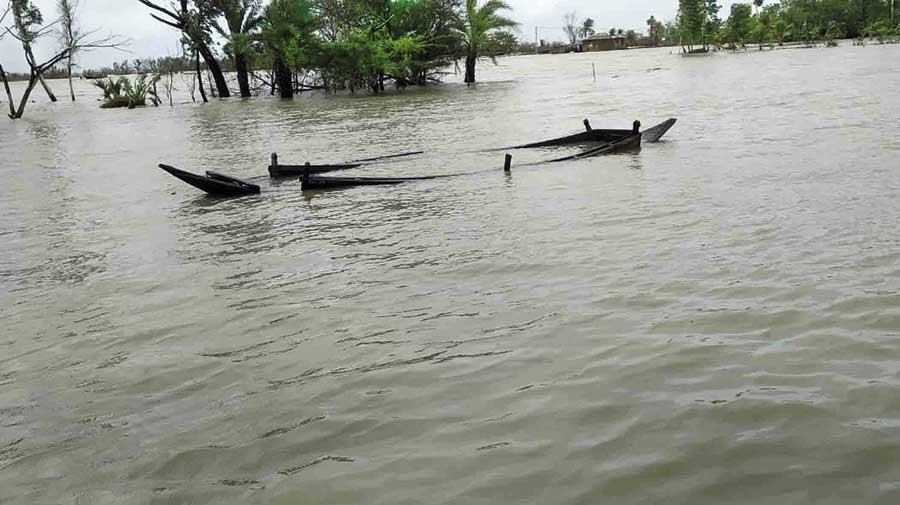 THIS BOAT IS SITTING ON LAND, NOT IN THE RIVER: A submerged boat, which had been moored to the banks as a precaution, shows the sweep of the inundation of Bankimnagar village at Sagar in South 24-Parganas on Wednesday. The impact of Cyclone Yaas sent water surging from the sea, flooding the village located around 118km from Calcutta
Telegraph picture
Our Bureau   |   Calcutta   |   Published 27.05.21, 12:59 AM

A clear picture of the damage in the four districts is yet to emerge. The impact in Calcutta was confined to a few uprooted trees while a high tide caused limited flooding.

Preliminary reports indicated that more than 1 crore people had been affected in the state, at least 3 lakh houses were damaged and large swathes of the four districts had got inundated following breaches in embankments.

A senior official said that as soon as the Bengal administration was alerted about the cyclone last week, it had made “unprecedented” arrangements to ensure Yaas didn’t repeat the devastation Amphan had caused a year ago.

The official said that whenever the Met office predicts natural calamities, the administration follows a standard operating procedure, evacuating people from vulnerable areas and alerting departments like power, irrigation and disaster management. 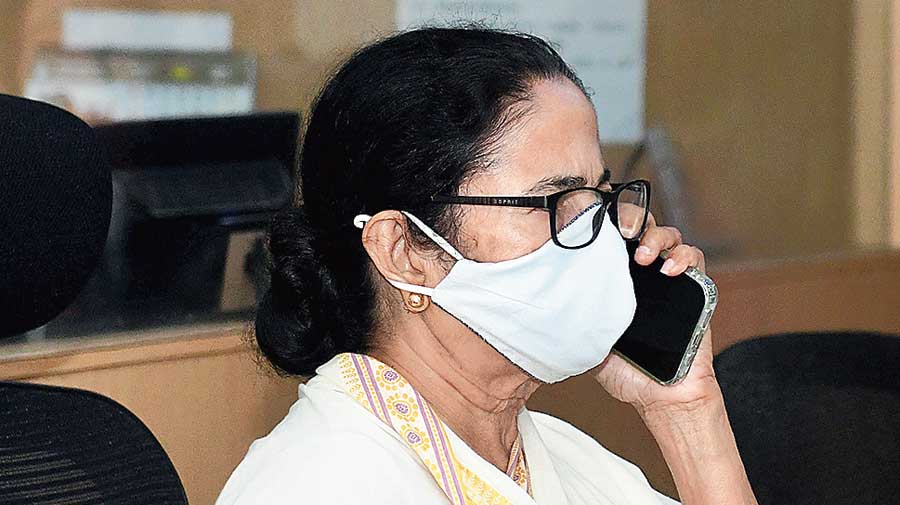 “But what happened this time was unprecedented, with the chief minister herself at the helm of all the preparations being made,” the Nabanna source said.

He said that with Mamata announcing in advance her intention of monitoring the situation from the control room through the night, a message had gone down to the lowest rungs and the entire system was galvanised.

On Wednesday, after sharing with journalists the preliminary assessments of the impact of the cyclone, Mamata said: “Officers are busy saving lives and that’s the priority.... They will send a detailed analysis of the damage later and we shall get a clear picture of what happened.”

While Yaas did not strike Bengal with the fury of Amphan, multiple sources in the state government said the chief minister’s insistence on micro-managing the preparedness did play an important role in containing the damage.

“We strengthened 107km of embankments, evacuated nearly 15 lakh people and asked farmers to harvest their boro paddy at the earliest,” a senior official said.

“We began preparing from May 18 when the first alert on the cyclone reached Nabanna. This not only saved hundreds of lives but ensured a much lower impact on livelihood.”

The irrigation department was the first off the blocks. It held a meeting on May 18 itself and decided to start repairing 107km of river embankments immediately, with a May 24 deadline.

“The work was completed on time. Had the repairs not been done, more areas would have gone under water today,” a source said.

Agriculture was the second department to get cracking, advising farmers on May 19 to harvest their boro paddy before May 25 as the cyclone had the potential to damage standing crops.

The department carried out a massive campaign in the rural belts of East Burdwan, Hooghly, Birbhum, Nadia and Hooghly, where most of the boro cultivation is done. A similar exercise was conducted in north Bengal.

“I was waiting to hire a few more labourers before I began harvesting my crop. But after the announcements by the local agriculture department, I didn’t wait,” said Kamal Roy, a farmer in Nadanghat, East Burdwan.

An official said: “District officials began readying flood shelters and cyclone shelters. When they realised more buildings would be needed to ensure physical distancing amid the Covid crisis, more than 500 school buildings were taken over and converted into shelters.”

To ensure smooth evacuation, the authorities started an awareness campaign from May 22 and continued with it till Tuesday evening.

“We wanted to let people know that the cyclone could be deadly and they should not hesitate to move to a safer place,” a district magistrate said.

“In order to make the people comfortable, we arranged for generators at the flood shelters and opened community kitchens to give them a feel of home.”

The state government also got in touch with the army to have troops deployed in several places ahead of the cyclone so that rescue missions, if necessary, could be launched at the earliest.

“Last year, the army was called in only after Cyclone Amphan had struck Bengal. This year, the army was contacted in advance. This proved wise, for the army and the NDRF (National Disaster Response Force) rescued thousands of people in places like Haldia that got inundated unexpectedly,” a government source said.